Cardinal Hummes on the Synod: Don’t Fear What is New 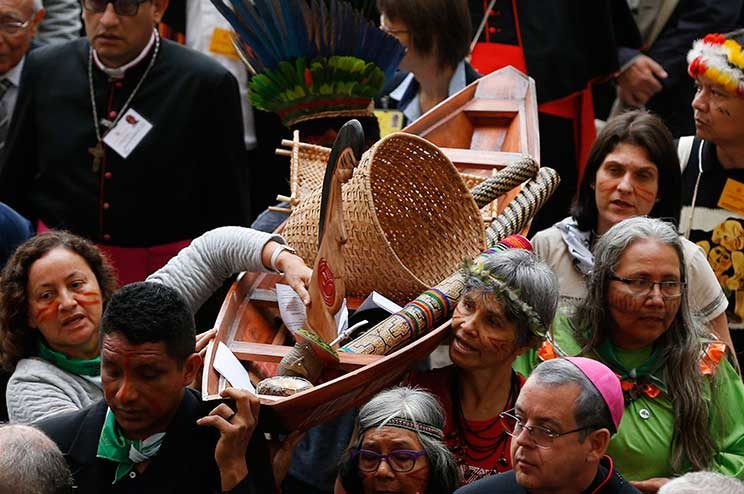 People carry a small boat in a procession at the start of the first session of the Synod of Bishops for the Amazon at the Vatican. (CNS photo/Paul Haring)

By Barbara Fraser – With its mandate to seek “new pathways for the church and for an integral ecology,” the Synod of Bishops for the Amazon follows Pope Francis’ call for the church to move forward without fear, Brazilian Cardinal Claudio Hummes told participants.

Speaking at the synod’s opening session, Cardinal Hummes identified key issues for the synod based on consultations held in church jurisdictions in the nine Amazonian countries over the past year and a half.

Near the end of this speech, he added a comment not in the prepared text, reminding participants that “ecclesial communion is constructed and preserved with Peter and under Peter, with the pope and under the guidance of the pope. That is what the Catholic faith says.”

Introducing the themes of the synod, the cardinal said that the church must turn outward and seek new pathways, as well as ways of inserting itself into Amazonian cultures. Synod participants also must consider new ways of providing pastoral care, possibly developing new ministries, in a place with too few church workers.

“The church needs to throw open her doors, knock down the walls surrounding her and build bridges, going out into the world and setting out on the path of history,” Cardinal Hummes said, underscoring the pope’s emphasis on a missionary church.

In times of change, he said, the church’s role is to accompany people who live “on the margins of humankind.”

The church remains loyal to its tradition not by remaining “linked to the past,” but by recognizing its “living history,” in which each generation “enriches this tradition … with their own experience and understanding of faith in Jesus Christ,” Cardinal Hummes said.

In the presynod consultations, indigenous people asked the church to support them in defending their rights.

“Humankind has a great debt toward the indigenous peoples on the planet’s various continents and therefore also in Amazonia,” Cardinal Hummes said.

“Their cultures, languages, history, identity and spirituality are humanity’s wealth and must be respected and preserved, as well as included in global culture,” he added, to applause.

In reviewing the church’s history of evangelisation in the Amazon region, Cardinal Hummes underscored the work of missionaries and members of religious orders and congregations, as well as diocesan priests and laypeople, especially women.

The church also has played a key role in providing education and health care in the region, as well as in fighting poverty and human rights violations, he said.

Nevertheless, he said, a lack of priests results in “an almost total absence of the Eucharist and other sacraments essential for daily Christian life.”

Amazonia is a vast area with few roads, so most travel is by river, which is slow, expensive and often dangerous. Because communities, especially indigenous villages, are widely scattered, many communities receive visits from a priest rarely, if at all.

Participants in presynod consultations “requested that the path be opened for the ordination of married men resident in their communities, while confirming the great importance of the charism of celibacy in the church,” Cardinal Hummes said.

The presynod assemblies also raised the issue of women’s role in the Amazonian church.

“Faced with a great number of women who nowadays lead communities in Amazonia, there is a request that this service be acknowledged and there be an attempt to consolidate it with a suitable ministry for them,” Cardinal Hummes said to applause.

Turning to the theme of integral ecology, he said that the church cannot adequately minister to the people of the Amazon, especially indigenous people, without also caring for the Earth as “our common home.”

They also identified resulting social problems, including alcoholism, violence against women, human trafficking for sex work and labour, erosion of indigenous people’s culture and identity, and poverty, as well as threats against or murders of people who defend the environment or indigenous territorial rights.

“Integral ecology teaches us that everything is connected: human beings and nature,” Cardinal Hummes said, noting that in Genesis, God breathed life into humans made from the dust of the earth.

“All damage done to the earth damages human beings and all the other living creatures on the earth,” he said. “One cannot address ecology, economy, culture and other issues separately.”

Among the many critical environmental issues in the Amazon, Cardinal Hummes highlighted water, which is disappearing or polluted because of global warming, deforestation and the contamination caused by mining and pesticides.

While much emphasis has been placed on the church’s role in remote, rural areas of the Amazon, Cardinal Hummes also stressed the importance of ministry in the Amazon’s growing urban areas.

Cities like Manaus, Brazil, with about 2 million inhabitants, and Iquitos, in Peru, with more than half a million, continue to grow, especially as people migrate from rural communities in search of jobs or education.

Indigenous migrants face “extreme poverty, abandonment, rejection, disdain and denial” and often are “obliged to be invisible,” Cardinal Hummes said, drawing the synod’s attention to the need for urban ministry.

Cardinal Hummes invited the synod participants “to be guided by the Holy Spirit during these days.” Invoking Mary, Queen of Amazonia, he called for prayer, meditation, ecclesial communion and a synodal spirit.

Echoing the theme of service from the opening Mass  he said, “This synod is like a table that God has prepared for his poor, and he is asking us to serve at that table.”