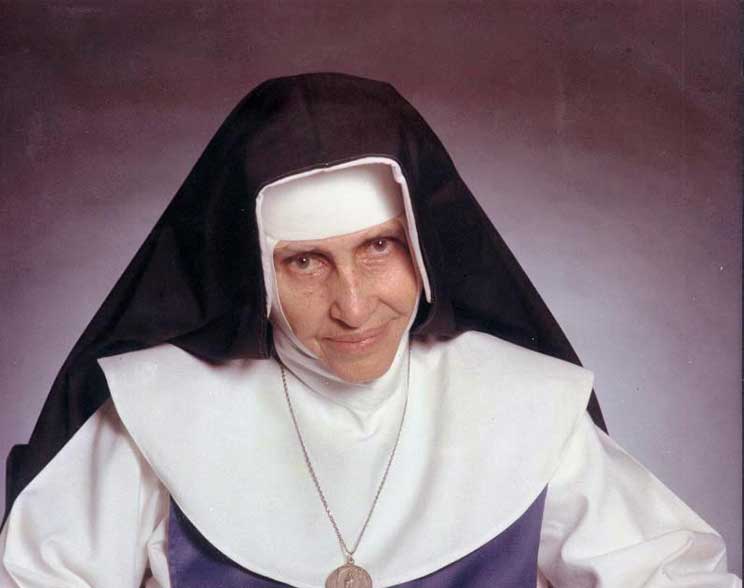 Blessed Maria Rita Lopes Pontes, known to Catholics around Brazil as Sister Dulce, will be canonised by Pope Francis at the Vatican Oct. 13, 2019. Born in 1914 in the northeastern state of Bahia, Sister Dulce is revered for having given up the comforts that come with being brought up in a middle-class family to devote herself to the homeless and the sick. She is pictured in an undated photo. (CNS photo/Archdiocese of Sao Salvador da Bahia)

By Lise Alves – The canonisation of the first Brazilian-born female saint is making headlines across the country, putting news coverage of the country’s current political and economic difficulties on the backburner.

The canonisation has even delayed approval of the government’s most important Congressional bill, the social security reform. Brazil’s Senate has delayed the final vote until Oct. 22, because many senators are chartering a flight to Rome for the ceremony.

Blessed Maria Rita Lopes Pontes, known to Catholics around Brazil as Sister Dulce, will be canonised by Pope Francis at the Vatican. The canonisation is expected to be transmitted live on TV to the entire country.

Many in her hometown are flocking to stores, looking to purchase religious souvenirs connected to Sister Dulce.

Brazilian writer Paulo Coelho disclosed, through social networks, that he donated more than $244,000 to Sister Dulce Social Works. In a recent interview, Coelho said he regularly helps the entity named for a nun, who was there in his hour of need.

“I was begging in Bahia, I had run away from home, and she fed me,” he said.

Born in 1914 in the northeastern state of Bahia, Sister Dulce is revered for having given up the comforts that come with being brought up in a middle-class family to devote herself to the homeless and the sick. She was a member of the Missionary Sisters of the Immaculate Conception.

She founded the first Catholic workers’ organisation in the state of Bahia, but she is best known for her work with the sick and disabled.

Catholics said it was common to see Sister Dulce in Bahia’s capital, Salvador, dressed in her blue and white habit, with her hand outstretched, asking for “help for my poor.” With donations, the religious opened a hospital, an orphanage and care centres for the elderly and disabled.

One of the most popular religious figures in Brazil, she is still seen today by many as “the mother of the poor.”

In 1988, she was nominated for the Nobel Peace Prize. St. John Paul II, who called her work “an example for humanity,” met her in 1980 during his first trip to Brazil and, returning in 1991, he visited her in the hospital.

She died in 1992 at the age of 77, with tens of thousands attending her funeral and even more gathering for her beatification in 2011.

Sister Dulce will be the second Brazilian religious to be canonized. The first Brazilian-born saint to be canonized was Friar Galvao in May 2007, by then-Pope Benedict XVI.