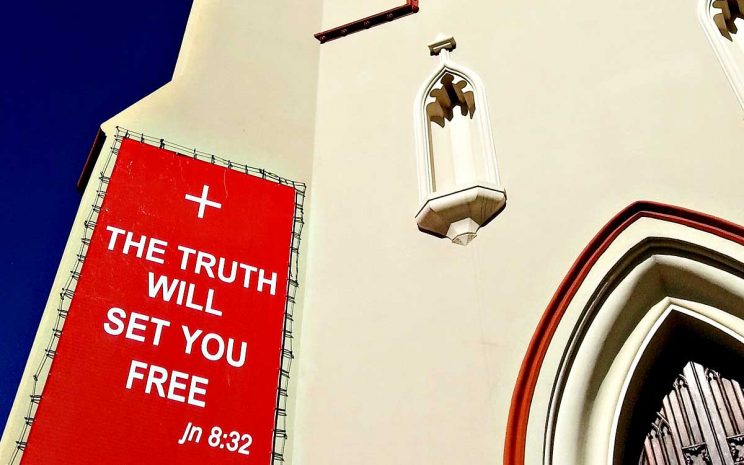 Daluxolo Moloantoa, Cape Town – For a long time, the biblical quote “The truth will set you free” was emblazoned on a banner hanging outside St Mary’s cathedral in Cape Town while the South African parliament—located directly opposite—was debating the Secrecy Bill in 2013.

The Bill’s aim was to regulate the classification of state information, a proposition vehemently opposed by many quarters in South African society, including the Catholic Church.

I was reminded of this significant time in post-apartheid history as I watched and came to terms with yet another day of damning evidence of state capture at the Zondo Commission in Johannesburg.

I am equally reminded that the reason why there is a state capture commission today is because priests of the Dominican Order, led by SACBC Justice & Peace head Fr Stanislaus Muyebe, took it upon themselves to approach the then-public protector Thuli Madonsela to lay the first formal complaint and request for investigation of state capture within state institutions.

The SACBC has made something of an improvement in publicising its positions regarding society, and the media, regarding platforms across the board, is a powerful tool.

The banner outside St Mary’s cathedral served as an effective platform in communicating the Church’s position on the Secrecy Bill directly to MPs and lawmakers. Anyone walking out of parliament’s doors would find it hard to miss.

I believe the space should be used as a permanent soapbox by the cathedral on behalf of the Catholic voice nationally. It would be a novel way of communicating the South African Church’s stand on issues of the day, in keeping with its tradition of social justice.

I trust the powers that be at St Mary’s cathedral will take heed of this proposition, and the public representatives of South Africa will then learn of the Catholic Church’s standpoint.