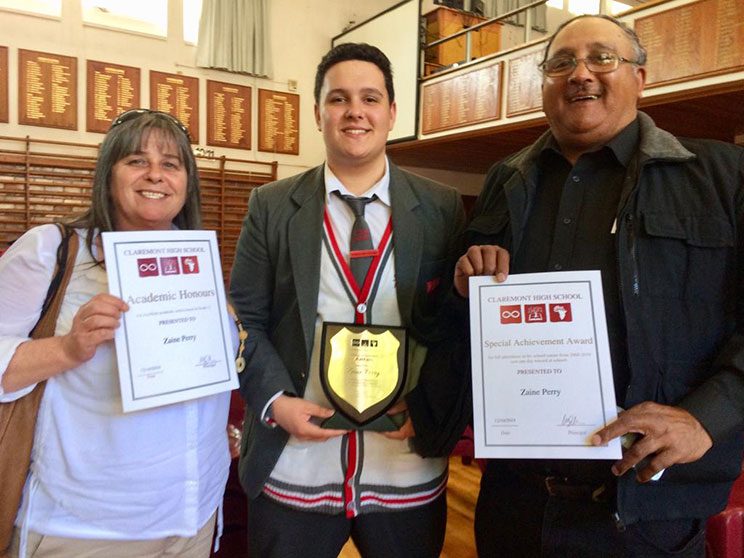 Zaine Perry has received a special achievement award for not missing a day of school in 14 years, an achievement his mother Michelle Perry, Southern Cross subscriptions administrator, says is due to his hard work and dedication.

Zaine, who is an altar server, a trainee catechist, a member of the St Vincent de Paul Society and a proclaimer of the Word, said he only realised at the beginning of Grade 7, when his teachers, principal and fellow learners started making a fuss about his full attendance,  that this must be some kind of record.

In Grade 8, he was disappointed not to receive an award at prizegiving and felt it unfair on his parents to have to watch all the other learners get awards. That was when he decided to use his daily attendance to work harder and adopt the motto “I can and I will.”

“This definitely motivated me because when I thought about it, I had already completed seven years of full attendance and there were only five years left to go; I was more than halfway and thought this would be a great challenge,” Zaine said.

His parents, Michelle Perry and Dino Issacs, said they could not be more proud of him, he has exceeded their expectations, and deserves every excellent mark he gets.

“His humility and compassion for others and animals amaze us. Our hopes for him are that he succeeds in anything he sets out to do. We pray that life lessons along the way will not be too overwhelming and that he will bounce back with positivity from all of them.”

“Zaine’s diligence and work ethic are exemplary and very much reflected in his dedication to attending every single day of school,” said Claremont High academics department head Alexander Wilson.

St Mary’s Primary School principal Fiona Sellar also spoke of Zaine’s dedication, perseverance and hard work throughout his time at St Mary’s, and said she was proud to hear that he continued in this manner through his high school career.

Fr Rohan Smuts, who has known Zaine in his personal capacity as dean at the metropolitan cathedral church of Our Lady of the Flight into Egypt for the past seven years, said he sees Zaine as a remarkable, sensitive, generous young man, with concern for others.

Fr Smuts also noted that Zaine is a committed Christian, and unapologetically so, rare in someone so young in today’s world.

Once Zaine has completed matric he plans to continue studying. He has applied to study medicine at UCT, which would be his dream. He  has conditional acceptance to do a bachelor of science degree in marine biology/biochemistry at UCT and also a BSc in physics/laser physics at Stellenbosch University.

“I feel dedication is key to anything we do in life. I believe I have dedication and commitment and, hopefully, this will stand me in good stead for my future,” Zaine said.