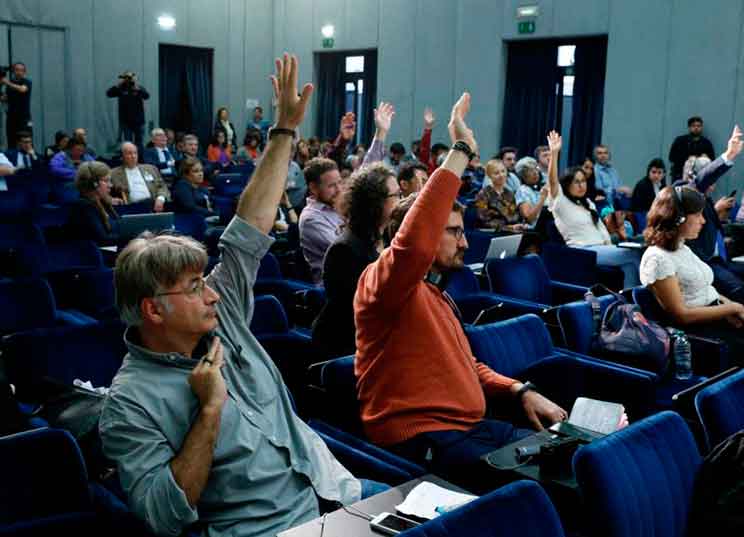 Reporters raise their hands to ask questions during a news conference after a session of the Synod of Bishops for the Amazon at the Vatican. (CNS photo/Paul Haring)

By Barbara Fraser – Solutions to environmental problems discussed at the Synod of Bishops for the Amazon must involve not just Amazonian nations, but countries in Europe and North America, bishops said.

“This is a special synod, but it has universal consequences,” Bishop Karel Choennie of Paramaribo, Suriname said.

Many of the environmental issues that synod participants have raised – including destruction of forests, pollution of rivers, rapacious mining and especially climate change – are also common to other tropical regions of the world.

Those problems have roots in North America and Europe, although they often are exacerbated by policy loopholes and lack of enforcement in Amazonian countries, synod participants have said.

In their four-minute presentations during the first two weeks of the synod, participants described how mines, dams and other enterprises owned, built or operated by companies in industrialized countries displace local communities, affecting the environment and disrupting people’s lives.

Global trade means that even consumers’ decisions leave a footprint in distant countries. For example, most of the deforestation in Brazil is for cattle ranching to export beef. Destruction and fires in Bolivia’s lowland dry forest increased after the country signed an agreement that is expected double beef exports to China.

And demand for gold keeps prices high, encouraging illegal miners to invade indigenous people’s territories in remote parts of the Amazon. Their unregulated operations leave a scene that resembles a cratered moonscape, where rivers are poisoned with mercury and cyanide.

“No one can say, ‘I’m not responsible, it’s not my fault,'” Bishop Choennie said. “We are all responsible.”

But that is a message people in industrialised countries do not always want to hear, Bishop Emmanuel Lafont of Cayenne, French Guiana, told Catholic News Service.

When he returns to France for visits, he said, he often finds it difficult to interest other people, even in the church, in problems facing indigenous people in his diocese.

“They know very little” about French Guiana, Bishop Lafont said. “They live a very comfortable life compared to the Third World, and they are not aware – they are afraid of becoming aware – that their wealth has been made from the colonising process.”

Except for French Guiana, the Amazonian nations won independence from the countries that colonized them, but economically they continue to depend heavily on revenues from raw materials such as minerals, oil and timber, or on industrial-scale farming and ranching.

The economic and social costs are borne by indigenous villagers and small farmers in the Amazon, said Josianne Gauthier, executive secretary of CIDSE, an international consortium of Catholic development agencies and an invited guest at the synod.

“It’s colonialism – you externalise the costs to another population that you consider inferior or of less value,” she said. “It’s a one-directional relationship, where you exploit and live well, while the others suffer the consequences.”

People in places like North America and Europe do not always see that “environmental degradation and human rights violations (in the Amazon) are connected to our behaviours or policies or trade agreements” elsewhere in the world, she said.

That is because “they’re afraid of listening from the point of view of the other,” Bishop Lafont said.

In South Africa, where he served as a missionary for 13 years, “there is a proverb that says when lions (tell) the stories, the history of the hunt will be different,” he said.

People begin to understand the impact of their consumer choices and the policies of their countries when they come face to face with the people who are affected, he said.

Synod participants who have never seen the Amazon have told Bishop Lafont that they would like to visit his diocese. Gauthier’s organization takes people from countries like those in the Amazon to talk with policymakers in places like Europe and North America.

Ultimately, however, the Gospel, Pope Francis’ encyclical “Laudato Si'” and the synod all are calling for a profound conversion, synod participants said.

“Europe wants the Amazonian people to keep their forest (standing), but they don’t want to change their lifestyle. That’s a big contradiction,” Bishop Choennie said.

“This economy kills,” he added. “This economy is unjust for the next generation,” which will inherit the consequences of global warming and other environmental problems.

The call to an ecological conversion will reverberate after the synod officially ends Oct. 27, participants said.

“It can’t stop here,” Gauthier said. “We have to take it into our territories. There has to be solidarity for what’s going on in the Amazon, and the messages have to change.”

Bishop Lafont said Catholics “have to take ‘Laudato Si’ more seriously. We have to promote a change in the way of living. Concretely. That will be my message.”