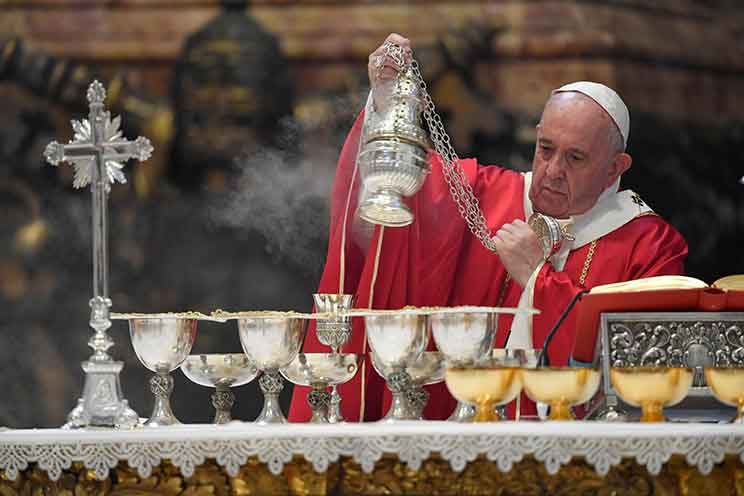 Pope Francis celebrates Mass in memory of cardinals and bishops who died in the past year. The Mass was in St. Peter’s Basilica at the Vatican. (CNS photo/Vatican Media)

By Carol Glatz – Jesus invites everyone to always go to him, which, Pope Francis said, also means no longer making life revolve around oneself.

“What direction is my journey going? Do I only try to make a good impression, to protect my position, my time and my space or do I go to the Lord?” he asked during a memorial Mass for the 13 cardinals and 147 bishops who died over the preceding year.

Celebrating Mass in St. Peter’s Basilica, the pope reflected in his homily on God’s will that everyone who believes in him may have eternal life and be raised on their last day.

In the day’s Gospel reading, Jesus says, “I will not reject anyone who comes to me.”

Jesus extends this invitation – “Come to me,” so people may be “inoculated against death, against the fear that everything ends,” the pope said.

Going to Jesus means living each moment of the day in ways that put him at the centre – with one’s thoughts, one’s prayers and one’s actions, particularly by helping someone in need.

He said people must ask themselves, “Do I live going to the Lord or do I revolve around myself,” only being happy when things go well for oneself and complaining when they do not.

“You cannot belong to Jesus and revolve around yourself. Whoever belongs to Jesus lives going outward toward him,” he said.

“Today, while we pray for our brother cardinals and bishops who have left this life to go encounter the Risen One, we cannot forget the most important and difficult way out, which gives meaning to all the others, is (going out) of ourselves,” he said.

The bridge between life on earth and eternal life in heaven, he said, is to show compassion and “to kneel before those in need to serve them.”

“It is not (having) a bleeding heart, it is not cheap charity; these are questions of life, matters of resurrection,” he said.

It would do people well, he added, to think about what the Lord will see in them on judgement day.

People can find guidance when making an important decision in life by seeing things from the Lord’s perspective – what fruits resulted from which seeds or choices made today.

“Among the many voices of the world that make us lose the meaning of existence, let us tune in to the will of Jesus, resurrected and alive.”