The Tensions of Art 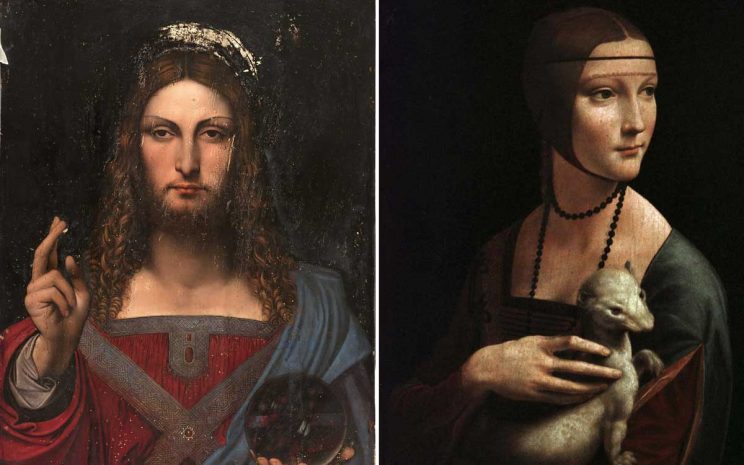 Some of the most famous paintings ever made: Savator Mundi and The Lady with the Ermine by Leonardo da Vinci

The blistering outrage over a school art project that was considered by some to be blasphemous holds lessons for all involved, including those who registered their anger on social media.

To be sure, the artworks by a matric pupil of Grantleigh College in KwaZulu-Natal are not in good taste. They replace Jesus at the Last Supper with the clown mascot of a global fast food chain and depict Christ with horns. The learner also used pages torn from a Bible to fashion his art.

At first glance, most Christians would be shocked by such imagery. But this is art, even if the artist is an amateur. Art requires context and interpretation, even and especially if we don’t like it.

The offending art was created as a matric project and exhibited by the school among other matrics’ art, as is customary in most high schools. It was not created by a professional artist for public exhibition.

The boy did not seek to make a public statement. This was art created specifically for grades.

The publicity the artworks received was generated by an angry father who filmed and posted it on social media. His commentary, describing the art as “demonic”, whipped up a mood of umbrage as his video went viral. Art may offend. If we strip artists of their freedom of expression (in as far as that freedom does not intrude on the human rights of others) whenever their art displeases us, then we undermine our own right of expression as people of faith.

Art may offend. If we strip artists of their freedom of expression (in as far as that freedom does not intrude on the human rights of others) whenever their art displeases us, then we undermine our own right of expression as people of faith.

Likewise, the adherents of any religion and none have a right to make known their objections to that what they feel is offensive. But that licence is accompanied by two caveats.

Firstly, the offence taken must be reasonable; secondly, a campaign of protest must be fair and take into account the rights of others. The lines between fair and unreasonable objection can be thin. When this is so, it is better to err on the side of charity. 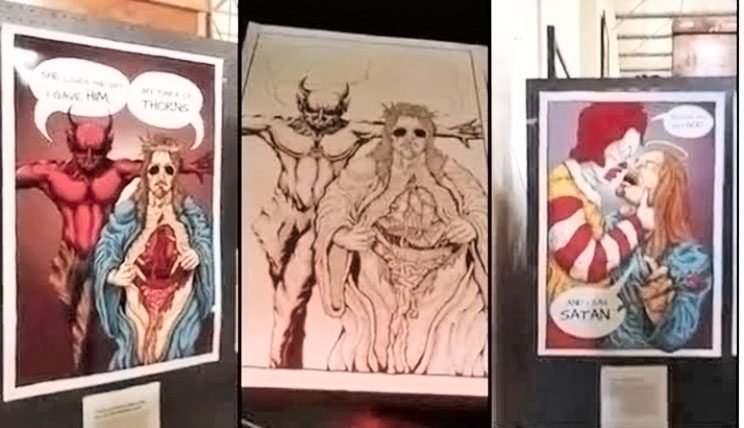 Matric project by a pupil of Grantleigh College in KwaZulu-Natal

It is wrong to allege blasphemy, never mind “satanism”, where no such transgression can be shown to be intended, or even to exist.

A necessary element in the commission of blasphemy is the intent to attack or mock God. The boy says his art targets hypocrites who invoke God but don’t live Christ.

In that view, which is consistent with a reasonable interpretation of his art, the artist doesn’t intend to deride or attack Christ; he depicts the distortion of Christ by those whom he sees as hypocrites.

We have every right to be disgusted and upset by the depictions. We are entitled to dislike the art. We are free to argue that the boy used the wrong medium and the wrong tone. We have a right to take offence. But we cannot call something blasphemous when, by definition, it isn’t. There are times when there are authentic attacks on the Church and all it holds sacred. These require steadfast objection which must be expressed with clarity and, when appropriate, with charity.

There are times when there are authentic attacks on the Church and all it holds sacred. These require steadfast objection which must be expressed with clarity and, when appropriate, with charity.

Such charity was not always evident in reaction to the school project.

The actions of Pastor Andrew Anderson, the man who filmed the images and disseminated them on social media, are more troubling than any clumsy teenage art.

Where is the charity in public-shaming and gang-bullying a teenage boy over an artwork? Where is the justice in not even giving the boy the right to explain himself in the video before labelling his art “demonic”? Where is the concern for the psychological welfare of a kid who is preparing for his matric?

And what of the fury of those whose protest exceeded the limits of reasonable commentary?

Have we lost our sense of empathy? If that boy was our son or grandson or nephew or brother, even if we abhorred his art, how would we feel about him being the target of such frenzied public loathing?

And we should reflect on this core question: Is Christ harmed more by the adolescent art of a teenage boy, or by the merciless animosity that has been directed at him?