Bishop Sipuka On His Life, His Diocese and South Africa 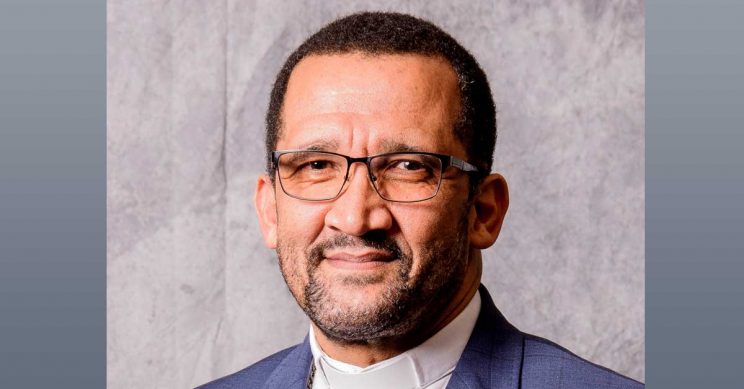 Bishop Sithembele Sipuka of Mthatha, president of the Southern African Catholic Bishops’ Conference. Before he entered the seminary, he worked as a post office clerk, as he told The Southern Cross. (Photo: ER Lombard)

Earlier this year Bishop Sithembele Sipuka of Mthatha assumed the presidency of the SACBC. In a two-part interview he told Mandla Zibi about his life, ministry and vision.

At the bishop’s plenary session in February this year, Bishop Sithembele Sipuka took over the presidency of the Southern African Catholic Bishops’ Conference, succeeding Archbishop Stephen Brislin of Cape Town.

Sithembele Anton Sipuka was born on April 27, 1960, at Idutywa in the Eastern Cape — also the birthplace of ex-President Thabo Mbeki — about 35km from Gcuwa (the former Butterworth).

He was ordained to the priesthood for the diocese of Queenstown on December 17, 1988.

The former rector of St John Vianney Seminary was appointed bishop of Mthatha on February 8, 2008, to succeed Bishop Oswald Hirmer, and was ordained to the episcopate on May 3 that year.

You were born in Idutywa in the Eastern Cape. Please describe your journey as someone from the former Transkei homeland, up to where you are now, as president of the SACBC.

I was indeed born in Idutywa. Not being keen on working in the mines would have forced my father to leave the family behind, so he went around with us looking for work.

That is how at one time we were in Mthatha, where he was working on the farms.

Incidentally, it was in Mthatha that I became a Catholic.

When Transkei was gearing up for independence in the early 1970s, factories were opened in Butterworth, and we came to Butterworth where my father worked and lived with us until he passed away in 1994.

But you soon reconnected with your hometown…

Yes, because after matric I got a job as a post office clerk in Idutywa where I worked for two years before joining the seminary to train as a priest for the diocese of Queenstown.

I completed my priestly training in 1988 and was ordained to the priesthood in the same year.

I worked as a curate in Qoqodala for two years, and at the end of 1991 as a parish priest in Zigudu.

In June 1992 I was sent to Rome for further studies and returned in 1994 licentiato (licensed), as the Italians would say, in dogmatic theology.

I was asked to teach at St Peter’s Seminary until the end of 1999 when I took a break to complete a doctoral degree with UNISA.

In August 2000 I was appointed rector at St John Vianney Seminary and began working as rector in January 2001. And in 2008 I was sent to Mthatha as bishop, where I had become a Catholic.

That is the journey from the former Transkei homeland, up to where I am now.

As president of the SACBC, what do you hope to bring to the Catholic community in the region?

I hope to facilitate a more committed clergy, religious and laity to the ownership of the Church and its mission.

Having grown up under missionaries, and with great admiration for their dedication in establishing and growing the Church, I would like to see us growing more and more in that sense of ownership.

Situations have changed from missionary days, and so some of the priorities have also changed. Today our task is to improve the quality of Catholics in terms of faith formation and witnessing for that faith.

The Second Vatican Council’s description of the Church as the “Joy and Hope” of the world — something that Pope Francis has taken up as a guide in his papacy — is what I hope we shall be more and more of.

I hope that from the treasure of our faith and tradition as Catholics — without losing this identity — and guided by the value of human dignity, we will make our contribution to the solution of many challenges that face us today.

What do you think are the priorities and challenges facing us, as a nation?

Since 1994, a lot has changed for the better, but there remain some challenges.

The most glaring challenges are poverty, unemployment and a dysfunctional government that fails to render essential services.

Health provision institutions are not functioning well; the quality of education and provision of education infrastructure still leave much to be desired; roads in rural areas are either non-existent or not maintained; dirt and lawlessness characterise our cities, and so on. All this leads to misery in the lives of the poor.

Most worrying is the lack of commitment from the powers that be, government and business, to deal with this problem. The ordinary people also, except for being destructively violent and venting their anger on people of foreign origin, appear to be paralysed and do not use their power to change the situation.

The time has come for civil society to reclaim its power by calling those in authority to accountability—and if they continue to fail, by voting them out of power.

The Church needs to play a critical part in engaging civil servants in government and remind them of their call to serve instead of behaving like feudal lords who do what they like with impunity.

Yet, as we try to improve the material wellbeing of all South Africans, we must also stay awake to the danger of materialism and individualism.

Providing people with material wellbeing will not fulfil them. Regardless of how much you try to provide for people materially, if they hold no superior values than eating, drinking and entertaining themselves, they remain doomed as people.

Material prosperity without the value of caring relationship is only temporal and caters only for a few.

We see well the example of this in North America and Europe. While they have everything, there is starvation of human relationships, relationship with God and with nature.

To be human means more than eating, drinking and being physically comfortable. At the end of the day it is not eating that defines us, but respectful and caring relationship with each other.

To paraphrase the oft-quoted African maxim, “Umntu ngumntu ngabantu”: One is, not because one eats, but one is, because one is in a relationship, and this belonging extends beyond the nuclear family to include God, the whole human family and creation.

What other challenges do we face?

One other big challenge is the problem of a sexualised society resulting in uncommitted and irresponsible sexual behaviour, which has led to much human suffering.

The right use of sexuality is something that is less spoken about these days, even in the Church, and yet the consequences of the lack thereof are there for all of us to see.

Indications are that HIV has again begun to spread. More than 70% of children being born are born to single women, most of them young teenagers.

The willy-nilly killing of the unborn — euphemistically called termination of pregnancy—is apparently at an alarming rate.

In cases where abortion is not willy-nilly but a dilemma—as in cases of teenage pregnancy, incest and rape—we need to find alternative ways of dealing with such situations instead of leaving them to a law that allows abortion.

We need proper formation about sexuality and more humane and Christian means of handling consequences of “unwanted pregnancies” than abortion on demand.

That abortion is a law does not make it right. Furthermore, it renders commitment to justice hypocrisy, when a huge number, in the form of unborn children, are excluded.

Besides, if you have ever counselled a mother who “ended” her pregnancy, you will realise that abortion leads to two deaths: the physical death of the child and spiritual death of the mother.

Tell us a bit about your own diocese of Mthatha. What are its own peculiar characteristics, attractions and challenges?

Our diocese is a small and a rural one, with only 2% of the estimated two million citizens being Catholic.

The majority of Catholics in our diocese are Sotho-speaking, and so are most of our local priests.

The Xhosa-speaking are few. Part of the explanation for that is that the southern part of the diocese was first evangelised by the Methodist Church.

English-speaking Catholics and those of foreign origin are even fewer.

The strength of the diocese lies exactly in being small. We are a community that is close to each other. We meet often, we collaborate easily, there is a great sense of family, and as bishop I get to visit the parishes very often.

Another source of joy is the growing sense of ownership of the Church, especially with regard to financial support of the Church.

Recently we completed the first part of our pastoral centre in Maclear, which is in the middle of the diocese, making it easy for both sides of the diocese to gather for diocesan events and retreats.

In national collections like Lenten Appeal we pitch in very well, considering the economic conditions of our region and levels of our numbers.

The major annual fundraising, called “the harvest”, meant for the education of seminarians and on-going formation of priests, yields growing results in each successive year.

One happy consequence of Transkei’s independence was the establishment of the university, which attracts Catholic academics of note who make valuable contribution to the diocese with their skills and resources.

Still on education, our diocese has eight schools in addition to two which are owned by the religious. Three of these are high schools that continue to provide the best matric results in the Eastern Cape.

One other note of joy is the commitment of people to ministry. Some years ago we stopped the practice of paid catechists, and now have what we call “sowers”, who are voluntary Christians teaching catechism, trained and supported by our diocesan animation team.

We are not without challenges. The major one is the shortage of priests. Presently 55% of our priests are Fidei Donum, meaning from outside. We are not growing in numbers, at least not as much as we would like to, particularly in the southern part of the diocese.

We lack the presence of the religious; all convents but one have closed down.

In this context of unemployment and poverty, we do our best to encourage development projects, but these too are taking up slowly—because of the bad roads.

Vehicles are a big cost, both in buying and maintaining them, since we have to buy big cars with high clearance.

Part two of the interview will run next week.