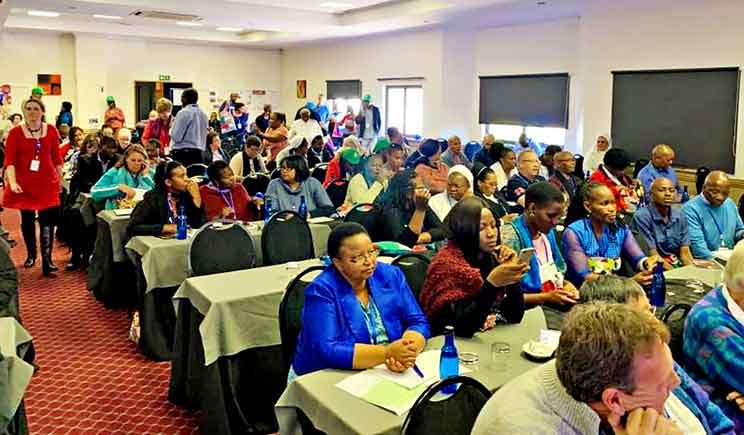 The Catholic Board of Education’s national congress met to chart the way forward for Catholic schools. (Photo: Sheldon Reddiar)

International assessments suggest 78% of South African children in Grade 4 cannot read for meaning in any language. This inability to read for meaning has dire implications for learning, deputy director of the Catholic Institute of Education Anne Baker said.

“Our children are unable to progress, not only in school but in life. Lack of learning also leads to half of the students dropping out in high school. For mathematics, international student assessments suggest some gains, but results are still weak,” Ms Baker said.

She raised the problem at the third national congress of the Catholic Board of Education (CBE), on the theme “Towards Tomorrow, Together in Faith”. The congress, attended by 350 delegates, aimed to develop a new compelling vision for Catholic schools.

This followed a year of regional conferences including school leaders, religious educators, teachers, parents, governors and owners of Catholic schools, bishops, and leaders of religious congregations.

Sizwe Nxasana, a past pupil of St Francis College, Mariannhill, was one of the keynote speakers at the national conference. He is the co-founder and chair of the National Education Collaboration Trust and founder of the Sifiso Learning Group.

Mr Nxasana spoke of the urgency and importance of renewing and changing an education system that is failing the young. He said Africa needs a revolution to be able to meet 21st century needs with a curriculum that must focus not only on knowledge and skills but also on character in a holistic way.

Dr Wayne Tinsey, executive director of Edmund Rice Education in Australia, said Catholic schools should respond to today’s social challenges by being prophetic and signs of hope in the world.

Nontobeko Matlala, John McCormick and Ms Baker outlined the key aspects of child safeguarding, of the Building Peaceful Schools programme, and of Christian meditation in schools.

Since 2012 schools have held workshops on the Child Safeguarding Policy, with a revised version put into place in 2018. In 2012, it was apparent that teachers were struggling with discipline and the loss of corporal punishment. This led to the Building Peaceful Schools programme based on conflict management and restorative justice.

Ms Baker recommended the practice of Christian meditation as part of those processes.

“Owning, growing and sustaining Catholic schools was a key theme, especially given the challenging financial status of South Africa at present and the struggles some schools are facing,” Ms Baker said.

She noted that with ageing religious congregations and the competing needs of bishops, the need for planning for succession is important.

“There was a call for collaborative partnerships and the sharing of resources through the common structure of the CBE,” she said. “The need for strong advocacy with departments of education to obtain the quality education children deserve was another important aspect of this theme.” Sustainability in a depressed economy was also a major concern, Ms Baker added.

Once the final vision and direction statements have been sent to and approved by delegates, the CBE will in consultation with regions develop a new plan for South Africa to give life to these statements.

The Church and Family: Let Me Speak Boldly

Before I started writing this article I was reading the October 16 issue of The Southern Cross. A few things...