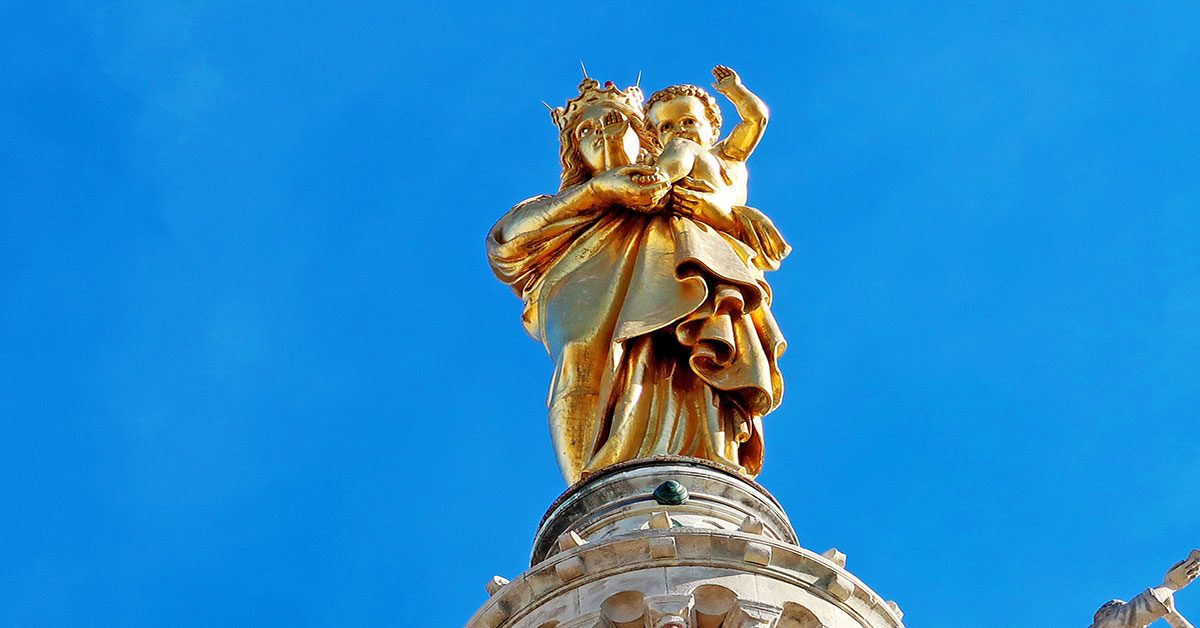 The Madonna watches over Marseilles atop the basilica of Notre Dame de Garde, the city’s highest point. (All photos: Günther Simmermacher)

In October a group of Southern Cross pilgrims travelled through Catholic France, and came up close and personal to the founder of the Oblates of Mary Immaculate, as Günther Simmermacher explains.

The group of Southern Cross pilgrims to Catholic France in October had the privilege of receiving the Eucharist at the tombs of several great saints, such as St Bernadette Soubirous, St Margaret-Mary Alacoque, St Catherine Labouré and St Louise de Marillac.

But it is probably the Mass at the tomb of St Eugène de Mazenod in Marseilles which everybody will remember most warmly.

We spent two days in southern France getting close to the founder of the Oblates of Mary Immaculate, or OMIs, who lived from 1782 to 1861.

Most Southern Africans don’t need to be told about the immense missionary work of the Oblates in our region, starting with Bl Joseph Gérard, whom St Eugène de Mazenod himself sent to South Africa.

South Africa’s greatest churchman, the late Archbishop Denis Hurley, was an Oblate, as were all of his predecessors in Durban. There have been many Oblate bishops, including four who are currently serving (Archbishops Buti Tlhagale of Johannesburg and Jabulani Nxumalo of Bloemfontein; Bishops Edward Risi of Keimoes-Upington and Sylvester David, auxiliary in Cape Town).

Even the idea for The Southern Cross was co-hatched by an Oblate priest, Fr Leo Sormany of Durban, together with Fr James Kelly, a diocesan priest from Cape Town.

In short, the Oblates have done much to grow and shape the Catholic Church in our region. So it was appropriate that a group of pilgrims from across the country should visit St Eugène de Mazenod during the Extraordinary Mission Month.

And it was entirely fitting that we should be guided in southern France by a South African Oblate priest, Fr Bonga Majola, who is based in Aix-en-Provence, the city where St Eugène was born and founded the OMIs.

Fr Bonga was born in Nkandla, in rural KwaZulu-Natal — the very area which Bl Joseph Gérard found so difficult to evangelise. When he was posted to Aix not long after his ordination, Fr Bonga obediently but reluctantly moved from assisting at St Charles church in Victory Park, Johannesburg, to France.

Since then he has become fluent in French and used to the ways of the Provence, though he also yearns for home. So Fr Bonga was very glad to guide our group, as he had guided a group from Eldorado Park in Johannesburg led by his confrere Fr Paul Beukes a month earlier.

The priesthood’s gain was tour guiding’s loss: Fr Bonga was a superb guide. Of course, his love for the founder of his order was evident as he recounted for us the life of St Eugène de Mazenod. 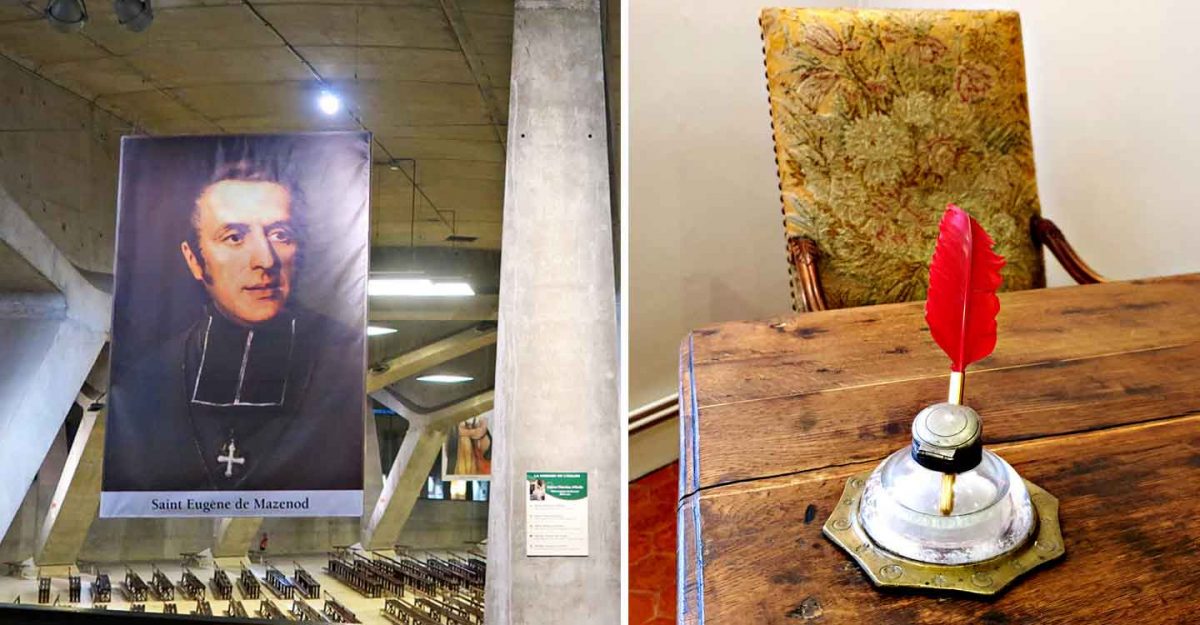 An image of St Eugène de Mazenod is displayed in Lourdes’ St Pius X basilica • The chair, table and quill of St Eugène in his study in Aix-en-Provence

Born into a wealthy family in Aix-en-Provence, young Eugène was quite impressed with the social privilege he grew up in, even as the French Revolution forced his family into exile to what is now Italy. In Sicily he even adopted the affectation of styling himself a count.

After the family returned to France, for various reasons Eugène experienced a certain fall from the social and economic status to which he was accustomed.

At 25, on Good Friday, he had a religious conversion which would lead to his ordination in 1811.

After his ordination, Fr Eugène was granted his request to mission to those on the periphery of society, instead of running a parish.

He ministered to prisoners, the youth on the fringes, and the poor. But the mission work was exhausting him. So he gathered like-minded priests together and in 1816 founded the Missionaries of Provence, which a decade later would be renamed the Oblates of Mary Immaculate.

The room in a house in Aix-en-Provence in which St Eugène founded his congregation still exists. In it is the very table at which the OMIs were founded.

At the back of the room is a reliquary holding half of St Eugène’s heart. Behind it is a large map of the world, which suggests the scope of the Oblates’ missionary work but also symbolises the order’s wisdom that de Mazenod’s heart was “as big as the world”.

Our group had the unexpected privilege of having Mass around that table, in the presence of St Eugène’s heart, receiving the Eucharist from the saint’s own paten and chalice.

Fr Lawrence Mduduzi Ndlovu — our spiritual director who grew up in an Oblate-run parish and might have become an OMI himself had God not directed him to the diocesan priesthood in Johannesburg — asked Fr Bonga to lead the Mass. Aside from being a fine tour guide, the young priest is also a superb homilist.

The Oblates spread out

In 1841 St Eugène began to send his missionaries into the world. The first of them were sent to Canada, to minister to the Inuits.

The OMIs were always ready to take on difficult missions, and missions to places like Southern Africa, Algeria and Ceylon followed.

Today the OMIs are working in 67 countries.

By the time the Oblates began their worldwide missions, de Mazenod was already in bishop.

It must be said that St Eugène’s episcopal ordination in 1832 was an act of nepotism. His uncle, Fortuné-Charles de Mazenod, had been the bishop of the revived but troublesome diocese of Marseilles since 1823 and insisted that his trusted nephew be appointed to serve as what we would now call auxiliary bishop.

At his uncle’s retirement in 1837 (at the age of 88!), Eugène became bishop of Marseilles. The rough harbour metropolis — France’s oldest and second-biggest city — might have been only 32km from the more genteel Aix, but the two places might as well have been worlds apart.

As bishop, St Eugène was not popular with his priests and the powerful because his solidarity resided resolutely with the poor. Even today there are priests in the city who don’t remember St Eugène fondly.

But the people loved him. Some believe that St Eugène was the model for the kindly Bishop Myriel in Victor Hugo’s great novel Les Misérables. He wasn’t—that honour belongs to Bishop Bienvenu de Miollis of Digne, who also hailed from Aix-en-Provence — but he might well have been. 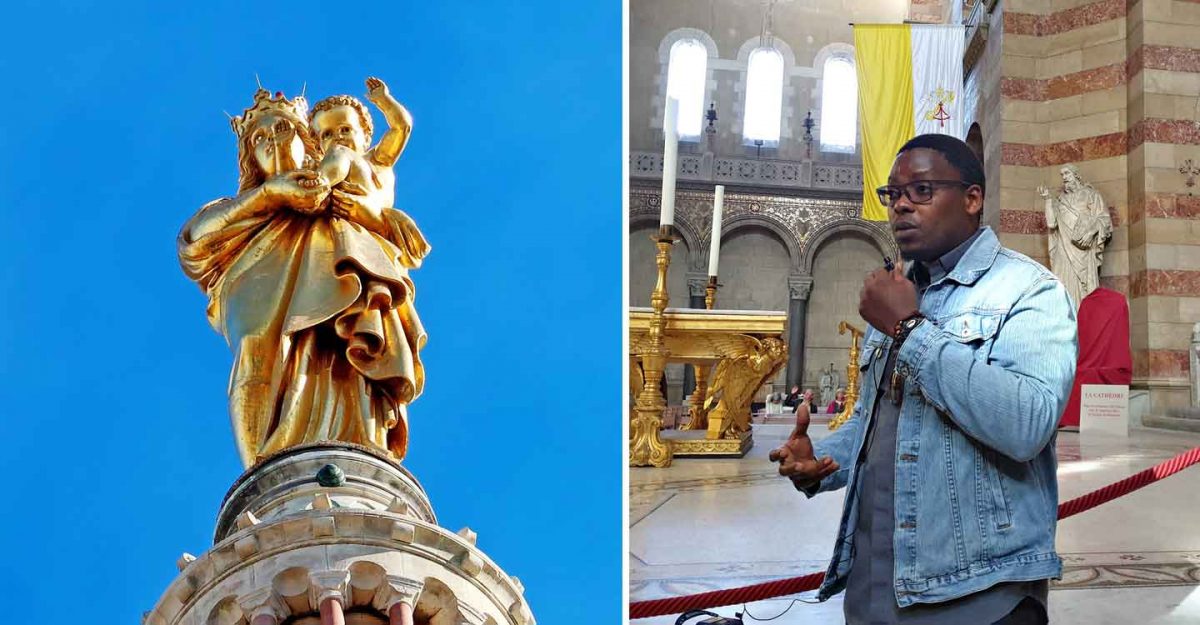 The Guard of Marseilles

St Eugène was also a builder of note. Most famously, he ordered the construction of the imposing basilica of Notre Dame de la Garde (Our Lady of the Guard) which presides on a hill over Marseilles. Built over 21 years starting in 1852, its bell tower is topped with a gold-gilded statue of the Madonna and Child.

Notre Dame de la Garde was and still is the spiritual centre of Marseilles, a city that is now 40% Muslim. In November 1887, St Thérèse of Lisieux visited it on her pilgrimage to Rome. Today, fans of the local football team, Olympique, come to pray before big games, and politicians before elections.

The walls are covered with votive plaques, placed in gratitude for the Blessed Virgin’s intercessions. From the brightly-mosaicked ceilings hang mobiles of ships and aircraft, placed by survivors of seafaring or aviation calamities.

At the entrance to the basilica is a sculpture of the pietà — an image of Mary cradling the body of her dead son. It gives a stark contrast to the gilded Madonna and Child that looks over the city.

It is at the monument of Our Lady holding the crucified Lord where the missionaries prayed before descending the hill towards the port, and then sailing off to foreign lands to spread the Good News. Most of them never returned home. 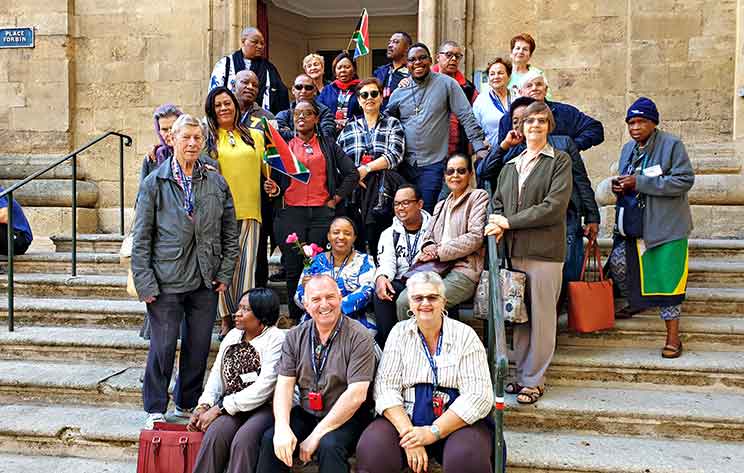 The Southern Cross pilgrims with Frs Lawrence Ndlovu and Bonga Majola OMI at the chapel of the Oblate centre in Aix-en-Provence, the city of St Eugène de Mazenod’s birth and founding of the Oblates.

St Eugène didn’t live to celebrate Mass in Notre Dame de la Garde. He also didn’t get to celebrate Mass in the cathedral he commissioned, the Cathédrale Sainte-Marie-Majeure (or Mary Major cathedral), which is commonly called just La Major. It was built from 1852-96 on the site of previous cathedrals going back to the fifth century.

Facing the port, it is a beautiful church — but it is used only once a year, at Pentecost, and for the installation of bishops.

For the most part, the cathedral is a site of tourism. “It’s like a museum,” Fr Bonga told us. That is the threat so many other churches in Europe are facing as well.

But it is also a site of pilgrimage for people like our group, for a chapel in the cathedral holds the tomb of St Eugène de Mazenod. He might not have celebrated Mass in the cathedral, but he rests beneath an altar — and we had Mass there.

Every pilgrimage has one or two Masses that just stand out from the others, that touch the spirit in its deepest recesses—and you just know that everybody else feels the same. This Eucharistic celebration, at the tomb of St Eugène, was such a Mass.

Our singing attracted tourists to spectate (not for the last time), and Fr Lawrence preached an inspiring homily (not for the first or last time). The lectors at the Mass were representatives of archdioceses with a long presence of the Oblates.

For the bidding prayers, Fr Bonga handed each member of the group candles bearing the image of St Eugène. These were then placed with our silent intentions on the altar, above St Eugène’s tomb.

At the end of the Mass, Fr Bonga raised his Oblate cross. In his congregation, it is a custom that new priests receive the cross owned by a deceased predecessor to signify that the mission continues.

Fr Bonga’s cross used to belong to Fr Allard Mmako, an Oblate who was murdered in 2009 at the age of 42 by hijackers in Nelspruit. He had been an influence on both Fr Bonga and Fr Lawrence.

At the end of the Mass, Fr Lawrence blessed the group with the cross of the slain Oblate, a blessing which interweaved St Eugène, the worldwide mission he founded, and the South African Church.

Last week: God Speaks to Us in Airports

Next week: A visit to Lourdes