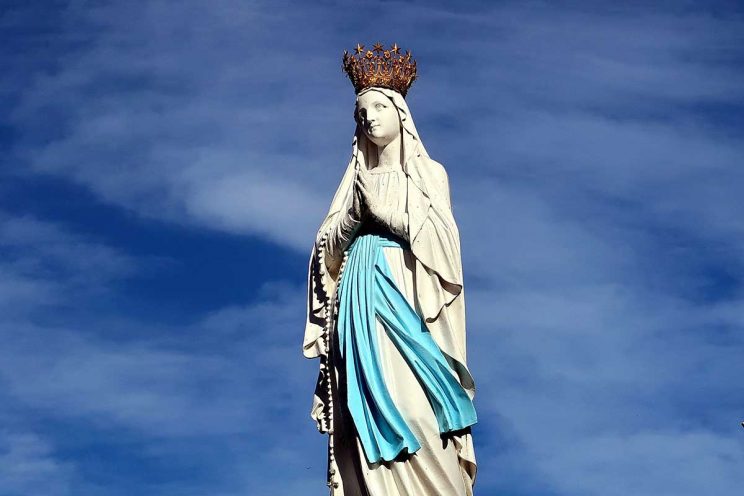 Our Lady in surprisingly good weather in Lourdes. (All photos: Günther Simmermacher)

In October a group of Southern Cross pilgrims had a grace-filled journey through Catholic France — bookended by plane and train travails, GÜNTHER SIMMERMACHER writes.

Bursts of lightning flashed through the Italian night sky, and above the drone of the aircraft engines we could hear the occasional crash of thunder.

Our group of Southern Cross pilgrims (and the other passengers) were circling over Rome in bad weather as the pilot awaited clearance to land at Fiumicino airport. Eventually he took the plane for refuelling to Naples.

We were worried, however, about missing our flight home to South Africa. And, it turned out, we had good reason to.

That flight left without us, setting in motion a long day of frustration, confusion, boredom and exhaustion. These are the hazards of air travel, though it was the first time such a thing had happened to me in my 19 years of leading pilgrimages. 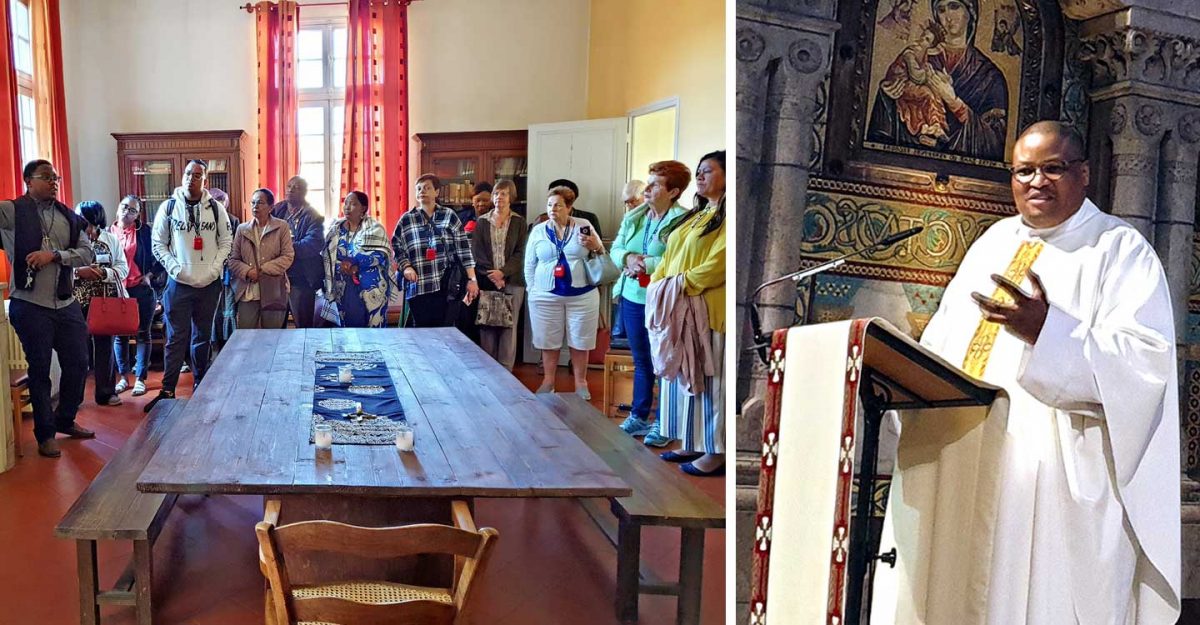 Left: France-based South African Fr Bonga Majola OMI with the pilgrims in the room in Aix-en-Provence where St Eugène de Mazenod founded the Oblates of Mary Immaculate in 1812. Right: Fr Lawrence Mduduzi Ndlovu celebrates Mass in the Sacré-Coeur basilica in Paris, which resounded with the singing of the South African group.

But matters were aggravated by the incompetence and — it must be said — duplicity of some staff of the major Italian airline we were travelling on (and the absurd requirement of transit visas imposed on South Africans by its former colonist, Britain, which prevented a timely rerouting).

In all situations, especially those that test us, it is a good exercise to discern what God is trying to tell us at that moment. Being in an airport arguing with disdainful airline staff might not be the most propitious time to engage in such spiritual exercises. But what was God saying to us?

Perhaps God’s question to us pilgrims was this: “Will you let the troubles of the mundane darken the illumination of your pilgrimage?” Indeed, God is challenging us all in our daily lives with that kind of question.

The feedback from the pilgrims is that neither the ineptness of Alitalia nor the bad weather which set in motion the chain of aggravations would diminish the graces and memories of a beautiful pilgrimage.

A community is built

The pilgrimage was bookended by unusual Roman thunderstorms. On our way to France, bad weather delayed the group’s flight to Paris, causing us to miss our train to Lourdes. Literally, by one minute!

Smooth organisation — involving phone calls between Paris, Cape Town and Rome — ensured that we caught the next train, but the delay was a test of our patience.

We passed that test. Indeed, it built a community among pilgrims, with strangers from all over South Africa quickly striking up friendships, many of which will last long past the pilgrimage.

At our first Mass in the St Anne’s chapel of Lourdes’ basilica of the Immaculate Conception, our spiritual director placed the previous day’s travails in a proper context.

In his penetrating homily, Fr Lawrence Mduduzi Ndlovu of Johannesburg reminded the group that before the advent of easy mass transportation, pilgrims would endure many hardships to make their spiritual journeys.

This would not detract from the fruits of their pilgrimage, for they knew that the journey to God invariably requires sacrifice — more than that, their cross animated the experience.

Fr Ndlovu didn’t yet know the sacrifices we would still encounter in Rome, but his point stands. And this insight, too, applies to us in daily life: Do not let the hardships of this life blind us to God.

The saint for rain

Bad weather interfered with our transit to and from France, but during our journey, we were under the protection of St Scholastica, the patron for rain-related matters.

All forecasts to the contrary, we experienced no rain, or even cold weather. When it did rain, we were safe from the elements in the bus.

In France in autumn, this is quite remarkable. Take the weather in Lourdes: the day before our arrival it rained. While were in Lourdes, the sun was shining. As we left Lourdes, it was raining again.

The good weather we had throughout was one of many graces on this pilgrimage which had as its focus three main themes.

Firstly, there was Our Lady, particularly through our time in Lourdes and our Mass in the Miraculous Medal chapel at rue de Bac in Paris. Of course, Our Lady is ever-present in France, where she is known as Notre Dame.

Secondly, we turned our focus on the Sacred Heart of Jesus. 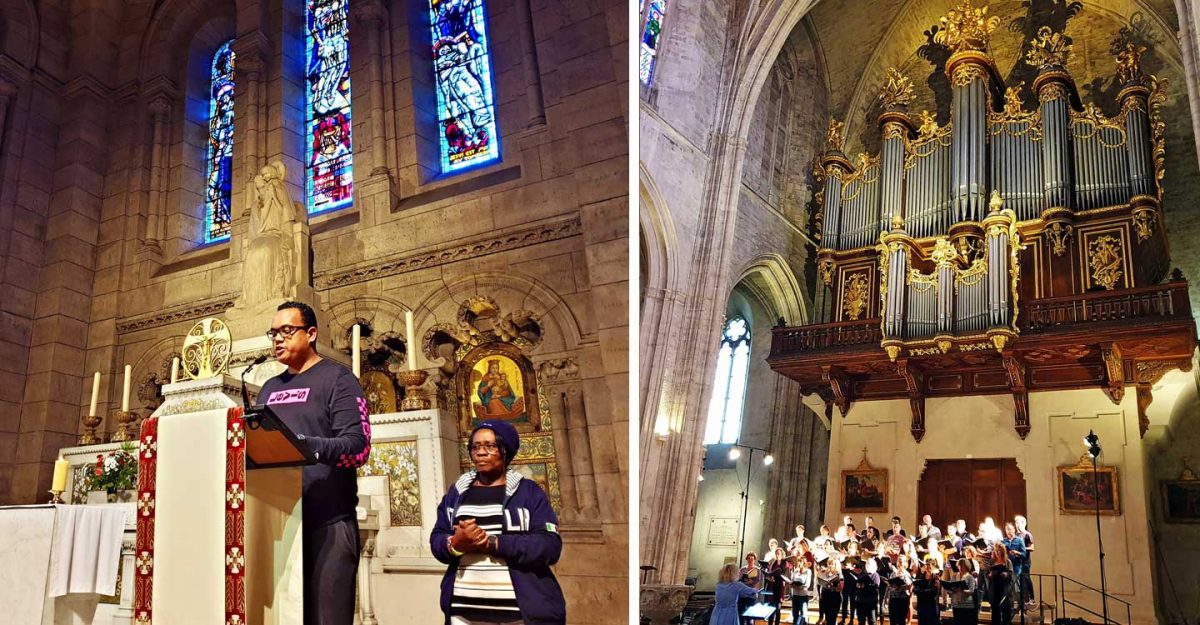 Left: Dr Shane Rosenberg of Pretoria reads at Mass in Paris’ Sacré-Cœur basilica as fellow reader Patricia Manyeli of Bloemfontein looks on. Right: A choir rehearses for a concert of sacred music in St Pierre cathedral in Montpellier just as the Southern Cross pilgrims arrive for Mass there.

In Paray-le-Monial we had Mass in the chapel where Jesus revealed his Sacred Heart to Sr Margaret-Mary Alacoque (the chapel now also holds her tomb).

And in Paris, we had Mass in Sacré-Cœur (or Sacred Heart) basilica, which echoed with the passionate singing of our group, attracting even secular tourists in the famous church to spectate.

Those Masses were special to Fr Ndlovu, who serves as the spiritual director to the Sacred Heart sodality in the archdiocese of Johannesburg.

Fr Ndlovu was also touched by the third focus of the pilgrimage: St Eugène de Mazenod, founder of the Oblates of Mary Immaculate (OMI), whom we encountered in his hometown of Aix-en-Provence and in nearby Marseilles, where he served as bishop.

Having grown up in an Oblate parish in Soweto, Fr Ndlovu had once intended to become a priest of the order, which did so much to evangelise huge parts of Southern Africa. God called Fr Ndlovu to the diocesan priesthood, but his affection for the OMIs remains strong.

In those places we were guided by a South African Oblate priest who is based in Aix-en-Provence, Fr Bonga Majola.

How wonderful it was to see items once owned by St Eugène; more so to have Mass in the room and at the table where he founded the OMIs in 1816, using the saint’s own paten and chalice. A day earlier, we’d had Mass at his tomb in Marseilles.

There were many other unexpected graces. For example, as we entered Montpellier’s magnificent 16th-century St Pierre cathedral for our Mass, a choir backed by the cathedral’s grand organ began rehearsals for a concert of sacred music to be held later that evening.

Those are the graces which one can capture on photos and videos. But a pilgrimage has so many intangible graces: the moments of spiritual illumination, the joy of a faith shared so intensely with others, the love that develops between people who just days before were strangers to one another…

The latter became evident on our penultimate day. As we were visiting Montmartre and the Sacré-Cœur basilica in Paris, one of our couples received news of the death of a parent. The comfort and support the bereaved couple received was a testimony to how, in just a few days, the shared faith of people on a pilgrimage can create a community.

Was God’s hand at play here? Was it his plan to have this couple on this pilgrimage at this particular time? What was God trying to tell them — and us — at this moment?

Of course, the Mass in Sacré-Cœur was dedicated to heaven’s new resident.

Our Lady in business class?

The Catholic France pilgrimage was dedicated to the late Bishop Joe Sandri, who was going to lead it. How would the Italian-born bishop have handled the crises created by Alitalia’s incompetence and duplicity? No doubt, he’d have delivered some witty one-liners.

These were not in short supply, even at times of frustration and exhaustion. One wag offered the theory that while the statue of Mary in the cargo hold might have protected us in the thunderstorm, had the statue’s owner bought her a passenger ticket — in business class, to make sure — we might have caught our flight home in time.

In the event, the group returned home with a delay of almost 30 hours, after 47 hours in transit limbo (counting from our departure towards Paris’ airport).

They were brought home by Ethiopian Airlines, which our pilgrims agreed is superior to Alitalia, and most European airlines.

As the organising team in Cape Town worked overtime to secure domestic connecting flights for the pilgrims, my devoutly Catholic mother-in-law asked God for some guidance in her prayers for the group to come home soon and safely. Next thing she knew, she happened upon the following passage from Isaiah (43:5-7):

“Have no fear for I am with you; I shall bring your descendants from the East, and gather you from the West. To the North I shall say, ‘Give them up,’ and to the South, ‘Do not obstruct them.’

The Word of God!

Next week: Getting close to a missionary saint.