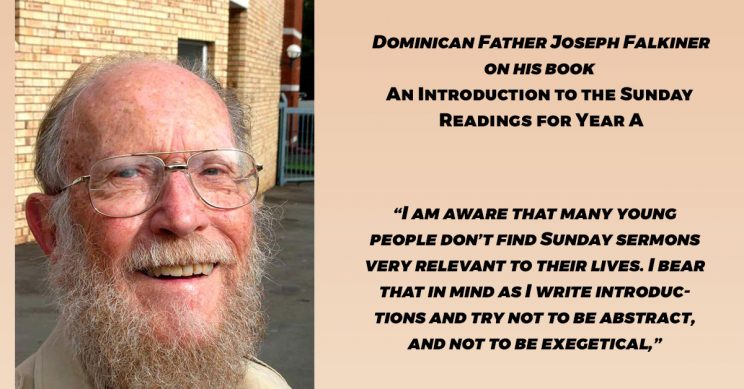 Dominican Father Joseph Falkiner (pictured) was motivated to write a book of reflections on the Sunday readings for the coming year by positive feedback received over the years from many people, including priests who said his introductions had helped them to prepare their sermons.

Fr Falkiner’s book, An Introduction to the Sunday Readings for Year A of the Lectionary, begins with the first Sunday of Advent, this year on December 1, and ends with the feast of Christ the King next November.

The book contains introductions to a few feasts which may be celebrated on Sundays, such as the birth of John the Baptist, the Assumption of Our Lady, the Triumph of the Cross, All Saints, the Immaculate Conception, and the Commemoration of the Faithful Departed.

“These introductions are very short. I just looked for a common theme that could be connected to all three readings. I tried to choose a theme that would be relevant to the reader,” Fr Falkiner told The Southern Cross.

“I am aware that many young people don’t find Sunday sermons very relevant to their lives. I bear that in mind as I write introductions and try not to be abstract, and not to be exegetical,” he explained.

Fr Falkiner, whose religious congregation is known as the Order of Preachers, strongly believes that a sermon should pick just one point from the readings and stay with it. A preacher should illustrate the point with stories of his own and refer, if necessary, to well-known competitors from other parts of Scripture that also deal with the point.

“A sermon should begin with the preacher announcing the point that he is going to deal with. Before developing the point, he could briefly tell his congregation how that point comes up in the readings of the day, followed by his exposition of what he wants to say,” he said.

“If a preacher does this, the congregation will find it much easier to follow — and should anyone ask them afterwards what the sermon was about, they will find it easy to answer,” the Dominican noted.

In his reflections, the author can draw from half a century of priesthood: on December 13, Fr Falkiner will celebrate the 50th anniversary of his ordination.

He traced the motivation to write the book to last year, when he was doing supplying in a parish on the edge of Soweto.

“I was approached by a young woman who edited the parish weekly bulletin. She told me that the parish priest — who was away on holiday — normally provided her with such introductions to the readings. While I was there, would I please do the same,” he explained.

Shortly after, Fr Falkiner was transferred to the Dominican community in Pietermaritzburg, which provides pastoral care for Catholic students at two universities.

“I got the idea that these students might appreciate something similar, so I continued writing weekly introductions and posting them on the Internet, and on various Facebook pages they might be following. I expanded it to make it also available to Catholic students at other universities throughout South Africa. I also sent it to Radio Veritas,” Fr Falkiner said.

That’s when the feedback started coming in from others, including priests, who said the reflections helped them prepare their sermons.

Earlier this year, Fr Falkiner’s superior said that he would like to have these readings in book form.

The priest envisages there will eventually be three volumes to cover the three-year cycle of readings.

An Introduction to the Sunday Readings for Year A of the Lectionary, sells for R150 and is available from joefalkinerop@gmail.com