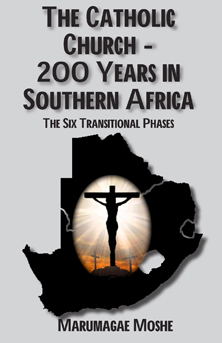 South Africans “are good at producing good policy documents but are short on implementation”, Marumagae Moshe points out in his book.

This, he argues, also applies to the not wholly successful implementation efforts such as the Johannesburg archdiocesan synod of 2009 and the SACBC pastoral plan of 1989, which his book evaluates.

Given the recently concluded synod of the archdiocese of Johannesburg and the impending release of the SACBC’s new pastoral plan in January 2020 — the successor documents to those Moshe is reviewing — the publication of this book is timely.

Moshe — who at 24 was appointed chair of the parish financial committee at Pimville in Soweto — proposes methods from the business world, and with laity taking leadership.

But before he gets to make his recommendations, Moshe reviews aspects of the Church’s 200-year history in South Africa.

While this is by no means a history book — those who are looking for that might be better advised to turn to the works of Dr Joy Brain — Moshe does offer particular insights into the black urban experience of the Church.

The author’s objective of brevity lends the historical narrative a staccato tone. There might have been merit in extending the historical section into a separate book.

Some episodes call out for expansion, such as the conflict between St Peter’s Seminary rector Fr John Lebamang Sebidi and the SACBC, which reveals much about differences in perspectives that could exist between anti-apartheid bishops and activist clergy.

Moshe also recalls some of the absurdities under apartheid. For example, when white priests (such as Frs Boyce, Winters and Muldoon) and religious Sisters insisted on staying among the people of the townships to which they were appointed, the apartheid regime carved out a white group area in Soweto especially for them.

There are also fascinating tidbits. So we learn that Albertina Sisulu, a convert to Catholicism during her schooling, once wanted to become a nun.

A priest told Albertina that her vocation was in serving the people in a secular profession. So she became a nurse and struggle icon instead.

Moshe reminds us that the struggle for equality and justice is not over: “[W]e can never have peace and security without justice in its totality, including economic justice, social justice and religious justice,” he writes.

This is also true of the local Church which is in the process of transformation. Moshe notes that many traditionally white parishes now have black priests.

“This causes turbulence: white South Africans withdraw from activities of the Church and the parish finances dwindle,” he avers. He proposes the formation of “racial harmony PPC sub-committees” to bring about racial coherence, tolerance and understanding in parishes.

Moshe’s observations provide a good starting point for fruitful dialogue on such issues.

So should his blueprint for reorganising the running of parishes, and, indeed, the local Church.

This includes a SWOT analysis which intends to identify a Church structure’s strengths, weaknesses, opportunities and threats, so that these can be strategically acted on.

The author gives his own ideas on the state of the local Church in his SWOT analysis; these can serve as a starting point for further review.

Likewise, his scenario planning is a useful guide for implementation.

Moshe offers some interesting ideas and insights, especially into the intersection between Church and society. The reader may embrace them or take issue with some of these and offer alternative points and solutions.

What Moshe has provided is a helpful framework from which fruitful discussion can proceed.

The Catholic Church—200 Years in Southern Africa: The Six Transitional Phases is available at R190 from the author by e-mail