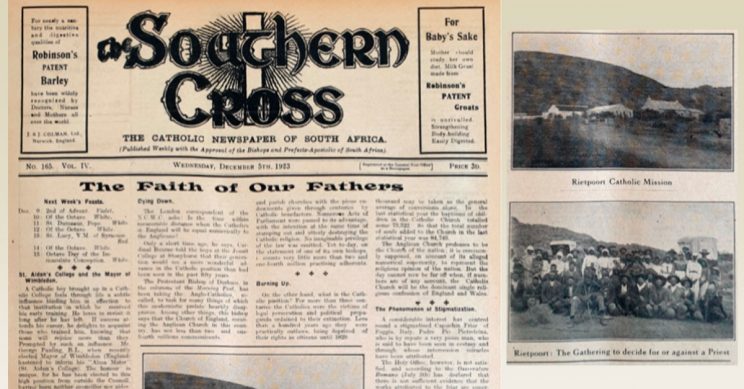 Every week for the duration of our 100th year, we dig an old issue of The Southern Cross out of our vaults.

Considerable interest has centred lately on a stigmatised Capuchin friar of Foggia, Italy. Padre Pio Pietrelcina has been credited with having interceded in miracles. But the Vatican’s Holy Office has declared that insufficient evidence exists to attribute the works of the friar to the supernatural.

Reporting on his visit to Rietpoort mission near Mariannhill, Fr Leeson found that the “apparent Catholic atmosphere of the whole place [took me] back again to Ireland”. When the Angelus bell rang, the workers in the fields paused to devoutly recite the noon prayer.

In his Catholic Notebook, Fr C McCarthy bemoans attempts by “what remains of Protestantism” and freemasons to discredit Pope Pius XI as a friend of fascist dictator Benito Mussolini.

In his editorial, Mgr John Morris writes that “belief in papal infallibility was deeply rooted before the actual definition in 1870, and the same is true of belief in the Immaculate Conception of the Blessed Virgin Mary”.