On December 3, news spread quickly that two priests had been killed and two injured in a car accident. With some people always keen to be first with the news, it was on social media before the families and friends of the priests could be informed. FR MATHIBELA SEBOTHOMA of Pretoria says that this is wrong. 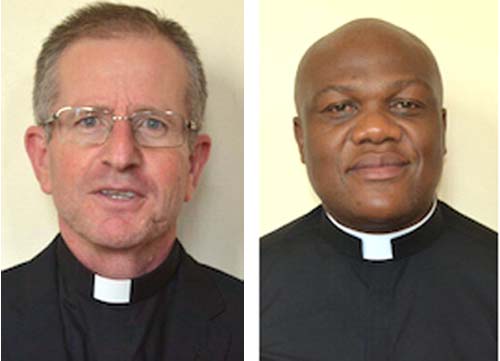 Fr Owen Wilcock and Fr Sibusiso Zulu, who were killed in a car accident on the N1 on December 3. Fr John Masilo Selemela and Fr Ricardo Smuts were injured in the crash.

Yesterday evening I came to visit patients at Steve Biko Academic hospital in Tshwane. It was about 8pm. In the car my two passengers were chatting about pastoral experiences when one of them got a call. All I could hear was moan and lament from his voice.

Since I did not have courage to inquire, I was relieved when the other brother asked: “What happened?” He explained that he had received a WhatsApp from the Secretariat of the Southern African Catholic Bishops’ Conference. He announced that people I know, studied with, and worked with were involved in a fatal accident on the N1 near Mokopane.

Then he mentioned the names of the fatalities: Fr Owen Wilcock and Fr Sibusiso Zulu. I was shocked and devastated and numb.

He also revealed that my friend Fr Masilo Selemela, rector of St John Vianney Seminary, was “critically injured”, together with Fr Ricardo Smuts. I associate the word critical with ICU – Intensive Care Unit.

Soon after that I got a call from Fr Oupa Kgage from Klerksdorp who confirmed receiving the same WhatsApp message. I called Fr Selemela. He did not answer my call. I then called Fr Molewe Machingoane of Witbank diocese, the former rector of St John Vianney Seminary. He assured me that Fr Smuts and Selemela were doing well under the circumstances, and were not critical.

Source of the news

The WhatsApp message was a copy of an email sent by Sr Hermenegild Makoro CPS, the secretary-general of the bishops’ conference. It was her fiduciary duty to relay the sad news to our bishops. But at that moment, her intention was only to inform the bishops, as was clear in her form of address. After speaking to some priests from Eshowe diocese, I became aware that they did not yet know about the bad news. 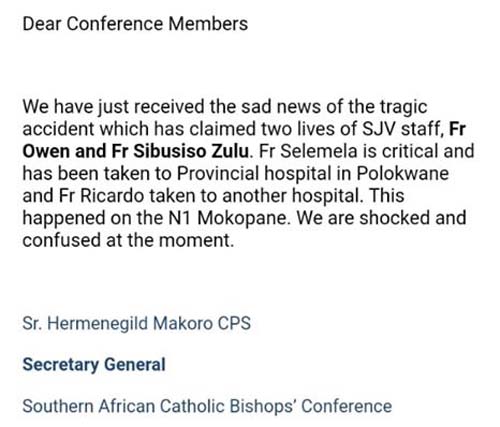 Sr Hermenegild Makoro’s message to the bishops and other Church leaders.

I have been to Nongoma where Fr Zulu comes from. It is a rural town. But the message of his death was already viral – spreading like wild fire. This morning I got a call from Tzaneen asking if I could confirm that Fr Selemela was fatally injured. On Facebook, somebody else said he had received a message that there were no fatalities. So much confusion!

As a pastor, I am often asked by hospital staff to inform relatives of the demise of their loved ones. They presume that with that my education and experience, I am more disposed to deliver the message in a more compassionate and humane way.

My reason for going to the hospital after my evening Mass was to pray for a dying patient who was on life support but clinically dead, according to what the relative said. In the ward, the other patients were not aware there was an impending death. I don’t think the nurse who showed me bed side knew what the doctor had already told the family.

As priests we are not only bound by the seal of confession, we also have a duty of professional and pastoral confidentiality just like doctors, nurses, lawyers and counsellors.

What happened on the N1 near Mokopane is now public knowledge, and relevant stakeholders have been informed.

But think before pressing the send button. Wait at least 24 hours before posting about a loved one’s death. That way, there is time for the deceased’s family and friends to be personally contacted about their loved one’s passing. Consider letting those closest to the deceased post the news on social media first, if they wish to. There is nothing wrong about sharing information. But timing is important.

Many wounds, difficult to close, have been opened by irresponsible usage of the wonderful media God has given us.

May the souls of Fr Sibusiso Zulu and Fr Owen Wilcock rest in peace.
May Fr Ricardo Smuts and Fr Masilo Selemela find healing that only God can give.

The Wounds of Social Media Violence