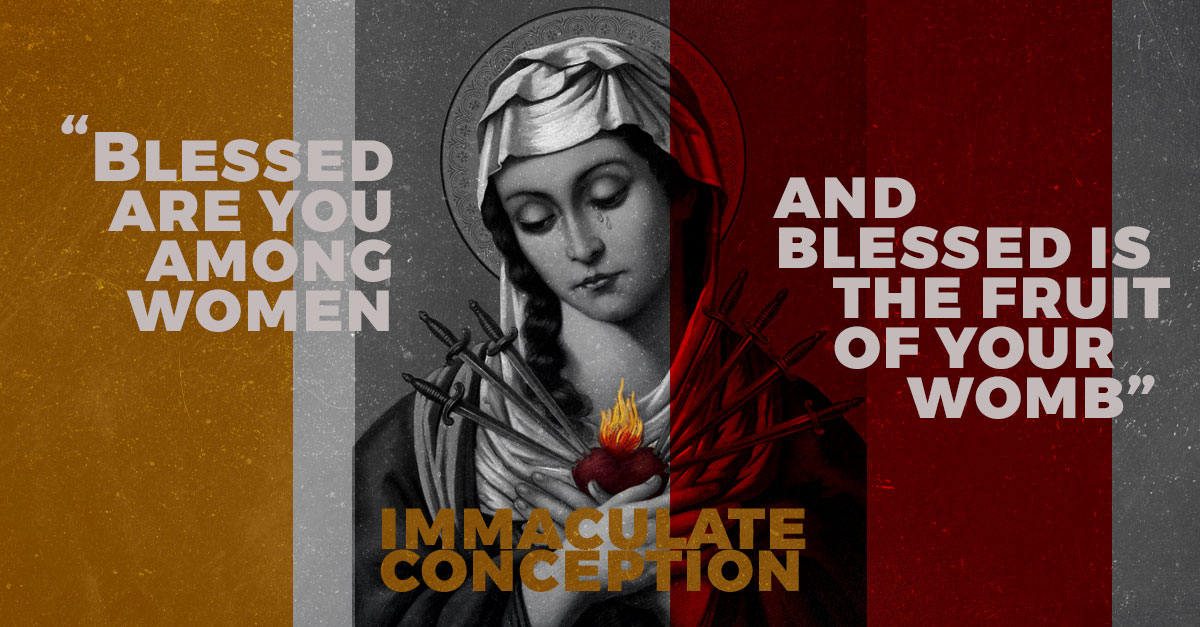 It was in Lourdes on March 25, 1858, that Mary revealed to Bernadette Soubirous that she was the Immaculate Conception—and of all the days in the Church calendar, this was the feast Day of The Annunciation.

The Immaculate Conception is one of the most significant event in human history, and it demonstrates the unique position that Mary holds of all human beings. It also shows how she is an intrinsic part of God’s plan to draw us to his love.

Pope Pius IX made this an infallible teaching of the Church on December 8, 1854.

Another teaching of the Church regarding Mary is her perpetual virginity, and here there’s been some contention about the mention in the Gospels of Jesus having had brothers, but this confusion is simply due to etymology.

The majority of the Old Testament was written in Greek, and the Greek word for brother is adelphos which is a union of a for “same”, and delph for “womb”. But adelphos was also used to describe a cousin or a nephew. So the brothers mentioned were not sons of Mary, but relatives of Jesus. St Jerome taught in the 5th century that they were most probably his cousins.

The question could be asked why it was necessary for the mother of Jesus to be devoid of sin, but to answer this question we only need to look at Exodus 19, which shows that nothing imperfect can exist with God.

We know this because when God was present on Mount Sinai, he warned Moses not to allow anyone to come near his presence.

“Put limits for the people around the mountain and tell them, ‘Be careful that you do not go up the mountain or touch the foot of it. Whoever touches the mountain shall surely be put to death’” (Exodus 19:12).

And in Genesis we see that Adam and Eve had to leave the presence of God because they had sinned. In other words, it’s physically impossible for God to be in the presence of anything imperfect.

Yet, despite God being perfect and man being inherently sinful, he still wanted to unite himself with his creation in the most intimate and loving way possible, which was by allowing Jesus to become man.

This shows the depth of love that God has for us, in that he was prepared to allow Jesus to assume the lowly condition of a human being, with all its inherent vulnerability.

However, although Jesus became incarnate, he would always retain his divinity, which is why Mary had to be devoid of sin, as this was the only environment in which the mutually exclusive entities of a perfect God and man could co-exist.

Quite simply, the conception of Jesus would have been impossible if it were not for this unique quality of Mary.

At the Annunciation, the Angel Gabriel said to Mary: “The Holy Spirit will come upon you and the power of the Most High will over-shadow you. So the Holy One to be born will be called the Son of God.”

It’s remarkable that the Son of God being born to a virgin was prophesied 700 years earlier by Isaiah, as was the prophecy of Micah that the Messiah would be born in the insignificant village of Bethlehem, which had a population of only several hundred people at the time.

As Isaiah said, this sign for mankind would be given by Almighty God himself, and so we can see here the unique position that Mary occupies of all the women who have ever lived — she was completely without sin and therefore able to carry the Christ in her womb.

In the Gospels, we read how Jesus entrusted the apostle John to Mary at Calvary.

“When Jesus saw his mother there, and the disciple whom he loved standing nearby, he said to his mother, ‘Dear woman, here is your son. And to the disciple, Here is your mother’” (John 19:25).

The depth of love between mother and son was plain to see at Calvary, and the fact that Jesus entrusted Mary to John shows his great concern for her wellbeing.

But Jesus surely didn’t just give John a spiritual mother in Mary, but he also made Mary the mother of all of God’s children!

The Catholic Church has always taught that Mary was assumed into heaven, both body and soul. But at the Council of Chalcedon in 451 AD, the Emperor Marcian asked the patriarch of Jerusalem to bring the relics of Mary to Constantinople so that they could be enshrined there.

The patriarch reported back that there were no relics of Mary in Jerusalem! He said that Mary had died in the presence of the apostles; but that her tomb, when opened later, was found empty. So the apostles had concluded that the body had been taken up into heaven.

The tomb of Mary

The church of the Sepulchre of St Mary at the foot of the Mount of Olives has a crypt which many believe was the resting place of Mary until her assumption, and that it was this tomb, that when opened was found to be empty.

Over the centuries, various churches were built and later destroyed on this site, but the crypt has always been left undamaged.

Even in 1187, when Saladin destroyed the church that had been built by the Crusaders in 1130, he didn’t damage the crypt itself.

The actual site where Mary is thought to have died (as opposed to where she may have been buried) also became a place of pilgrimage. Today, the Benedictine abbey of the Dormition of Mary stands on this site on Mount Zion, just outside the old city walls near Jerusalem’s Zion Gate.

So it’s clear that Our Lady played a unique role in the Son of God becoming incarnate in our world. Her womb was an inviolate sanctuary, protecting Jesus as he grew inside her, and so Mary is surely also a perfect model of motherhood for our world.

Mary is also our spiritual mother, and ever since her assumption into heaven, she has performed the vital role of intercessor for us to her Son.

If we will only allow her to, Mary will draw us to a deeper devotion of Jesus, so helping us along the path to eternal life.

The Immaculate Heart of Mary in Brief