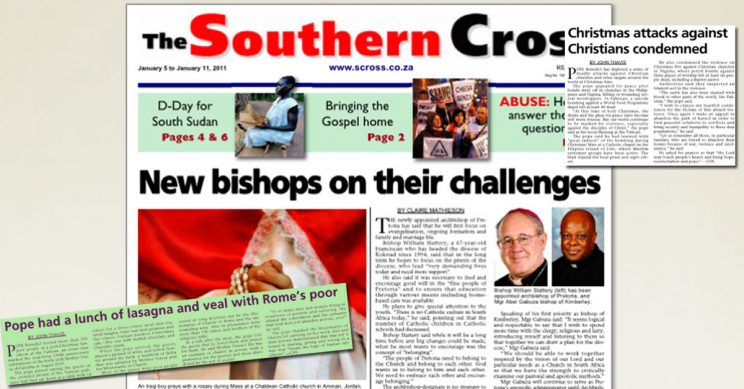 Every week for the duration of our 100th year, we dig an old issue of The Southern Cross out of our vaults, and highlight a few stories from that edition, as well as reproducing its front-page. This Week we look at the 5 Jan 2011 issue.

Bishop William Slattery, a 67-year-old Franciscan who has headed the diocese of Kokstad since 1994, has been transferred to head the archdiocese of Pretoria, while Pretoria’s vicar-general Mgr Abel Gabuza has been appointed bishop of Kimberley.

Pope Benedict XVI has deplored a series of deadly attacks against Christian churches and other targets during the Christmas season in Pakistan, Nigeria and the Philippines.

Vatican-related Wikileaks disclosures show that the United States and other countries take the Vatican and its diplomatic activity very seriously. The Wikileaks cables have described Vatican diplomats as generally well-informed and as influential lobbyists behind the scenes.

As a new country is born

In his editorial, Günther Simmermacher writes that as the people of South Sudan prepare to vote for the independence of their region in a January 9 referendum, “the international community must provide South Sudan’s democratic institutions with the necessary support and tools to maintain the new country’s integrity”.