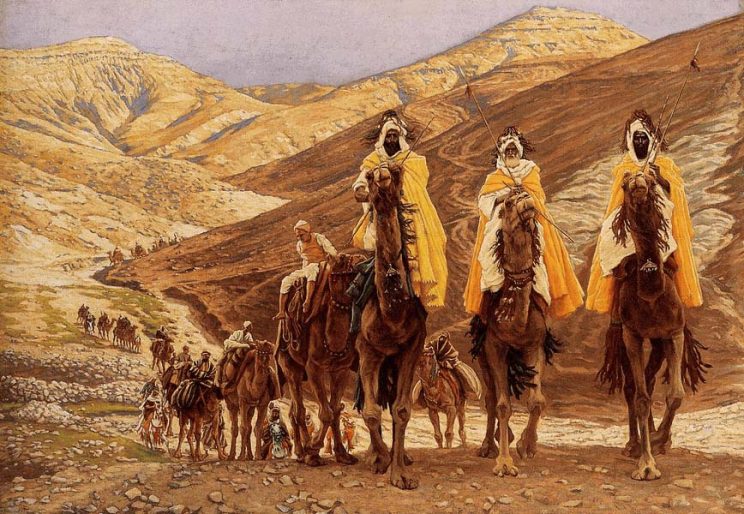 Journey of the Magi painted by James Tissot

The feast of the Epiphany celebrates the manifestation of the divine nature of the human Jesus, the newborn King. But as we celebrate the visit of the magi, and with them pay homage to the Saviour, we also note that dark clouds are gathering.

On their way to locate the child, the guileless wise men let it slip to King Herod that there was a new king. What we know, and the magi didn’t, is that Herod will unleash murderous terror on infant boys.

The Holy Family eludes the fate of infanticide by escaping, on a hazardous route, to Egypt. By that act, Mary, Joseph and Jesus became refugees and migrants.

Tradition suggests that the Holy Family was pursued by agents of the Roman army, working in the service of King Herod. They had to move from place to place — according to Egyptian tradition, 18 sites of refuge — to avoid being caught.

In all these places they will have had help from locals who offered safe shelter and food, and perhaps jobs for Joseph by which to earn  sustenance for his family.

When the danger was over, the Holy Family left their exile in Egypt to return to Palestine.

We may not forget that Mary, Joseph and Our Lord once were migrants, escaping their own land in the face of grave danger.

That story has played itself out over and over again, throughout history. Today, migrants and refugees are at the centre of political crises in many traditionally Christian countries.

Migrants and refugees — Mary, Joseph and Our Lord — are attacked in South Africa, put into detention camps in the United States, left to drown in the Mediterranean.

To be sure, there are Middle Eastern countries which have embraced refugees from wars. Countries such as Lebanon and Jordan have given refuge to those crying out for it, at a scale no European country has matched.

But accepting refugees and migrants is not a popular political policy in countries that have forgotten the suffering caused by political upheaval.

Germany’s governing coalition of conservative and social-democratic parties are paying the price for giving refuge to those in need of it, as Egypt once did to the Holy Family. Populist parties thrive on anti-migrant rhetoric.

Rejection of the refugee is not a new phenomenon, of course. While Nazi Germany persecuted Europe’s Jews, many Western countries — including the US, Britain and Switzerland — refused to provide open ports of refuge.

Rejection of the refugee is not a new phenomenon, of course. While Nazi Germany persecuted Europe’s Jews, many Western countries — including the US, Britain and Switzerland — refused to provide open ports of refuge.

The repugnant policies of those countries were rationalised by reference to proper bureaucratic processes and the difficulties of absorbing refugees. But at the heart of it was anti-semitism.

Today we hear the same set of justifications. And at the heart of it is bigotry.

The resistance to accepting political refugees is indefensible. But so is the callousness with which economic migrants are treated — to the point of interning them and letting them drown in perilous waters.

But most economic migrants are not uprooting themselves because they want a better television set. They leave because they are desperate, even at the risk of crossing dangerous waters in unseaworthy vessels or using unscrupulous traffickers who might let them die an agonising death in the back of a truck.

To reduce such people to the status of “illegal immigrants” is to put cold man made laws before the demands of mercy. How can otherwise decent people not be filled with compassion?

It should give us cause for humility when victims of xenophobic attacks in South Africa say that even being subjected to violence here is better than returning to their homes.

For Christians in particular, hostility or even indifference to the fate of migrants cannot be an option.

Would we turn on the North African migrant Simon of Cyrene — whose name locates his origin to present-day Shahhat in Libya, and who became a leader in the early Church — and burn his shop?

Would we turn Mary, Joseph and their baby away at the border of Egypt as “illegal immigrants” who are claiming to be refugees on the basis of a dream?

Would we separate the Holy Family and lock them up in internment camps? Would we let them starve in the desert?