How Church Shaped The Movies 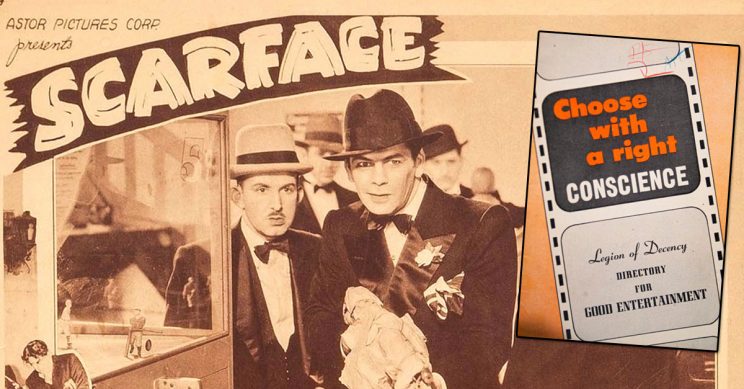 A lobby card for the 1931 gangster movie Scarface, one of the films which gave rise to the call for censorship of films and the Legion of Decency. (inset) This is the cover of a directory of film ratings offered by the National Legion of Decency. (CNS photo/Chaz Muth)

Once upon a time, the Catholic Church dictated to Hollywood what was morally permissible in movies, as CHAZ MUTH explains.

Movies have enchanted the public since the late 19th century, providing audiences with vivid storytelling on a host of topics and conceptually transporting them to distant places.

The art form was able to merge literature, theatre and even biblical accounts, and project it all onto accessible screens for the masses to take in.

However, as the film industry grew in the early 20th century, Catholic Church leaders became concerned about some of the content that had become so readily available to their flock.

Priests in the United States began to discuss films they deemed objectionable during Mass and to instruct the faithful to stay away from “sinful” content.

Throughout the United States, Catholic groups began to organise in an effort to influence filmmakers into creating content that reflected moral standards and wouldn’t lead viewers to sin.

In 1915, the US Supreme Court ruled in its Mutual Film Corporation v Industrial Commission of Ohio decision that free speech did not extend to movies, and states throughout the US began to introduce censorship legislation.

Faced with mounting political pressure and the possibility of having to comply with hundreds of different decency laws, movie studio heads worked with Jesuit Father Daniel A Lord to develop the 1930 production code of standards for wide-release films, basically as a way of self-regulating.

“But, at first the code was really not being enforced,” said John Mulderig, current assistant director for media reviews for Catholic News Service.

In response, in 1933 the US bishops established the Legion of Decency to directly address the morality of films being produced by the motion picture industry.

“The hope was that if the Legion were present and were able to say, ‘You’re going to lose a significant portion of your patronage, that is the Catholic population are going to obey their bishops and stay away from not only bad movies but perhaps boycott [cinemas] that show movies that violate the code, then you’re going to take a hit at the box office,’” Mr Mulderig explained.

“That indeed is exactly what happened—the bishops managed to show in a very short time that they had command of the faithful,” he said.

“The faithful would obey them and not go to certain movies or not even go to a movie theatre for six months that had shown a film that contravened the production code.

“As soon as that happened, Hollywood sat up and took notice—and this brought on the enforcement of the production code… in a serious way,” Mr Mulderig said.

Under the direction of Joseph Breen, a prominent public relations professional and pious Catholic, the MPPDA in 1934 established the Production Code Administration, requiring all movies to receive a certificate of approval before release.

Hollywood studios adopted the code to avoid governmental censorship, and that code actually led to the disbanding of many local censorship boards.

It gave Mr Breen the power to change scripts before shooting actually began, and he’d frequently tell producers what they needed to alter in their films to avoid a “C (Condemned) Rating” by the Legion of Decency, whose reviewers were given an advance screening before its release.

“No exhibitor would want to release a C-rated movie,” said Bernard Dick, a renowned film scholar, author and movie reviewer for the National Catholic Office for Motion Pictures (NCOMP), as the Legion was renamed in December 1965.

“Breen would get the script and look at it and say, ‘These lines are sex-suggestive.’ That was one of his famous phrases,” Mr Dick said.

The Legion of Decency wasn’t just concerned about the depiction of sexually explicit content.

It was also troubled by profanity, violence, criminal activity and how religion was sometimes depicted, said Frank Frost, a founder of the US membership affiliate of the International Catholic Organisation for Cinema—now called Signis—and a movie critic for NCOMP from 1964 to 1971.

Gangster films that came out during Prohibition—the era when alcohol was illegal in the US—sometimes depicted murderous criminals as heroes, scenarios that could easily prompt a “C” rating, said Mr Mulderig.

Gritty subject matters were not always condemned, however.

Leaders at the Legion of Decency realised there were benefits to having movie plots depict the seamier part of life where there were elements of promiscuity, crime and immorality—as long as the storyline had a redemptive quality to it or provided a price paid for sinful lifestyles. Those films didn’t necessarily receive a condemned rating, Mr Mulderig said.

The Legion of Decency would send out a team of reviewers and consultants to a preview screening of each wide-release film, and they would write their impressions of the movie.

A synopsis of the movie, its classification and sometimes the reasons why it was given would then be distributed in a newsletter to subscribers and to the National Catholic Welfare Council news service (the precursor to Catholic News Service), which would distribute it to its subscribing Catholic newspapers throughout the world.

The following is a version of that pledge:

“I condemn all indecent and immoral motion pictures, and those which glorify crime or criminals. I promise to do all that I can to strengthen public opinion against the production of indecent and immoral films, and to unite with all who protest against them. I acknowledge my obligation to form a right conscience about pictures that are dangerous to my moral life. I pledge myself to remain away from them. I promise, further, to stay away altogether from places of amusement which show them as a matter of policy.”

Though the pledge was voluntary and didn’t carry penalties from the Church to violators, people at Mass did feel an obligation to recite the oath, Mr Mulderig said.

“I presume that if you refused to do that, you would be somewhat conspicuous,” he noted.

As a boy in the 1950s, Jesuit Father Kenneth Meehan was an enthusiastic movie patron who had three cinemas near his childhood Baltimore home. He eagerly awaited the Legion of Decency newsletter to arrive in the post, telling him about the movies ready for wide release.

Fr Meehan admitted that he frequently looked for the movies condemned by the Legion, figuring that if the Church saw fit to be outraged by the content, the film was probably racy enough to satisfy an adolescent’s salacious appetite.

Regardless of his youthful indiscretion of mind, Fr Meehan did answer the call of God and during his summer break from seminary studies, he took a job at the New York office of NCOMP in the early 1970s as a movie reviewer.

“This was a dream come true for me,” he said. “I was allowed to blend my calling with my love of the movies and of writing.”

He would use his movie reviewing experience after he was ordained a priest, teaching in Catholic schools for the next several decades, frequently in classes dedicated to film studies.

During the middle of the 20th century, the Church grappled with changes in taste and public morality and its impact on the film industry changed.

In the 1960s came the Legion of Decency’s name change to the National Catholic Office for Motion Pictures. This was meant to reflect that the organisation’s mission had evolved, that some of its moral standard requirements had become less stringent.

It began to publish reviews that evaluated the artistic qualities of a given film.

The name changed again in the 1970s to the Catholic Office of Film and Broadcasting.

In 2010, it became the Media Review Office of Catholic News Service (CNS), which is owned by the US bishops but is editorially independent.

By the 1980s, the Catholic film office lost negotiating power with movie producers and eventually discontinued producing its newsletter.

But its classifications and movie reviews continue to be one of the most popular features among CNS subscribers and still grace the pages of many Catholic publications and websites.

He said he thinks the reviews are helpful for “parents of underage kids who want guidance about exactly what their child will see if they go to this movie”.

The reviews are also useful for “adult Catholics who specifically want to avoid certain things”.

“I think it’s helpful that we’re engaging with the film in the overall assessment of ‘Is this film one that upholds Gospel values or contradicts Gospel values?’,” Mr Mulderig said.—CNS