Why Is It So Hard For Us To Say Sorry? 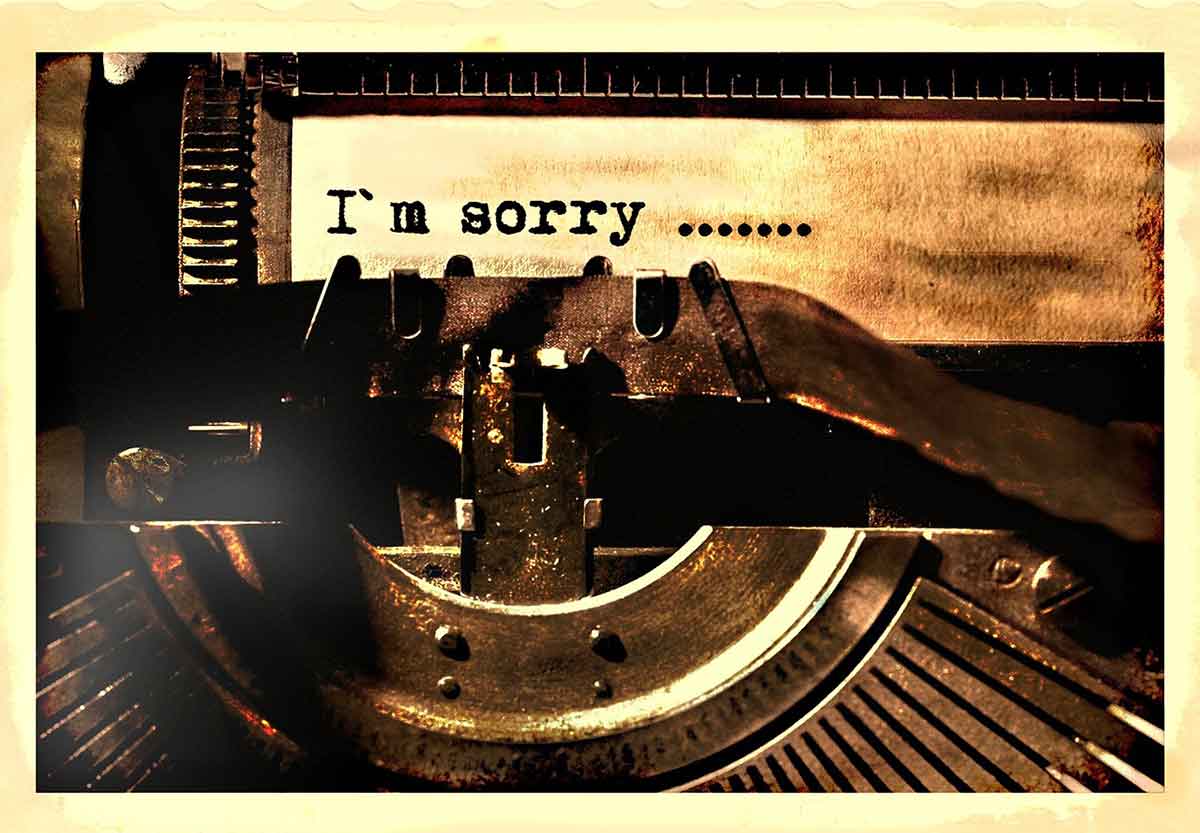 A  cheesy cartoon from the 1970s had the slogan, “Love is… never having to say you are sorry”. I think that as Christians we should beg to differ, because one of the marks of Christian love is that we should be willing to say we are sorry.

Unless we do so, we will persist in kidding ourselves that we have not done anything wrong and so run the risk of repeating our mistakes.

Pope Francis recently gave a good example of this. Other journalists and commentators have discussed at great length the now-infamous hand-slapping incident in St Peter’s Square on New Year’s Eve and whether the pope reacted out of anger or pain.

But what struck me was that at the earliest opportunity — and in a forum even more public than the original incident—Pope Francis apologised for his behaviour. What is more, he did so without trying to justify or mitigate it.

“We often lose our patience; me, too, and I apologise for my bad example last night,” he said. The pope has not only apologised but given us permission to keep an eye out for this kind of behaviour in the future.

It was a refreshing example of what makes his leadership style different. When was the last time that a politician apologised for ignoring a voter, or a mayor apologised for poor service delivery, or a president apologised for the rolling blackouts?

We get plenty of explanations — some more believable than others — but rarely an apology.

It is right that we demand better accountability from our politicians. But do we, as a Church, set a good example?

We should be able to expect a greater willingness to apologise from our religious leaders since, after all, accountability is at the heart of our life as Christians. We have the sacrament of Reconciliation which begins with the need to confess and express “a firm desire of amendment”.

More frequently than that, we are led in a collective act of saying sorry in the penitential rite at the beginning of every Mass. Note that in the words we say we are confessing not only to God but also to the community — ”and to you my brothers and sisters”.

Note also that it is not the insincere apology of people who say, “I am sorry if I have upset you”, or  “I am sorry that you are upset”. Both of these greatly weaken the admission of responsibility. Here we say categorically: “…that I have sinned through my own fault”.

I am reminded here again of Pope Francis’ words when asked by a journalist how he would describe himself. He drew on the language of St Ignatius, the founder of the Jesuits, and familiar to any who have followed the Spiritual Exercises: “I am a sinner on whom the Lord has turned his gaze.”

But perhaps admitting that I am a sinner might just be the kind of rhetorical device that politicians (and often celebrities too) use to appear humble, even when they are not. It is only when we admit specific mistakes and seek forgiveness that we genuinely show that we are aware of our faults.

Collective Sins of the Church

As the old millennium was coming to a close, St John Paul II apologised for a host of sins from the Church’s past: her treatment of Jews, Muslims, aboriginal people, slaves, women and Galileo.

These actions were symbolically important and the list was long (though not exhaustive). But, as has been pointed out, the sincerity of his apology of how women were mistreated by the Church in the past surely must be compared with his actions — or inactions — in addressing examples of mistreatment in the present. Isn’t that what we mean by a firm desire of amendment?

In fact, I am not sure that our religious leaders do always set a good example of admitting fault and asking forgiveness. Bishops, and conferences of bishops, are now asking for forgiveness for the failure to respond to the child abuse catastrophe. But often it is not coming from the bishop who was actually the one at fault but rather from his successor.

And, even then, the apologies have come after many, many years of denying the problem and usually only after external investigations have forced bishops to face the truth.

And this is not the only way in which some religious leaders — bishops, priests, provincials — have let us down. I can think of so many cases of mismanagement that I have seen ranging from liturgical translations, to poor appointments, selection of over-priced suppliers, irrational investment decisions, ignoring financial corruption, and bad governance of assets.

Each of these gets brushed under the carpet until someone else “blows the whistle”. That means that any apology that does emerge is too little and too late.

Our Leaders and Apologies

Pope Francis was helped towards his apology because the hand-slapping was so public. But can we rely on religious leaders to admit fault when there is no spotlight?

The shocking demise of Catholic Welfare & Development (CWD) in Cape Town has been extensively covered in this paper and other media. But again the public admissions of misconduct came only after it was too late to save the organisation.

And, so far at least, neither the directors nor the well-paid managers are the ones who have lost out. Instead it is the thousands of people who are no longer helped by the organisation.

A similar collapse last year befell Diakonia in Durban. Managers were paid significant salaries, even while it was known that they were underperforming; and the directors/trustees kept hoping that the problems would solve themselves. Often they lacked the time, the skills, the objectivity or the impetus to respond.

In the case of Diakonia, it was a range of Christian leaders who collectively neglected their duty to the organisation. With several Catholic NGOs (and CWD is simply the biggest example), mismanagement remains unchecked because often the priest or bishop does not want to admit that something is wrong.

In a Church structure where our religious leaders often behave as if they are only accountable to God, it is reassuring when, occasionally, they do show that they are accountable to the people of God and are not afraid to admit when they have messed up.

But there are some much bigger problems under our ecclesial carpets than the odd act of hand-slapping.