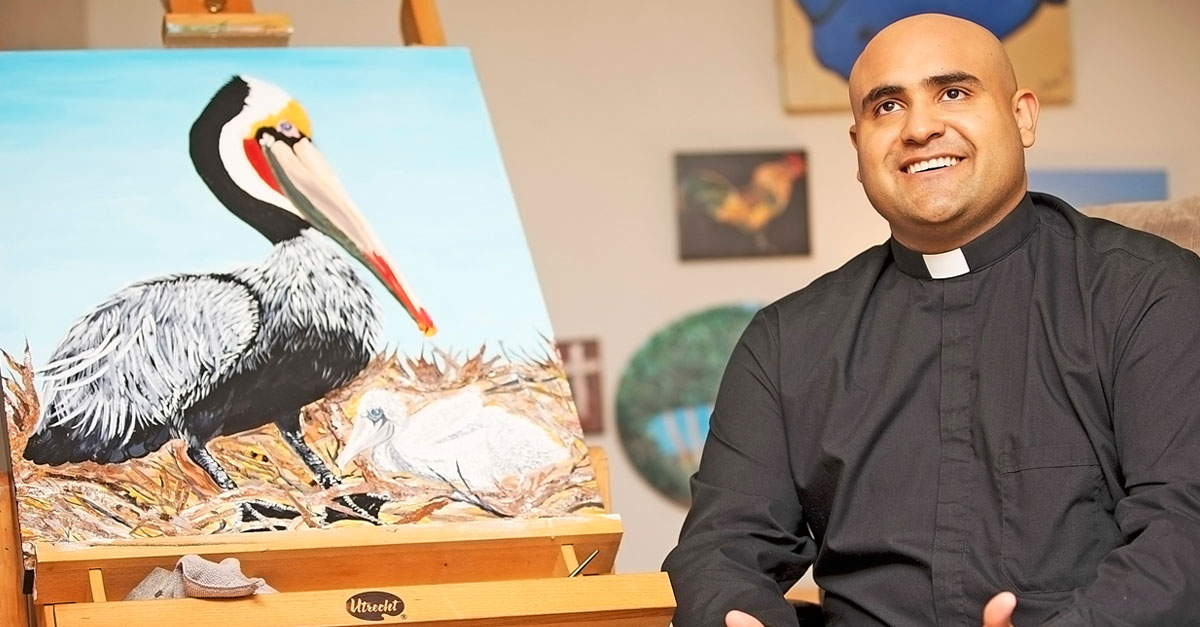 By Anna Capizzi Galvez – For Deacon Elmer Herrera-Guzman, painting is an act of prayer.

On his easel, a peacock bursts into colour. It fans out its feathers in bold green and blue strokes.

Rev Herrera-Guzman points to a completed piece, a pelican with a white pelican chick nested at its feet.

Pelicans are ancient symbols of martyrdom, he explained, since it was thought that pelicans pecked their chests to feed their own blood to their young. Christians later connected the analogy to Christ’s sacrifice.

A transitional deacon for the diocese of Dallas, Rev Herrera-Guzman is in his final year of studies at Theological College in Washington where he is completing a masters in divinity and bachelor in sacred theology. In 2011, when he first entered Holy Trinity Seminary in Texas, his spiritual director encouraged him to incorporate his artwork into his prayer life.

“I get distracted during prayer easily,” he admitted, but “to be able to sit down and pray for hours and use my skills, the gift that God has given me, the talent, really helps out my prayer because I am focused.”

The 30-year-old is working on a series of animals with Christian motifs, inspired by his sacraments of initiation class where he learned that a rooster signifies a “Christian preaching the Gospel before the dawn, before the coming of Christ”.

“I thought, what a revelation!” Rev Herrera-Guzman said.

He hopes to spur others to preach through art. “My plan one day is to take the art around Catholic schools and make contests for the kids to also do their research the way I do, and come up with a painting or drawing,” he said. “That will be using what God has given me to teach the Gospel.”

For now, he has encouraged his local community to showcase their artistic skills. Rev Herrera-Guzman founded an annual art exhibit at Theological College, which seminarians and local religious orders participate in and which features their work.

Building up others and preaching is a family trait. In El Salvador, where Rev Herrera-Guzman was born, his father began a radio station in his town, Santa Rosa de Lima, to give faith-filled sermons and talks.

His grandfather acted as a kind of delegate for the Church, travelling to the areas where the priest couldn’t often visit. “Like the arms of the priest where he can’t go,” his grandfather would go, visiting people, taking Communion, he said.

“I saw the priesthood in my grandfather. Everyone called him ‘Papa Yaco’,” an endearing title for his name, Ciriaco, Rev Herrera-Guzman explained. “So I thought everyone was related to me because everyone called him Papa Yaco. It was later that I found out that he wasn’t everyone’s father,” he said, laughing.

“But that left a great impression,” he added. “He was part of the life of the community.”—CNS