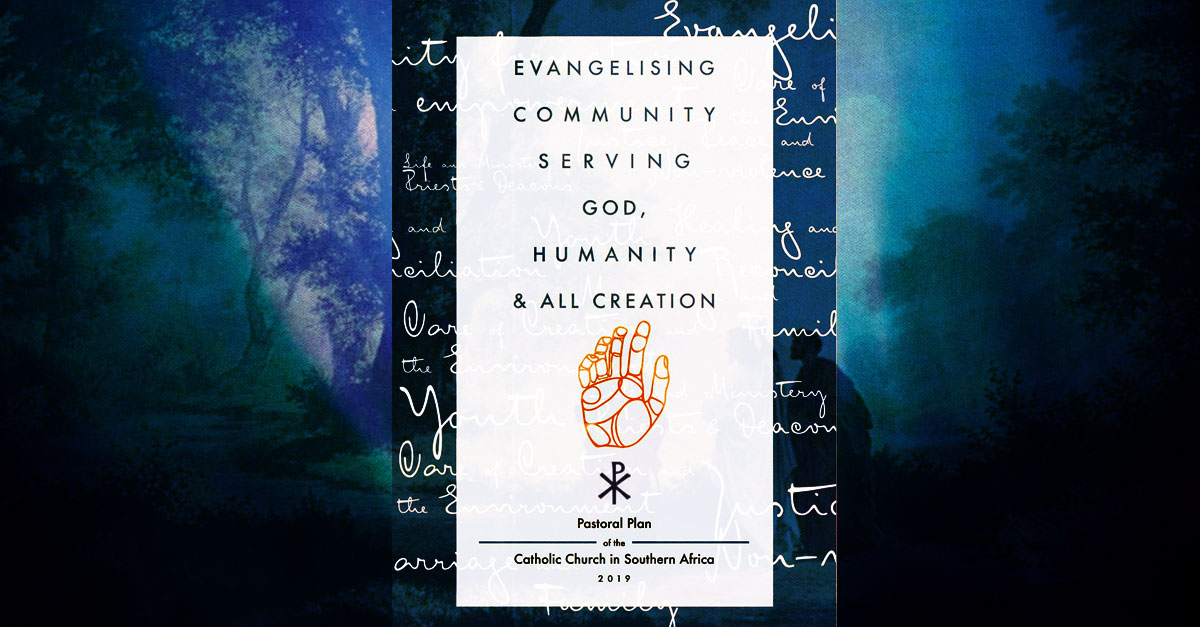 After many years of extensive work and consultation,  today, January 26, will see the official launch of the local Church’s new pastoral plan at a Mass in Soweto’s Regina Mundi church.

The new pastoral plan replaces its predecessor, Community Serving Humanity, which was issued in 1989.

That pastoral plan was compiled during the last (and most repressive) years of apartheid. Within just a year of its release, South Africa’s political landscape had changed fundamentally.

Much good came from Community Serving Humanity, but as a reference point for the local Church’s direction, it didn’t penetrate the consciousness of the wider Catholic community.

The relative successes and shortcomings of the implementation of the 1989 pastoral plan must help guide us as we begin to put into practice the 2020 pastoral plan.

The title of the new pastoral plan, Evangelising Community, Serving God, Humanity and All Creation, will probably not catch on, but it sums up its objectives well.

The introduction for the pastoral plan says that in intent, it “helps and guides us all to listen and respond to the leading of the Spirit, to enter into the Father’s plan for our Church and our world; to be missionary disciples of Jesus in the present and to let the Spirit guide us into the future”.

Within three umbrella areas, there are eight focus points: Evangelisation; Laity formation and empowerment;  Life and ministry of priests and deacons; Marriage and family; Youth;  Justice, peace and non-violence;  Healing and reconciliation; Care of creation and the environment.

These are indeed crucial areas of concern which present opportunities for fruitful engagement. It is good to see that the formation and empowerment of the laity enjoys a privileged place in the pastoral plan

It is good to see that the formation and empowerment of the laity enjoys a privileged place in the pastoral plan, as does the ministry of the clergy (though religious in the consecrated life might have been served to be included in the latter section).

We also hope that the focal area of “Justice, peace and non-violence” will animate the revival of Justice & Peace structures in those dioceses where that ministry has diminished, as a contributor in this week’s edition calls for. Indeed, without active diocesan and parish J&P structures, it is difficult to see how some intentions in the pastoral plan’s vision can be realised.

Indeed, without active diocesan and parish J&P structures, it is difficult to see how some intentions in the pastoral plan’s vision can be realised.

It is good that the section on “Marriage and Family” includes such important areas of pastoral care as hurting and broken families, divorced Catholics and single parents. May these not be an afterthought.

The Church’s task is to call and guide people towards their salvation. So the section on “Evangelisation” rightly ranks first (and we must hope that the final area, “Care of creation and the environment”, is not going to be the least of our concerns).

Indeed, social communications might have warranted a focal area of its own, raising the importance of media in evangelisation, a matter neglected by the local Church for the past quarter of a century.

The use of Catholic media and the Internet in evangelisation, especially through social media, should be at the centre of any missionary effort.

Let us be reminded of the importance of media every time we read the Scriptures — the brightest example of social communications.

Of course, in its limited format, the pastoral plan leaves many gaps to fill. It is a guiding document allowing for expansion where pastoral concerns or opportunities present themselves.

One of these must be the accompaniment of those abused by Church personnel, and those who feel marginalised by the Church and society.

Our prayer is that the pastoral plan will energise those already engaged in the Church’s pastoral activities, at all levels, and galvanise into action those Catholics who are not.

May the new pastoral plan fertilise the fields of a local Catholic Church that is missionary in nature and of service in the building of the Kingdom.