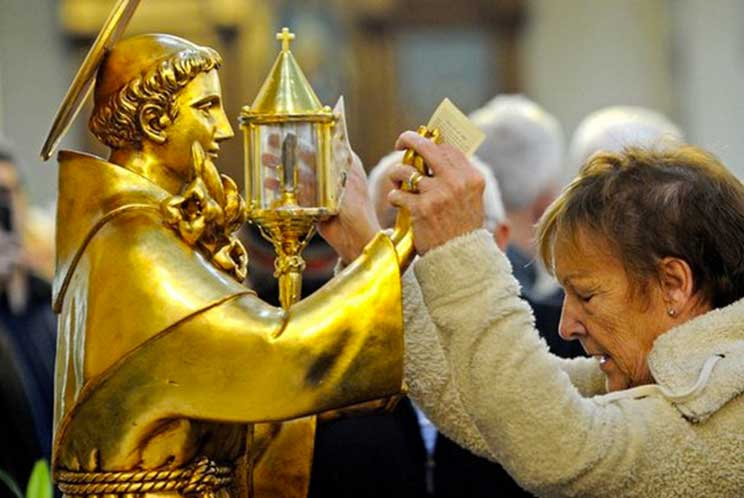 Why do Catholics venerate images, and doesn’t the Bible forbid this? Over two weeks, PROF MICHAEL OGUNU will address these and other questions about images in the Church.

An image is an imitation or likeness of a person or thing. Images need not be exact likenesses, but may vary from actual photographs to conventional figures which are representative of types rather than of real persons or things.

Images are different from symbols. While there can be images of any material thing or any person, non-material realities are better represented by symbols.

A symbol is some form or figure that is not a likeness but represents and calls to mind the unseen reality.

An artist’s portrayal of Christ’s crucifixion is an image, while a cross is a symbol of Christ’s sacrifice and man’s redemption.

The art of the earliest Christian ages was mainly in symbolic form.

There are two chief reasons for that. Firstly, there was a prohibition of images in Exodus 20:4-6, intended to protect the Hebrews from the idolatry of neighbouring nations.

For example, bread and fishes in a basket represented the Eucharist as foreshadowed in Christ’s feeding of the multitude (John 6).

Soon Christians began to picture episodes and persons from the Bible, such as Daniel in the lions’ den and the baptism of Christ.

Those who had been pagans were accustomed to portraits of their ancestors and remembered the flower-bedecked pictures of great men and heroes. It was natural for them to desire pictures of Christ and of the martyrs.

Christ was depicted especially as a shepherd and as a king and world ruler. An exact image of him was not available, since the apostles and other eyewitnesses had not described his physical appearance.

There were, however, some disagreements about the practice of picturing the God-Man and holy persons. Some people began to argue that honouring images was a form of idolatry. A long and complex struggle gradually developed.

In one of the early episodes of image-breaking, Pope Gregory the Great (590-604) explained and defended the Christian use of images in a letter to Bishop Serenus of Marseilles:

“We have been informed that thoughtless zeal has led you to smash pictures of saints and that you have excused yourself on the grounds that pictures should not be worshipped.

“For forbidding their worship, you deserve only praise, but for smashing them you must be censured. It is one thing to worship a painting, but another to be reminded by it of its subject. For what writing is to the literate, painting is to the uneducated.

“Paintings are employed in churches so that the illiterate can at least read by looking at the walls what they cannot read in books.”

The Catholic viewpoint was summarised in the 13th century by St Thomas Aquinas.

St Thomas taught that images instruct the uneducated, remind people of the mystery of the Incarnation and of the example of the saints, and inspire devotion.

When Passiontide begins, for example, the images in churches are veiled as a reminder that it is a period of mourning.

To show honour to images is not idolatry. It is not the statue or picture—the material thing itself—which is honoured, but the person who is represented.

External gestures of reverence must be an expression of interior attitudes of reverence, or they mean nothing at all. To show honour to Christ’s image is to adore Christ himself.

Veneration paid to saints and their images is called dulia, meaning the reverence and homage owed to servants of God.

Because of Mary’s pre-eminence, the honour paid to her and to images of her is called hyperdulia, a superior veneration.

Latria is the name given to the worship of God himself.

The Council of Trent (1543-63) defended the Catholic use and veneration of images:

“The images…of Christ, of the Virgin Mother of God, and of the other saints, are to be…kept in churches and due reverence and honour be paid to them; not because it is believed that there is any divinity or power in them or that anything may be asked from them or that any faith may be put in them as the heathen are wont to believe…but because the honour shown to them is referred to the prototypes which they represent; so that, through these images which we kiss and before which we bow with bared heads, we worship Christ and honour the saints whose likeness they display.”

The private and personal use of religious images should be guided by the doctrinal principles stated above for their public veneration. The honouring of statues and religious pictures in Christian homes and the use of medals bearing images is an ancient and still valid custom.

Church authorities exercise direction over the use and veneration of sacred images. They also judge the suitability of particular likenesses.

In 1628, Pope Urban VIII recommended that only the form of a dove or tongues of fire be used to represent the Paraclete, and in 1745 Pope Benedict XIV forbade the representation of the Holy Spirit in human form.

In more recent times, the image of a heart alone was forbidden as a representation of Christ for devotion to the Sacred Heart.

Some people think that it is wrong to use holy pictures, medals, crucifixes, rosaries and other sacramentals in our religious devotions.

According to these people, the Bible does not permit the use of images for worship; for to use them would amount to the worship of idols.

Certainly, only God should be adored or worshipped. Adoration belongs to God alone. This is the Catholic teaching.

But it is wrong to say that the Bible does not permit the making and the use of images as an aid for religious devotion. We shall see in Part 2 next week what the Scripture says about this.

The Catholic Church teaches that “images must not be prayed to because they can neither hear, see nor help us”. In other words, the images have no life.

Why then do we have images in the Church? They are used in the Church to help Christians to meditate on the lives of Our Lord and the saints which they represent.

Furthermore, images help to arouse a feeling of religious devotion and develop a spirit of contemplation.