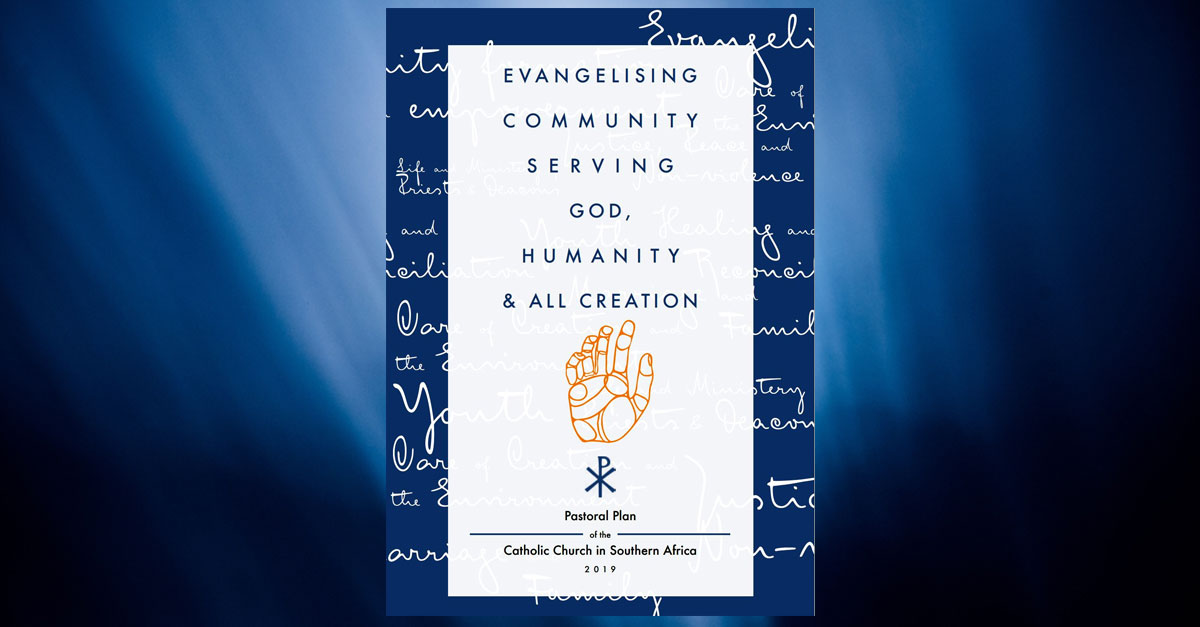 The cover of Southern Africa’s new pastoral plan, which will be launched on January 26.

When the new pastoral plan is launched on January 26, the Southern African Church will begin a new chapter in its history.

The theme of the new pastoral plan, which has taken many years of reflection and consultation, is “Evangelising Community, Serving God, Humanity and All Creation”.

It will be launched on January 26 at Regina Mundi Church in Moroka, Soweto.

A pastoral plan helps and guides the Church on every level to listen and respond to the leading of the Spirit, to enter into the Father’s plan for our Church and our world to be missionary disciples of Jesus in the present and to let the Spirit guide us into the future, according to Fr Patrick Rakeketsi CSS, SACBC associate secretary-general.

“To be pastoral is to look after others rather than self; look out for them before looking at your own wants; to look for the lost, bandage the wounded, carry the weak, assist the wayward, ensure food for the journey, avoid what is harmful, deal with danger, and provide for the future,” Fr Rakeketsi said.

“A pastoral plan for the Church does all this and more—within the Church community, and for the people, society and world around us,” he explained.

The new pastoral plan looks at three broad fields, which are then further divided into eight focal areas:

The new pastoral plan replaces the one which the SACBC adopted and began to implement in 1989, titled “Community Serving Humanity”.

In 2010 the bishops decided that the Catholic Church in Southern Africa needed to create a new pastoral plan. They asked the then Department of Evangelisation of the SACBC (now the Council of Evangelisation) to lead the process.

Before doing this, the bishops had identified eight priorities for the life and mission of the Church in Southern Africa.

Through a process of consultation in parishes and other organisations, there were two widespread consultations conducted by a team coordinated by Mgr Barney McAleer. These consultations gathered the concerns of all who responded. Six areas of mission emerged.

After much input, reflection, discussion and prayer, the bishops approved vision and mission statements for the pastoral plan.

At a meeting of the Council for Evangelisation in May 2017, a task team was appointed to study all the material and compose a first draft of the proposed new pastoral plan to be presented at the bishops’ August 2017 plenary session.

“This concept pastoral plan is the work of the drafting committee after considering the input of the bishops in their plenary of August 2017, and the comments of the Council for Evangelisation in the November 2017 and January 2018 meetings,” said Fr Rakeketsi.

It was authorised by the bishops in their January 2018 plenary to be released for study and comment by priests, religious and laity through the different organs of the dioceses,” said Fr Rakeketsi.

“Each Catholic and all Catholic communities within our conference area are, in their own context, invited to study, to discuss and decide how to implement the pastoral plan,”Fr Rakeketsi said.

He suggested that study sessions should be arranged in all parishes, groups and movements.

“Implementation of the plan will be ongoing, monitored and evaluated. The Council for Evangelisation will regularly review and evaluate how our pastoral plan is being received and implemented,” he said.

Fr Rakeketsi said that the SACBC has developed an implementation manual, which will be distributed to all dioceses.

“It is expected that each diocese will align its own pastoral activities with this new pastoral plan,” he said.

The Council for Evangelisation, which comprises the SACBC administrative board and all coordinating secretaries of the departments, “is the custodian of the pastoral plan”, Fr Rakeketsi said.

All are welcome to attend the January 26 launch at Regina Mundi church.