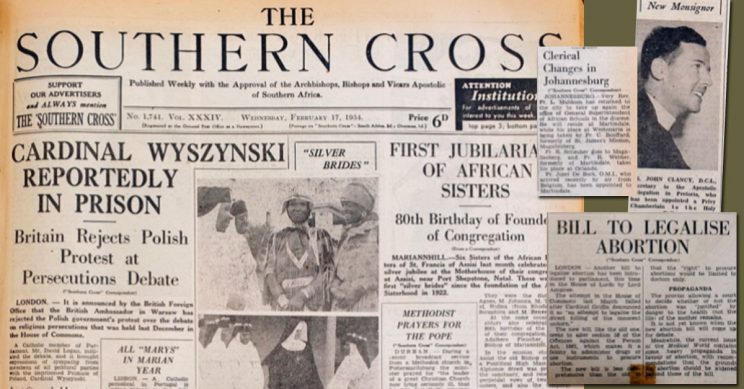 Poland’s Cardinal Stefan Wyszynski is reportedly being held in the notorious Lubianka prison in Warsaw where detainees are usually “softened up” by torture before “confessions” are extracted from them, which are then produced during the trial, Polish resistance movement members said. Poland’s communist government has rejected this, as well as charges by the British government that the regime was rooting out the Catholic Church “in the last stronghold of Roman Catholicism behind the Iron Curtain”. (The cardinal would be freed in 1956. He later reported witnessing the torture of detainees but was not tortured himself.)

A “small, vigorous, russett-cheeked nun in her late 60s”, Mother Lucina, is building a 30-bed hospital at Montebello in Natal. Mother Lucina is a familiar sight as she pours concrete to lay the foundation, or fits windows or door frames, or supervises her small staff of workers. The hospital will be known as Mater Misericordiae. (Now Montebello Hospital.)

Six Sisters of the African Daughters of St Francis of Assisi celebrated their silver jubilees at the motherhouse of the congregation at Port Shepstone. They were the first “Silver Brides” since the foundation of the congregation in 1922 by Bishop Adalbero Fleischer of Mariannhill.