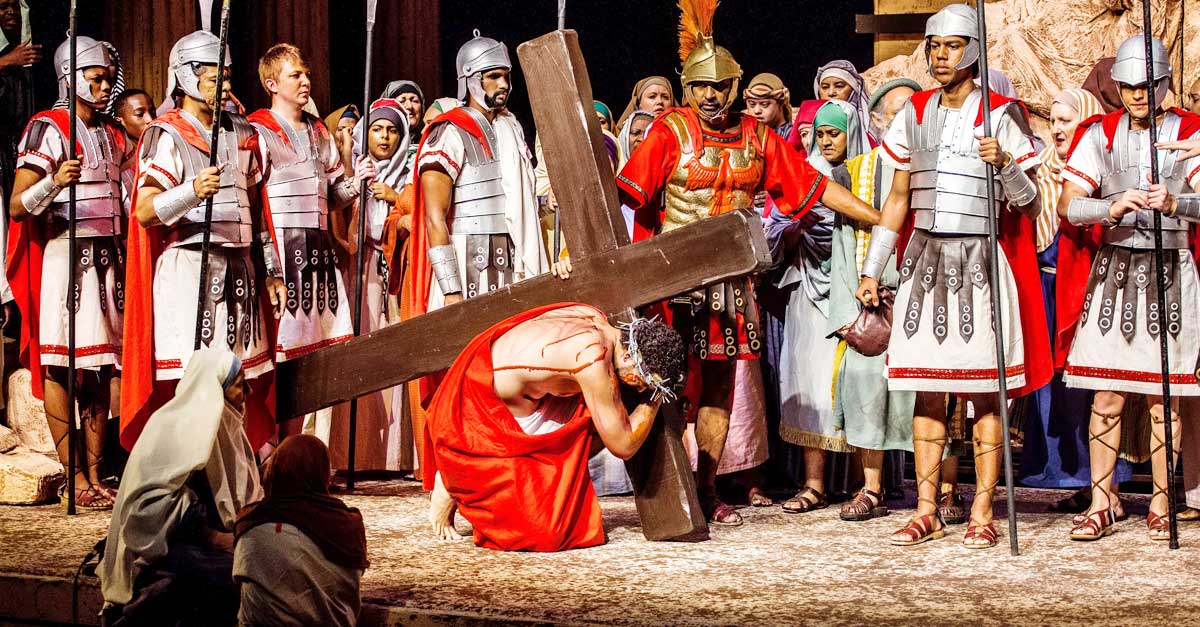 A scene from the 2015 Durban Passion Play, which will return this year from March 25 to April 12 at the Playhouse Drama Theatre in Durban. An abridged version of the famous Oberammergau Passion Play in Germany, it is directed this year by Dawn Haynes and Derek Griffin. (Photo courtesy Durban Catholic Players’ Guild)

The play re-enacts the story of the Passion of Christ, starting from Palm Sunday and ending with the Resurrection on Easter Sunday.

The first Durban Passion Play was staged under the guidance of Fr Noel Coughlan OMI in 1952 at the Greyville Racecourse, as a tribute to the Oblates of Mary Immaculate in South Africa, who were celebrating their order’s centenary that year.

It was so successful that Fr Coughlan travelled to Oberammergau in Bavaria to gain permission for the Durban version of the play to be staged every five years, based on the script of the world’s most famous passion play.

Durban’s Passion Play remains the only one in the world that is officially affiliated to Oberammergau.

This year, Dawn Haynes and Derek Griffin, who have been working on the script and training the actors, are directing the play.

The cast comprises an inter-denominational group of people across demographic and age groups.

Both agree that the hard work and hundreds of hours are well worth it.

“The cast of more than 100 have been rehearsing since September, and have shown dedication and commitment to making this a memorable and deeply spiritual experience for all. The youngest in the cast is only three years old while the oldest is 86,” Ms Haynes said.

“There are many families involved and some of our cast members have performed in more than eight plays. This means they have been dedicated for more than 40 years.”

This year will see two men share the role of Jesus: Rob Paul, who played Jesus in the 2000 play, and Dale Collings, a new cast member.

The Durban Catholic Players’ Guild will be performing the Durban Passion Play in the Playhouse Drama Theatre from March 25 to April 12.

One of the highlights is a special performance for the hearing impaired on Sunday, April 4 at 14:30, where the performance will be signed.

Tickets are available at www.webtickets.co.za and block bookings are available. The whole theatre can be booked for fundraising events. For details contact Dawn Haynes at dawnhaynes013@gmail.com