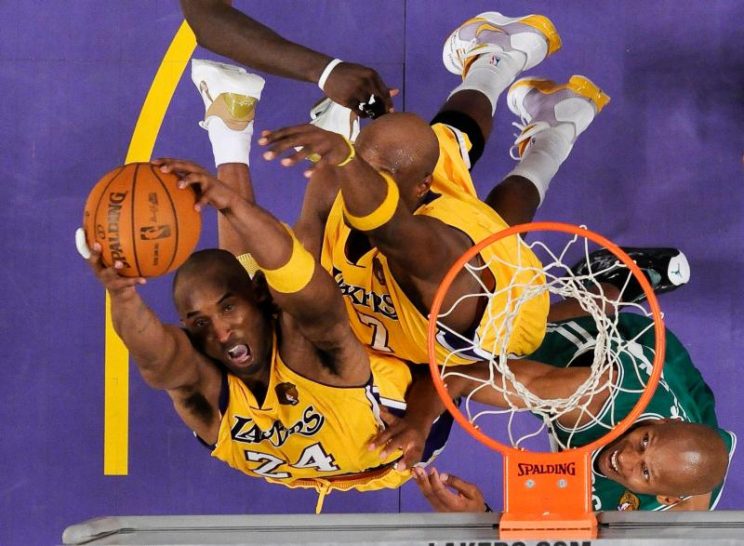 Los Angeles Lakers guard Kobe Bryant grabs a rebound during a game against the Boston Celtics. Bryant and his daughter Gianna, 13, were among nine people killed Jan. 26, 2020, in a helicopter crash in Calabasas, California. The retired NBA star and his daughter were Catholic. (CNS photo/Robert Hanashiro-USA TODAY Sports via Reuters)

The deaths of young and talented celebrities invariably shock us, more so when their lives are taken in tragic events.

So it was recently when legendary US basketball star Kobe Bryant perished at the age of 41 in a helicopter crash, which also killed his teenage daughter Gianna and seven others. May their souls rest in peace.
Mr Bryant’s fame extended around the world, and well beyond the world of basketball. So the public grief that met his tragic demise was extensive.

Catholics, too, found cause to mourn the star, since he was a practising Catholic who talked openly about his faith. According to reports, he and his daughter had attended Mass just a few hours before their deaths.

Amid the widespread grieving, questions arose about credible rape allegations levelled against Mr Bryant in 2003.
These allegations never went to trial, and Mr Bryant and his accuser reached an out-of-court settlement (after a year of the young woman being subjected to systematic character assassinations by Mr Bryant’s lawyers). At the same time of the settlement, Mr Bryant acknowledged that, after due reflection, he could see how his sexual encounter with the 19-year-old woman might not have met the requirements for consensual sex. In doing so, he went as far to incriminate himself as his lawyers would allow.

At the same time of the settlement, Mr Bryant acknowledged that, after due reflection, he could see how his sexual encounter with the 19-year-old woman might not have met the requirements for consensual sex. In doing so, he went as far to incriminate himself as his lawyers would allow.

He deserves some respect for that. Very few men in his position have taken such a measure of responsibility for their commission of sexual violence.

Still, after his death, many people saw it as disrespectful that Mr Bryant’s rape case should be mentioned. The Washington Post even suspended a journalist for linking it to a 2016 story about the case on her personal Twitter account (she also received death threats from admirers of the late star).

Many secular newspapers omitted or downplayed the rape allegations—one newspaper, The Los Angeles Times, framed it within an alpha-male feud between Mr Bryant and fellow basketball star Shaquille O’Neal.

In the show of misplaced hagiographic respect, Mr Bryant’s transgression and his victim were made invisible by a deliberate amnesia.

Of course it is difficult to be confronted by the moments of darkness in the life of somebody beloved who has died.

Few of us have life stories that are either all good or all bad — most people have the capacity for both virtue and sin. And, importantly, we all have the facility for redemption.
This is why Catholic media, unlike their secular counterparts, gave Mr Bryant’s rape case due prominence. As they did so, these Catholic media had no intent to scandalise or to condemn Mr Bryant for his contemptible actions. Rather, the focus was on how the basketball star had turned his life around by drawing inspiration from the Catholic faith with which he had grown up.

As they did so, these Catholic media had no intent to scandalise or to condemn Mr Bryant for his contemptible actions. Rather, the focus was on how the basketball star had turned his life around by drawing inspiration from the Catholic faith with which he had grown up.

In that way, the rape case was not a story of infinite disgrace — though every act of sexual violence is, of course, entirely loathsome — but a nadir that became a story of metanoia: the beginning of a change of heart, of repentance and conversion through faith.

By shining a light on Mr Bryant’s most despicable moment, we observe how a man who committed a sickening act evidently transformed himself through Christ.

This is a teaching moment, an affirmation that with God’s grace, nobody needs to remain trapped in the vices of wickedness. Even from the lowest acts of iniquity — and sexual violence belongs in that category— there is a way back, with faith in God’s grace and through conversion, repentance and reparation.

With God, everybody who genuinely seeks and works for it deserves a second chance for repentance and transformation, millionaire celebrity or prison inmate alike. God closes the door on nobody who approaches him with authentic repentance.

Like the dissolute behaviour of St Augustine or the persecution of Christians by Saul before he became Paul are an important part of their stories of repentance and conversion, so will the rape case and the metanoia that followed it be the story of Kobe Bryant’s life—a life which gives a salutary example that with Christ, there is always a way back from even the worst of sins.