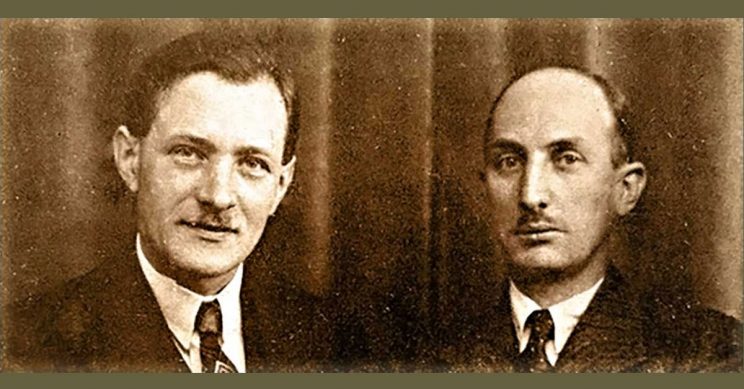 Among the many Catholics who died at the hands of the Nazis were two of the founders of the Young Christian Workers movement. STEFAN GIGACZ tells their story.

This year the world commemorates the liberation of Nazi concentration camps.

At the end of January we marked the liberation by Soviet troops of the infamous camp at Auschwitz-Birkenau, where so many people perished during the Second World War.

Sadly, this was not the end for all camps. Many others would continue to die in other camps over the next few months, before the surrender by Nazi Germany in May 1945.

Among these victims were Fernand Tonnet and Paul Garcet, two members of the “founder trio” in Belgium of the Young Christian Workers movement.

They died in the Nazi death camp at Dachau, near Munich, in January and February 1945.

Born in 1894, Fernand Tonnet met young Fr Joseph Cardijn—who much later would become a cardinal—within weeks of the latter’s appointment as a curate in the parish of Our Lady of Laeken near Brussels at Easter 1912.

He began immediately to work with his new mentor in the field of formation.

The outbreak of the First World War in August 1914 interrupted this work when Tonnet was called to arms after Germany’s invasion of Belgium.

Tonnet survived the trenches but suffered lasting damage from the effects of poison gas.

Finally in 1919 he was able to return to Laeken where he soon teamed up again with Fr Cardijn and two other young men, Paul Garcet and Jacques Meert, to launch the Jeunesse Syndicaliste (Young Trade Unionists), forerunner of the Jeunesse Ouvrière Chrétienne, or Young Christian Workers (YCW).

For the next six years the dynamic group worked together to develop the emerging movement, eventually gaining the approval of Pope Pius XI for their initiative.

This in turn led to an explosion of growth of the YCW, with 400 new teams launched in 1925 alone.

Elected as national president at the first national congress in 1925, Tonnet continued to play a leading role. In 1927, he travelled to France to assist in the launch of the movement in Paris and Lille, where he was welcomed as the first “international president” of the emerging movement.

As the movement continued to grow, he helped organise many of its major events, including the first pilgrimage to Rome in 1929.

He also had a particular talent and interest in publishing and was instrumental in the launch of the movement’s colour magazine, JOC.

Even more importantly, Tonnet played a key role in forming a whole generation of young leaders of the 1920s and ’30s—a period that has come to be recognised as a golden age of the YCW, a movement that would come to South Africa in the 1950s, under the leadership of the recently late Fr Albert Danker OMI.

In 1934, now aged 40, he relinquished his post as president and went to work with the Christian Trade Union, where he developed a formidable reputation as an organiser and advocate for worker rights.

In 1938, he changed tack to join the Action Catholique des Hommes (Men’s Catholic Action) movement, where he again made excellent use of his talent in developing publications and resources for local teams and leaders. There he remained until his arrest in 1943.

Born in 1901, Paul Garcet first came into contact with Fr Cardijn around 1915 via the Pius X Eucharistic League in the parish.

Soon after he also joined the local “patronage”, or parish youth club, where he got to know Tonnet albeit, given their age difference, from afar.

By 1919, the war was over and Garcet was 18. He now teamed up with the recently returned Tonnet and the young metalworker Jacques Meert to work on establishing the Young Trade Unionists.

Soon after, Fr Cardijn found him a job as an accountant with the Christian Trade Union Federation in Brussels, enabling him to devote much energy and time to the promotion of the new movement.

At the first YCW congress in 1925, Garcet was elected national treasurer. Soon after, together with Tonnet and Meert, he became a fulltime worker for the movement.

Later, Fr Cardijn would describe them as the “founder trio” of the movement, with “Fernand, the head; Paul, the heart; and Jacques, the hands”. Others added Fr Cardijn’s name to the list as the “fire” or the “soul” of the team.

As treasurer, Garcet successfully tackled the difficult task of ensuring that the movement met its budget needs—always a challenge but particularly in those early years of rapid growth.

During this period, he was also responsible for YCW’s vocational orientation programme for young people.

In 1935, he became administrative director of La Cité Nouvelle, a progressive Christian magazine while he also worked to develop a Christian Worker League.

Meanwhile, he continued to collaborate with Tonnet on the development of a network of former YCW leaders.

Sadly, much of this work was interrupted by the outbreak of World War II in September 1939.

In 1940, Belgium was once again occupied by invading German forces. Yet despite dangers, Tonnet and Garcet continued their apostolic work.

Although they were not formal members of the underground resistance, they nevertheless took many risks to provide aid to those in need. Inevitably, their actions came under scrutiny.

Paul Garcet was the first to be arrested, at the beginning of June 1943, for allegedly helping to provide lodging for a parachutist member of the Resistance.

Tonnet, who had telephoned Paul to ask his assistance for the task, was quick to blame himself for the arrest.

Several days later, Tonnet was himself interrogated by the Gestapo, Germany’s secret police, and accused of having failed to report the location of the parachutist.

At the beginning of August, the Gestapo returned again on several occasions, seeking to arrest him. Fortunately, he was absent each time, but it was clear that his days of freedom were numbered.

At this point, Tonnet could have sought to take refuge. However, fearing that others would be blamed if he disappeared, Tonnet refused to leave, despite the entreaties of his friends and colleagues.

Finally, on August 10, the police returned and arrested him. He was imprisoned at the Saint Gilles prison, where Mgr Cardijn had also been interned, and where Garcet and other colleagues were also being held.

At the end of August 1943, both Tonnet and Garcet were transferred to the death camp at Esterwegen in north-western Germany.

Here the task of dehumanising them began. They had their heads shaved and their clothes taken away, and were given numbers by which they would be identified.

They were both classified among the most dangerous prisoners with the initials “N.N.”, which stood for “Nacht und Nebel” (literally “night and fog”), signalling that all trace of their existence was to disappear.

As Marguerite Fiévez wrote in her biography of Tonnet, it was a kind of “death sentence without the name”, turning them into “living dead”. Together with them were a number of other former YCW leaders and chaplains.

Here they were put to work sorting cartridges and recycling materials for use by the Nazi war machine. In response, they both looked for ways to slow down and impede the work.

Doing the least work possible, they both sought to come to the aid of other prisoners, offering them spiritual and emotional support in their distress.

Tonnet and Garcet remained at Esterwegen for seven months until on March 20, 1944 they and others were moved to another death camp, Flossenbürg at Bayreuth.

There they forced to do hard labour. In these conditions, their health slowly began to decline. On May 21, Tonnet recorded that he now weighed a mere 51,5kg.

At the end of summer 1944, this labour ended and they were both henceforth confined to their cells.

Now Tonnet and Garcet were again separated from one another. Nevertheless, they both continued to provide moral and spiritual support to their fellow prisoners.

Finally, on November 29, 1944, the Flossenbürg camp was emptied and many prisoners transferred to the sinister camp at Dachau, about  16 km northwest of Munich, the concentration camp where German Christian opponents of the regime were mostly incarcerated.

Here around 40 men were lodged together in three rooms. By now, most were already too feeble to work and spent the days in bed.

Tonnet was in a greatly weakened state. Nevertheless, he continued to gain the admiration of his colleagues.

“The impression I had of Fernand Tonnet at Dachau perfectly confirmed the impression I already had of him,” one former YCW chaplain and camp survivor, Fr Mauroy, later wrote.

“He was a layman extremely close to God, with a great delicacy of conscience. He was truly a fervent devotee of sanctity,” Fr Mauroy wrote.

“However, you had to discover this from the inside, without looking at the outside of a man who had already lost all the dash and dynamism he once had,” the priest concluded.

“I saw him,” recalled Jesuit theologian Fr Léon de Coninck, who later wrote of his experience in a book, Dachau, bagne pour prêtres (Dachau: Prison for priests). “He was in a terrible state, lacking clothes, worn out with fatigue and dying of hunger.”

But when food packages arrived from the Red Cross and there was one too few for the number of prisoners, Tonnet gave up his own parcel in favour of another prisoner. And when more parcels arrived later, he shared this with others.

Together again for the last time, Tonnet and Garcet continued to help organise prayer and even covert Mass services.

But this did not last long. The month of January 1945 was extremely cold. Garcet had come to the end.

By January 20, he was already in a close to comatose state. On January 23, he finally succumbed with Tonnet at his side.

Tonnet’s own demise was also now only a week away as he continued to weaken to the point he could no longer eat.

“That’s it!” he told his companions on February 1. “I can’t continue. I no longer need anything!”

By the morning of February 2, he too was dead.

Less than three months later, Dachau too was liberated, this time by American forces. But it was too late to save the YCW co-founders.

In 1965, just after he had become a cardinal and as Vatican II neared its conclusion, he gave his backing to calls for their beatification.

“It was not primarily their arrest, stay and martyrdom in the Dachau camp that set them apart for the heroism of holiness,” Cardinal Cardijn said at the time.

“Many others have displayed a similar sublime heroism,” he noted.

“No, their whole adolescence and youth was marked by the faith and an apostolic mission, by daily recourse to the most authentic sources of holiness and apostolate, by an unparalleled charity and renouncement, by goodness, gentleness and perseverance in the service of the humblest and most abandoned,” he said.

The fact that Vatican II endorsed the lay vocation in the world that Fernand Tonnet and Paul Garcet modelled and embodied is perhaps the greatest tribute to their example, which deserves and needs to be recognised.

Stefan Gigacz is the secretary of the Australian Cardijn Institute and an honorary postdoctoral associate at the University of Divinity, Australia.

Murder Of Jesuits Was Marked With Horror, But Inspired Defence Of The Poor
Share