What SA Bishops And Ramaphosa Discussed 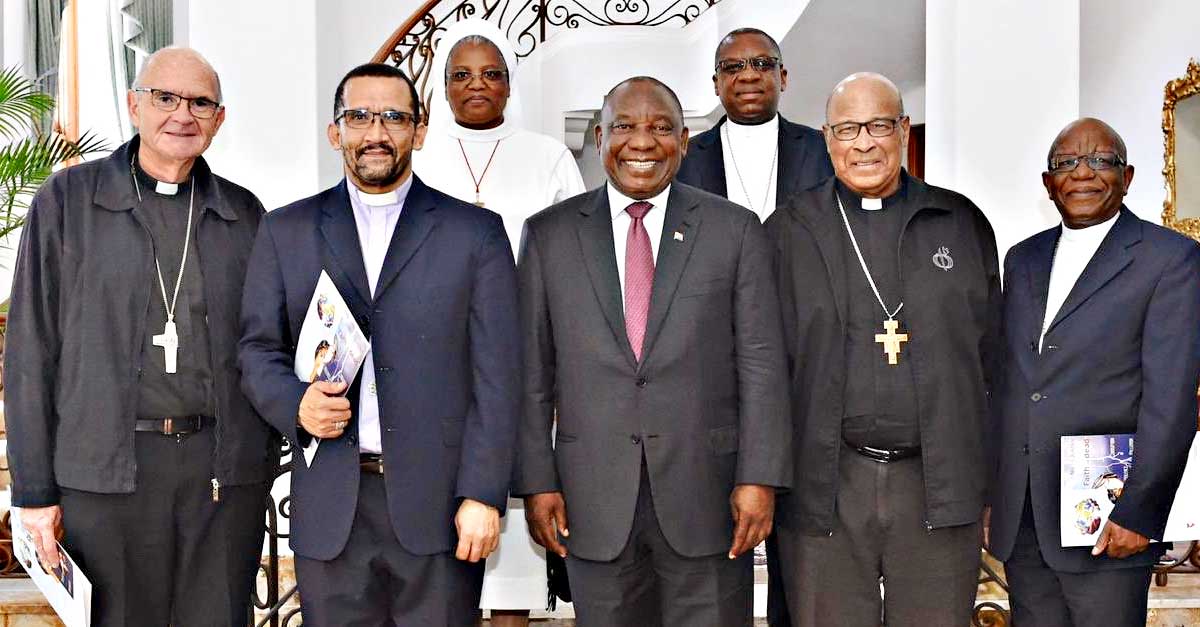 President Cyril Ramaphosa has agreed with Catholic Church leaders that things need to improve in South Africa, and has asked that the Church work with him to resolve them.

“Both the president and the Church realise that at this moment South Africa faces a nationwide challenge. While there is a crisis in the economy it is also clear that the citizens need to be offered by the Church a foundation in spiritual values such as an awareness of the priority of the common good rather than seeking personal entitlement,” Bishop Sipuka explained.

“We informed the president of the Church’s new national Pastoral Plan, engaging all committed Catholics to exercise their faith and competencies at the service of the whole national community,” he said.

The president and the bishops shared their concerns regarding unemployment, homelessness, migration, youth, and integrity and honesty in all areas of public administration and delivery.

According to Bishop Sipuka, the meeting, which was requested by the bishops, was warm and friendly.

“We assured [the president] that the Church is committed to working with all people of goodwill towards the renewal of South African society,” the bishop said.

Mr Ramaphosa expressed his appreciation for the Church’s work. He was very aware of the efforts of the Catholic Church over the centuries to serve the nation, especially the poor, in worship, social care, and education, and also in its huge contribution in the face of HIV/Aids.

According to SACBC spokesman Archbishop William Slattery, the Church is, after the government, the greatest contributor in addressing the HIV/Aids crisis.

“There are 8 million people in the country who are suffering from HIV/Aids, and the Catholic Church at one stage was doing 25-27% of the response to that,” the archbishop explained.

“The president also expressed his appreciation for what the Church is doing in the area of education, as we have 380 Catholic schools,” he said.

Archbishop Slattery also noted that the Catholic Church “opened all of the first rural clinics, and many of the great hospitals were started once by the Church”.

Another important concern for the Church was homelessness.

“Homelessness is a huge problem because of the number of people coming into the country. We have such high unemployment ourselves, so how can we deal with that. The Church is worried about it but appreciates the difficulty of the government in responding to that,” Archbishop Slattery noted.

“There was also some conversation about unemployment and especially the youth, and also ways in which we can strengthen marriage and family in the country,” he said.

Pastoral Letter On Violence Against Women, Girls And Children