How Martyrs’ Blood Fed a Church 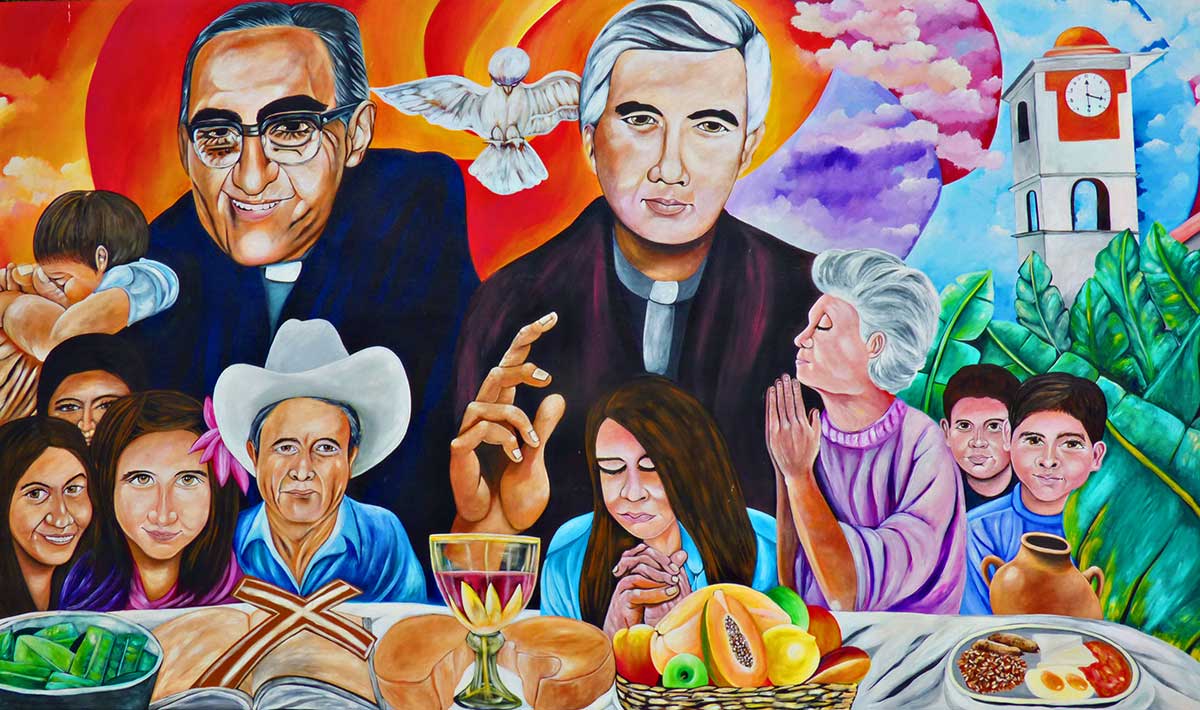 A mural in El Paisnal, El Salvador, depicts the martyrs St Oscar Romero (left) and Fr Rutilio Grande SJ, surrounded by rural people of the community. Fr Grande served from 1972 until his murder on March 12, 1977. Archbishop Romero, who was himself murdered 40 years ago this month, experienced a conversion through the Jesuit’s assassination. They and the other martyrs of El Salvador are remembered in a Jubilee Year which begins on March 12. (Photo: Rhina Guidos/CNS)

Marking the 40th anniversary of the murder of St Oscar Romero, the Church in El Salvador is launching a Jubilee Year for its martyrs. Fr Valentine Iheanacho MSP reflects on the strange ways of martyrdom.

This month marks the 40th anniversary of the violent end of St Oscar Romero.

The late archbishop of San Salvador, popularly known as Monseñor Romero, was assassinated on Monday, March 24, 1980 while celebrating Mass for the repose of Doña Sara de Pinto in the chapel of Hospitalito where he lived.

With threats to his life and person, Archbishop Romero had been advised to flee.

In December 1978, Archbishop Antonio Quarracino—Pope Francis’ predecessor as archbishop of Buenos Aires—voiced his concerns about the danger of a violent death the archbishop of San Salvador was facing.  Archbishop Romero assured his brother bishop: “A pastor does not go away; he must stay to the end with his own.”

From time immemorial, death has never been far from the horizon of those who stand up for what is right and just, especially when they speak the truth to those in the corridors of power.

For Archbishop Romero and the martyrs of El Salvador, whose memory and courage are being commemorated this month by their country men and women, death—and violent death at that—was always going to be the ultimate price.

Archbishop Romero feared not so much death but that others might be killed with him: “I only hope that when they kill me, they do not kill many of us.”

Unfortunately, his wish was not realised. His funeral on March 30 was left unfinished due to a bomb explosion that killed several of his beloved campesinos (peasants).

They had gathered at the Plaza Barrios in front of the cathedral to pay their final respects to their martyred shepherd and defender.

As in life so too in death. Their tragic paths crossed once again with those of their prophet and pastor, who a few days earlier had preceded them on the sanguineous road of martyrdom.

It was Tertullian who said: “The blood of the martyrs is the seed of the Church.” In many ways, that aphorism is descriptive of the many martyrs who fertilised the Salvadoran Church in its recent history.

Its landscape of martyrdom is illuminated by an array of martyrs that included priests, religious, catechists, lay leaders, simple Christians and children.

It was provoked by the systematic strategy of the repressive Salvadoran oligarchy whose aim was the total elimination of all those on the side of the poor and oppressed of the country.

The proto-martyr in the long and winding road of that collective martyrdom of the oppressed and violated poor of El Salvador was Jesuit Father Rutilio Grande, whose martyrdom has been recognised by Pope Francis.

His martyrdom in the late afternoon of March 12, 1977 led the local Church towards the part of pain, suffering and deprivation. It unleashed an avalanche of repressions and persecutions from the Leviathan Salvadoran state.

It is thoughtful of El Salvador’s bishop to kick off their Jubilee Year of the Martyrs on March 12, the 43rd anniversary of Fr Grande’s martyrdom.

In his death, Fr Grande unwittingly opened the door of martyrdom to others who, like him, were embroiled in the struggle for justice and for a better society for the majority of their people.

The 18 priests who were murdered after Fr Grande between 1977 to 1989 were in one way or the other connected to him.

He was their formator, mentor and friend in the seminary of San José de la Montanã. He inspired his seminarians not to be elitist in their pastoral ministry after their priestly ordination.

Fr Grande impressed it upon students to immerse themselves in the life of their ecclesial communities.

It was those communities, especially the ones at the base of the church and at the margins of the society, that incurred the wrath of a conscienceless and ravaging state with its military and paramilitary death squads.

The Jesuit was the trailblazer whose words and simple lifestyle troubled the rich and mighty of El Salvador who appropriated the fertile land of the country to themselves while the majority of their country people were left behind in destitution and misery.

It was that harsh reality, woven together within that diabolic web of power, wealth and oppression which Pope Paul VI spoke about in Columbia in 1968: “That your ears and hearts be sensitive to the voices of those who ask for bread, concern, and justice.”

Fr Grande and his two peasant friends met their cruel deaths because of his work to rouse the consciences of the oppressors and to shake off their lamentable indifference in the face of abject poverty everywhere in El Salvador. 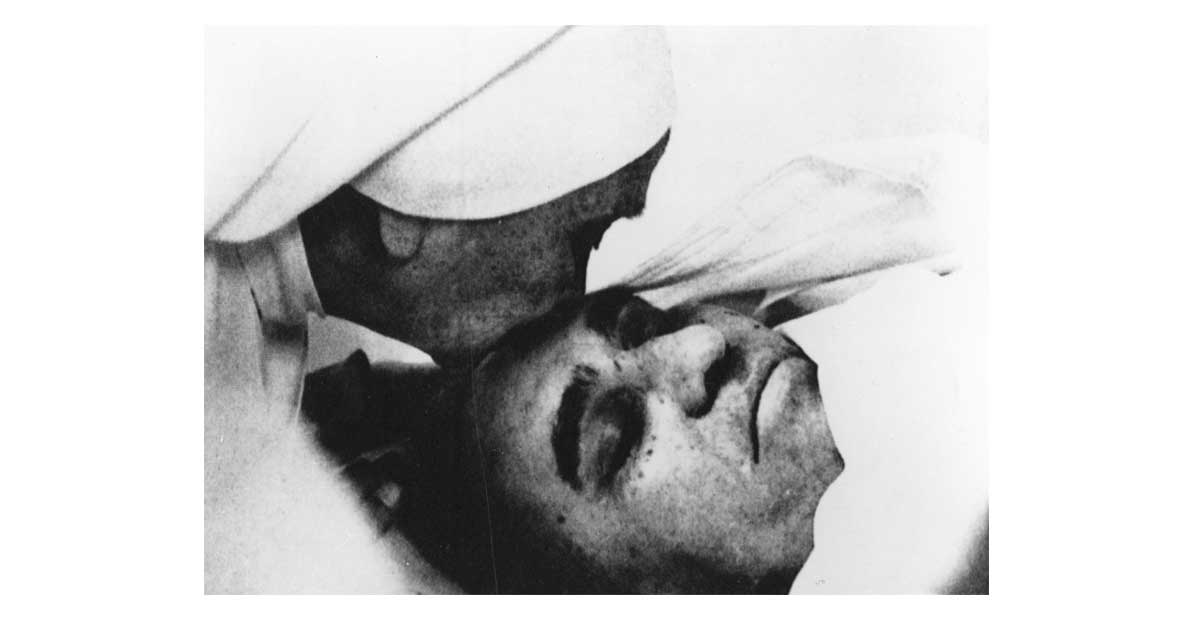 A nun kisses the forehead of Archbishop Oscar Romero after he was assassinated while he celebrated Mass in a chapel on March 24, 1980.

Unfortunately some members of the Catholic hierarchy in El Salvador were lukewarm, and in a few instances even hostile, to Fr Grande and his army of prophets of social justice.

At the instigation of some members of the Salvadoran bishops’ conference, the Jesuits were expelled from the San José de la Montanã seminary, which was then under their administration.

The ultraconservative Bishop Oscar Romero was instrumental in the expulsion of the Jesuits from the national seminary. How mysterious the hand of the omnipotent God in human affairs!

As was later paraphrased by Rev Martin Luther King Jr: “The arc of the moral universe is long, but it bends towards justice.” The expulsion of Fr Grande and his fellow Jesuits from the seminary, partly due to Archbishop Romero, led the Jesuit to dedicate himself wholeheartedly to pastoral work among the poor and oppresseds.

It was the injustice of the brutal death of Fr Grande that led to the conversion of Archbishop Romero to become a champion of justice and equality.

It was for the same cause that Fr Grande had lived and died, and Archbishop Romero never shied away from recognising the “Grande-effect” on him and his subsequent episcopal ministry in San Salvador as the archbishop of the capital city.

“When I looked at Rutilio lying there dead, I thought: If they killed him for doing what he did, then I too have to walk the same path.”

The point of conversion

That was the game-changer for Archbishop Romero. It transformed him from being an ecclesiastical career prelate into a rabble-rouser and a social gadfly for justice. It made him the voice of the voiceless and the conscience of his nation.

Effectively, Archbishop Romero became the roaring lion at the pulpit in his cathedral from where his was preaching. The last homily on March 23, 1980 sealed his fate.

On that faithful Sunday, Archbishop Romero gave vent to his anger about the incessant repressions visited upon his simple and harassed flock by the nefarious and odious regime:

As far as Archbishop Romero and his fellow Salvadoran martyrs were concerned, the enormity of the matter at stake at the time did not give them the leisure of preserving the niceties of Vatican diplomacy, which in some instances, may be miles away from the concrete reality of the people of God.

The Salvadoran martyrs understood their mission as being intrinsically connected with the Christian faith and the concrete lives of their people.

In order for the poor to live a life of dignity, Archbishop Romero often recalled the words of Pope Paul VI to underscore this basic fact about the desired change in the society:

“To change structures without changing the hearts of men is simply to place new structures at the service of new sins. What is needed is a new man. And in order to have a new continent, it is not enough to have a change of structure without a change of hearts.”

As if to perform a mea culpa for their predecessors who disowned Archbishop Romero and the other martyrs, the bishops gave the motif for the Jubilee Year of the Martyrs: “The martyrs gave their lives and accompany us on our pilgrimage of faith. We want to hear their voice and at the same time, we want to echo that voice.”

A lot still remains to be done in El Salvador. It ranks as the most violent country in the Americas and also one of the poorest countries in the world.

The Salvadoran civil war may have ended but gang violence has replaced military and guerilla guns. The economic underdevelopment of the populace today is not all that different from what it was in the days of the Salvadoran martyrs.

Hence, the current bishops of El Salvador must not allow the thundering voice of prophecy to be silenced.

The same applies to bishops in other countries of Latin America as well as in Africa and elsewhere.

May all those concerned about social justice heed these words of Archbishop Oscar Romero: “If martyrdom be my fate, may my blood become a seed of liberty and sign that hope may soon become a reality. A bishop will die, but the Church of God, which is the people, will never perish.”

Fr Iheanacho is of the Department of Historical and Constructive Theology at the University of the Free State, Bloemfontein