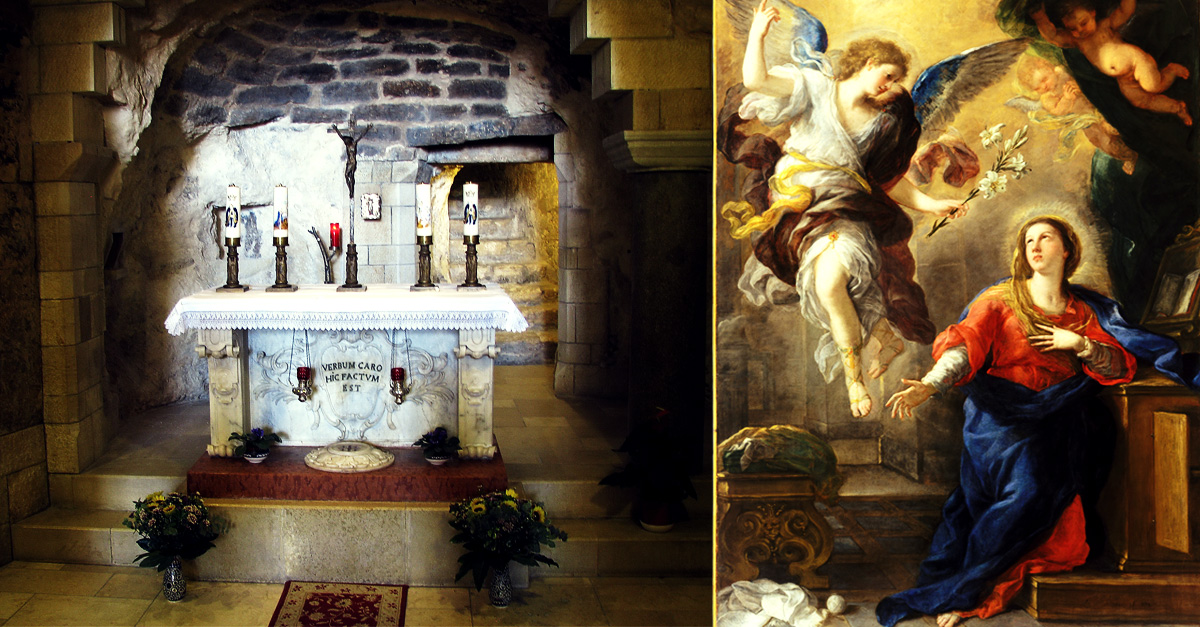 (Left) Mary’s grotto in the crypt of Nazareth’s basilica of the Annunciation. It is here that tradition places the appearance of the angel Gabriel to the Virgin Mary, and thus the place where the first two lines of the Rosary have their origin. (Right) The Annunciation as depicted in 1672 by Italian painter Luca Giordano. The feast of the Annunciation is on March 25.

On March 25 we mark the feast of the Annunciation, the moment when the story of the Incarnation begins. PROF EMMANUEL OGUNU explains what lessons we can learn from that event.

The feast of the Annunciation marks the announcement  by the Archangel Gabriel to Mary in Nazareth that she would be the Mother of God (Lk 1:26-38).

At that very instant, the Word became flesh in Mary’s womb.

March 25 is the date of the feast unless that date falls on a Sunday in Lent, at any time during Holy Week, or at any time in the octave of Easter (from Easter Sunday through Divine Mercy Sunday, the Sunday after Easter).

In that case, the celebration is transferred either to the following Monday or to the Monday after Divine Mercy Sunday.

The date of March 25 was known by ancient tradition to have been the day of the Annunciation, and the feast itself dates back at least to the 5th century.

Originally it was a feast of Our Lord, but now it is celebrated as a Marian feast.

March 25 may rightly be called the feast of the Incarnation, for on that day we commemorate the central truth of our Catholic faith: the Incarnation of our Lord.

“For us men and for our salvation, the Eternal Son of God became flesh in the womb of the Virgin Mary and made his dwelling place among us” (Jn 1:14).

The Annunciation is one of the most mysterious and important events in the history of the world. It is described beautifully in the Gospel of Luke, with all the simplicity and power so typical of God’s Word:

“The angel Gabriel was sent from God to a town of Galilee named Nazareth, to a virgin betrothed to a man named Joseph, of the house of David. The virgin’s name was Mary. Upon arriving, the angel said to her: ‘Rejoice, O highly favoured daughter! The Lord is with you. Blessed are you among women… You have found favour with God. You shall conceive and bear a son and give him the name Jesus. Great will be his dignity and he will be called Son of the Most High…’.

“Mary said to the angel, ‘How can this be, since I do not know a man?’ The angel answered her, ‘The Holy Spirit will come upon you and the power of the Most High will overshadow you; hence the holy offspring to be born will be called Son of God’” (Lk 1:26-37).

The Gospel of Matthew also affirms the virginal conception (Mt 1:12-25).

Then an angelic messenger tells St Joseph: “Have no fear about taking Mary as your wife. It is by the Holy Spirit that she has conceived this child” (Mt. 1:20-21).

Most notable in the Annunciation account is the response of the young girl who was the recipient of God’s special vocation of Mother of the Messiah. “I am the servant of the Lord. Let it be done to me as you say” (Lk 1:38).

Mary chose to be servant of the Lord and to bring the Saviour into the world. It proved to be an heroic service of love, for with her Son, she walked the Way of the Cross.

An often-forgotten Old Testament verse may well have inspired and assailed the young Mary: “When you come to serve the Lord, prepare yourself for trials. Be sincere of heart and steadfast, undisturbed in time of adversity… For in fire gold is tested, and worthy men in the crucible of humiliation” (Sirach 2:1-5).

What the feast teaches us

The feast of the Annunciation teaches us several truths that are worthy of our reflection.

This truth is a central theme of the teaching of the Catholic Church. It is also the basis of the sacramental life of the Church.

The kind of new life that Jesus came to give us is a sharing in divine life which we had lost through the first or original sin of Adam and Eve. Now by Jesus’ death, it would be restored and the sacraments would be the means of receiving it and growing in it.

Secondly, the Annunciation teaches us that God requires our cooperation to bring about the salvific deeds he intends to accomplish.

This truth is also part of the profound message of Fatima when our Blessed Mother asks all her children to pray and fast so that souls may be spared from the fires of hell.

The understanding is that many will not receive graces for salvation unless others cooperate with God’s grace to obtain them.

Thirdly, the feast of the Annunciation teaches us that human life begins at conception.

The Latin text of the Creed states this very fact when it says, “et incarnatus est de Spiritu Sancto ex Maria Virgine, et homo factus est”, which means “and he became flesh by the power of the Holy Spirit through the Virgin Mary and became man”.

This is also the third declaration of the Angelus when one says, “And the Word became flesh”, with the response, “And dwelt among us”.

At this moment many genuflect to show adoration of the Incarnate Word of God. This truth also reminds us why the Catholic Church so strongly condemns abortion from the moment of conception.

Finally, the feast of the Annunciation reminds us of the remarkable role of Mary in the work of salvation.

Mary was the one called by God to uniquely participate in the work of salvation so that the Son of God could become man and, by his death, redeem our world.

Mary is the New Eve because as the sinless Mother of God, made so by Christ her Son, she becomes the Mother of all the truly living, those who accept and live in the very life of God.

So as we celebrate the feast of the Annunciation, let us rejoice in all the truths that are found in this great mystery.

Let us begin to pray the Angelus daily in our families to commemorate our God becoming man by means of Mary.

Let us rejoice that the Son of God truly came to dwell with his people by becoming man and opening the doors of heaven for us to enter.