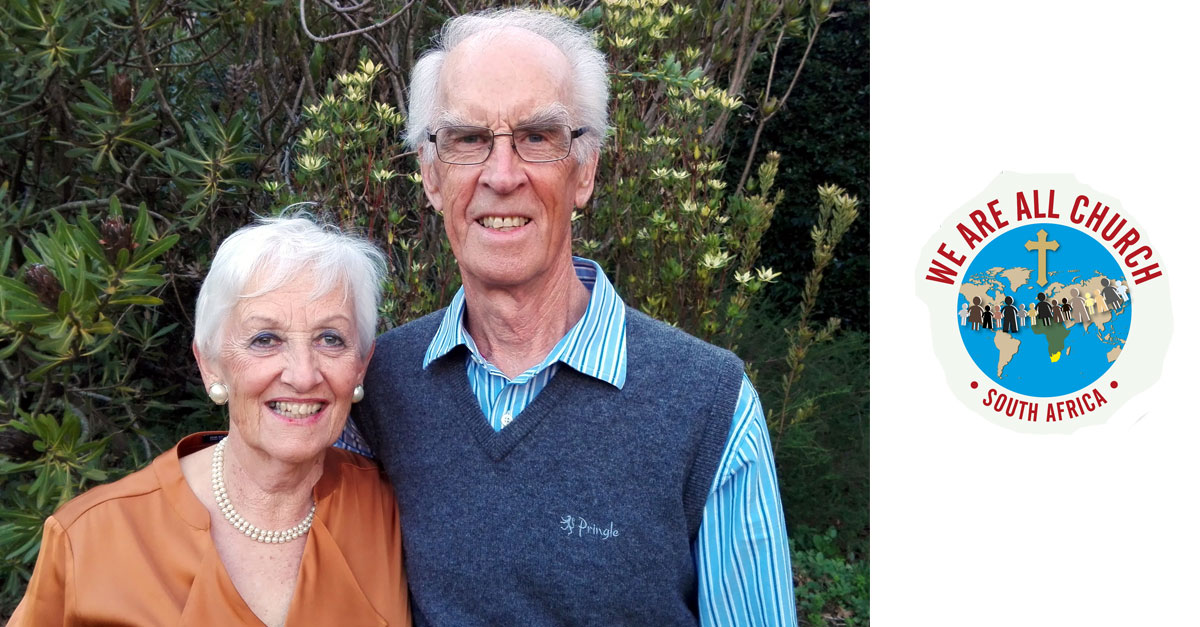 Dr Brian Robertson and his wife Francoise who in 2010 spearheaded the founding of the We Are All Church SA movement, which sees as its aim to foster dialogue in implementing the teachings of the Second Vatican Council. The WAACSA logo is pictured right.

This year, the We Are All Church SA (WAACSA) movement will turn ten years old. GÜNTHER SIMMERMACHER spoke with co-founder Prof Brian Robertson.

The We Are All Church SA movement sees itself as a facilitator of dialogue which aims at implementing the teachings and vision of the Second Vatican Council.

Originally set up as the South African chapter of the progressive We Are Church movement, the founders decided early on to place a distance between themselves and the international movement, adopting a similar but different name: We Are All Church.

It sees as its mission “to help strengthen and support the mission of the Church, especially in South Africa and in our local churches, through promoting dialogue and empowering lay people in particular to take up more responsible and informed roles as evangelising Christians”.

WAACSA currently has branches in Johannesburg, Cape Town and KwaZulu-Natal.

Many noted priests, religious and lay Catholics, as well as speakers from other faith bodies, have addressed WAACSA talks

Bishop Sylvester David, auxiliary in Cape Town, is scheduled to deliver a talk on March 7 (see www.weareallchurch.co.za for details).

WAACSA also hosts seminars on subjects such as Scripture, and book launches.

Dr Brian Robertson, who with his wife Francoise initiated what would become WAACSA, is an emeritus professor in psychiatry and mental health.

What was behind the founding of WAACSA?

Prof Robertson: In 2010 my wife and I sent an email to 12 Catholic friends, expressing our concern that the Church was going back to a defensive, pre-Vatican 2 stance.

We invited them to join us in establishing a South African movement to strive for a return to the spirit of the Second Vatican Council.

Our e-mail went viral and within a few months we had responses from about 500 people from all around the country, supporting our initiative.

Following further discussions we formed three branches: two larger branches in Gauteng and Cape Town and a small one in KwaZulu-Natal.

Not long after that, I described our new movement in The Southern Cross, calling for a change of heart in the Church following the example of St Pope John XXIII at the Second Vatican Council.

Subsequently we drafted a mission statement which has been updated regularly. Our current statement can be found on our website.

You suggest that WAACSA sees as its mission to keep alive the spirit and the teachings of the Second Vatican Council. How should we, as the Church, do that?

We need regularly to remind and re-educate Catholics about the teachings of the Second Vatican Council, through talks and discussions within parishes and in Catholic publications.

Many of the teachings have not yet translated into practice, nor have we developed them further to keep them relevant to the changing world.

And, most importantly, we need to keep a dialogue open with those who find change difficult and would like to remain in the First Vatican Council era.

Initially, you were inspired by the international We Are Church movement, at a time when that movement was regarded by some with suspicion. Since then, you’ve changed the name to We Are All Church, and broken structural ties with the international movement. What’s behind that?

We found the international movement too confrontational, even the name. That’s why we changed the name for our own movement right at the outset.

We don’t believe confrontation and demands are appropriate or effective strategies for bringing about transformation in the Church.

Also, we gradually realised that the international movement is not truly international as they seem to have difficulty representing cultures that are not Eurocentric.

Some people in the Church seem to regard WAACSA as a group of old white people who are discontented with the Church. Does that observation reflect reality?

The reality is that due to a combination of apartheid, hierarchicalism and other structural evils, too many Catholic laity in South Africa remain unempowered and are reluctant to stand up against abuse and clericalism, and to call for the Church’s conversion, to use a favourite phrase of Pope Francis.

It is an indictment of our Church that it is largely, though not entirely, lay white seniors who are engaging with the Church to transform.

Only a few bishops have openly opposed WAACSA, but they seem to have intimidated a number of clergy from collaborating with us.

Many bishops, priests and religious do support us and urge us to continue our important work of promoting open dialogue, empowering the laity and welcoming the marginalised.

Archbishop Brislin for a long time barred WAACSA from meeting on Catholic Church property. He has now revised that policy. Did WAACSA do anything to change his mind, or how did this reconciliation come about?

Apart from the ban on our Cape Town group, Archbishop Brislin has always been supportive and open to meeting with us.

Last year, after one of our members asked him why he continued to withhold permission for us to meet on Catholic property, he informed me that he had decided to lift the ban.

To my knowledge, no other bishop has banned WAACSA from meeting on Church property. Our Gauteng branch meets regularly in a Johannesburg parish.

What has the reaction of the “Catholic in the Pew” been to WAACSA?

The average Catholic in the pew continues to be encouraged to “pay, pray and obey”. The hierarchy, perhaps unconsciously, instils a culture of fear that prevents laity from thinking for themselves.

That makes listening to and acting on your inner voice scary, and almost revolutionary. So a movement like WAACSA is threatening to many.

We have lost sight of the fact that Jesus was a revolutionary.

The pastoral approach of Pope Francis reflects the vision of WAACSA more than that of his predecessors. Isn’t that a case of “mission accomplished”? Or what still needs to change and be done in the Church?

We couldn’t believe it when Pope Francis came up with his appeal for “dialogue, dialogue and more dialogue”, because that is the first aim in our WAACSA mission statement.

You ask, “What still needs to change in the Church?” The answer is: Everything.

Nothing has changed substantially yet, and I can’t see any change happening soon.

Without wanting to generalise, the hierarchy do not understand what dialogue is nor are they able to see how they abuse power. Pope Francis sees that, to a certain extent.

The laity see it more clearly because we live in the real world where we have learned that human beings cannot develop fully as individuals and in peaceful community unless there is dialogue and freedom from oppression.

What are the future plans for WAACSA?

We will continue to invite all Catholics to think critically, to question what they do not understand, and to have more confidence in their ability to discern the truth so that we can move forward together on our pilgrim path.

We pray daily that the Holy Spirit will renew the Church, knowing that a radical transformation is needed for us to rediscover how to follow Jesus and bring about the reign of God.

A specific plan that we are exploring is to create safe spaces for clergy and laity to dialogue so as to eradicate clericalism and become one People of God.