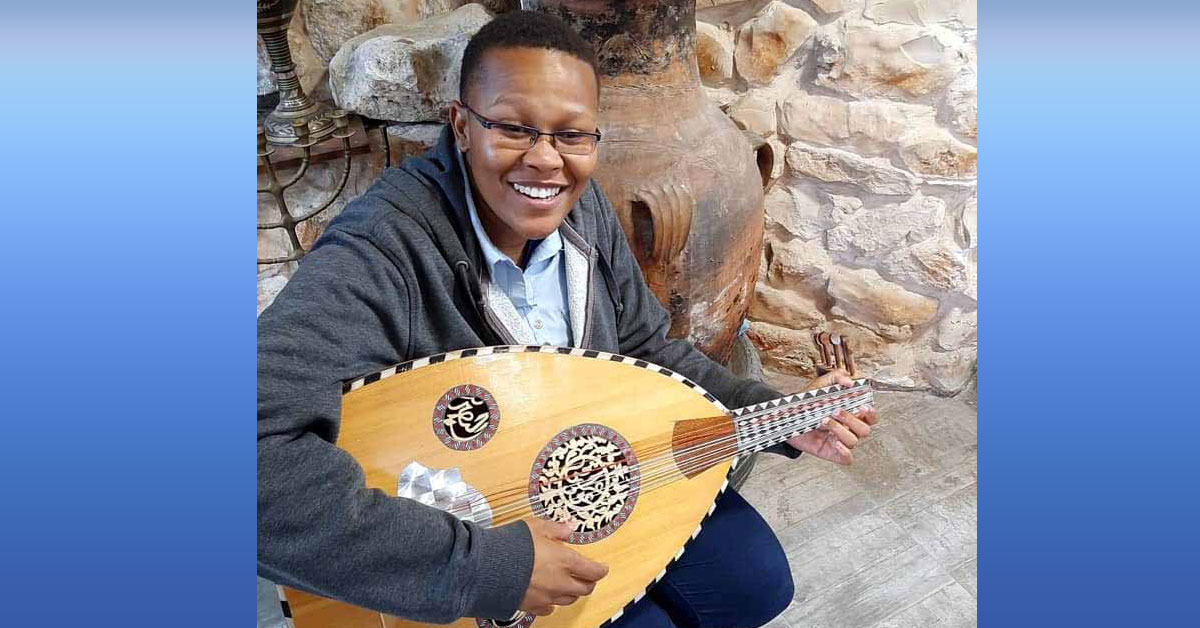 MolebogengKearabilwe plays an oud, the most popular musical instrument in Arabic music, during her recent pilgrimage to the Holy Land.

Catholic recording artist and choirmaster Molebogeng Kearabilwe finds inspiration for her music in her faith and in pilgrimages. She spoke to Daluxolo Moloantoa.

MolebogengKearabilwe is a well-known Catholic singer, choirmaster and song composer in Pretoria. But few people know of her other passion:  travelling to holy sites, particularly of the Catholic faith,  throughout the world.

The 31-year-old lecturer at SefakoMakgatho University, who is from Garankuwatownship, north of Pretoria, has so far visited three of these sites.

A past national president of the Association of Catholic Tertiary Students (ACTS), Molebogeng caught the travel bug because of her love for music.

That love began in her early teens. Molebogeng was then a member of the Junior Chiro Movement, and an altar server at her parish of Christ the King, in Zone 3 in Garankuwa.

When a member of the Junior Chiro movement relocated, she was asked to step into his shoes, and compose songs for the Garankuwa branch of the movement.

“It was then that I discovered that I could compose music. Every time we had a drama, choir or poetry competition, it was my duty to ensure that the musical side was well covered,” she recalled.

Molebogeng learned how to play the guitar in 2011. She was taught by Marco Cavanaro, who was a seminarian of the Neocatechumenal Way serving in the Waterkloof community of Pretoria. He is now a priest in the Netherlands.

In 2012 she travelled to the United States on a tour with the much-celebrated University of Pretoria Choir, where she was a student.

The following year she went to Zürich in Switzerland to complete a masters degree in human anatomy. Since then she has travelled on pilgrimage to Taizé in France, and on holiday to Rome, Italy.

However, it was Molebogeng’s recent private pilgrimage to the Holy Land which turned her whole perspective on her Catholic faith around.

“I wanted to visit the Holy Land because I wanted to see where Jesus lived. I wanted to experience something of what he had lived,” she said.

Her initial impression of the Holy Land was that, despite rapid developments in the region over the past centuries, much has stayed the same as it was in the old days

“On my first Friday in Jerusalem I was part of a tourist group taking the guided walk [on the Via Dolorosa] which Jesus had walked on his way to the cross”, she recalled.

“On this particular Friday the usual guides were nowhere in sight, so the walk became somewhat of a chaotic affair. It was only after a while, and in hindsight, that I realised that it was, in fact, a blessing in disguise, as that is most likely how the original walk would have been: chaotic.”

She explained that when visiting the Western Wall, one has to take a few steps back when leaving it, in line with a centuries-old tradition.

“The reason for this is that you are showing that you hold Jerusalem as your highest joy. You cannot turn your back to it,” she explained.

Molebogeng said that there were a number of places she visited where she encountered a particular energy in the air.

One of these was the Upper Room on Mount Zion, which recalls the Last Supper and the first Pentecost, where a fellow pilgrim had to be carried out on a stretcher due to an emotional experience.

Another site was at the Dome of the Rock, Islam’s third-holiest site.

“As non-Muslims we were not allowed inside. Nevertheless, the energy I encountered at this Muslim site strengthened my belief in the fact that…we are all on the same path,” she reflected. 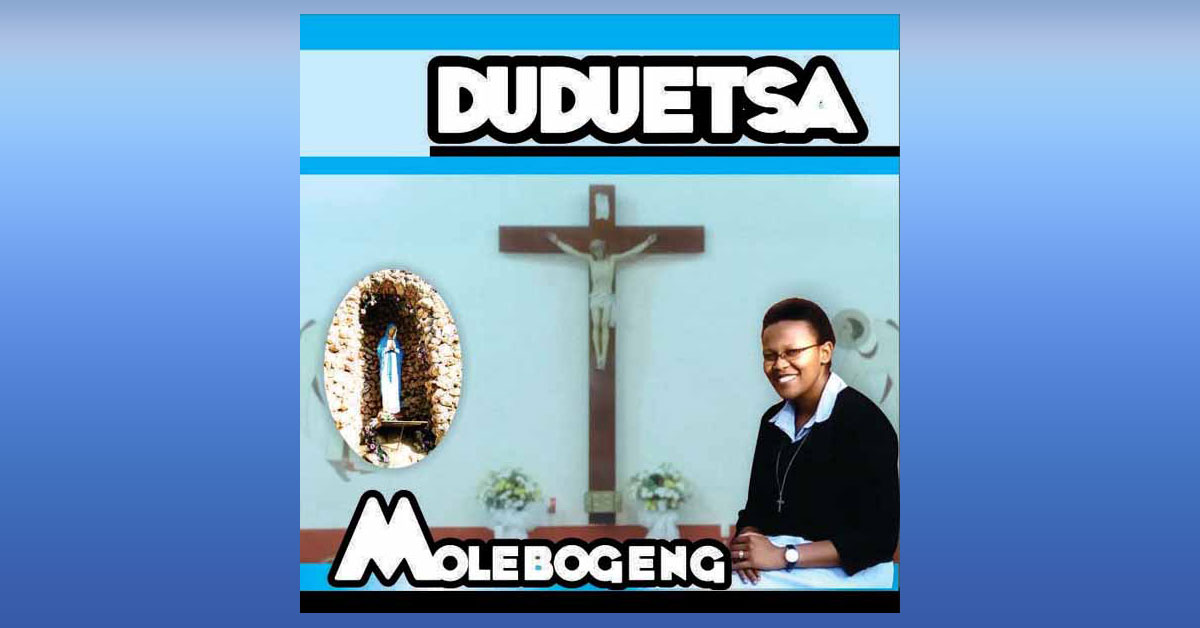 But the trip into Bethlehem broke her heart in two. She had not expected to come face-to-face with the sheer oppression in which the Palestinian people are living under the Israeli occupation.

“No people deserve to live under the conditions by which they live; more so because they are such a warm and welcoming people,” she emphasised.

Her favourite food in the Holy Land was falafel and salad in pita bread. “It is lovely Mediterranean food, with lots of interesting spices,” she said.

As a musician, she found many similarities between the music of the Eastern-rite Catholics and the Arab Muslims.

“The music varies according to the religious tradition of the area, but most of it is tonal and rhythmic. It truly was something special,” she noted.

“The music always drove me into a meditative state, and is deeply moving and awakening to one’s spirit. It truly lifts the mind to God.”

Going up the Mount of Olives and looking down over Jerusalem proved to be an experience of sheer serenity.

Another high point was entering into the House of Caiaphas, now the Mount Zion church of St Peter in Gallicantu (“St Peter where the cock crowed”), which is run by the Assumptionist Sisters.

This is where Jesus was tried and kept in captivity before he was taken to Pontius Pilate to be condemned. “It was surreal for me because I have composed a song about his experience during this time”, she pointed out.

Other highlights were celebrating Mass at Golgotha in the church of the Holy Sepulchre, and visiting Nazareth, especially the church of St Joseph which recalls the family life of Mary, Joseph and Jesus.

She would love to visit the Holy Land again. But before that, she will be making preparations for her next excursion to another Catholic Holy Site.

“This time I’ll be visiting a holy site which is off the beaten track,” she said. “It’s a choice between the shrine of Our Lady of Kibeho in Rwanda, the shrine of the Martyrs of Uganda, or Guadalupe in Mexico.”

One thing is certain, however: where she goes, Molebogeng will pick up music.“My faith and music are inspired by the places I visit,” she said.

“The album has 20 of my original compositions, and except for two songs, it’s all in my mother tongue, Setswana,” she said.

“As great as it is to sing in other languages, it is equally important to promote our own languages through music, too,” she noted.

The album was profiled on a vernacular music show on Radio Veritas hosted by ThatoMokoena.

“The feedback I receive from people is what makes it worthwhile,” the singer said.

“I was recently contacted by someone who, like me, enjoys going on pilgrimages. The person told me that for their last pilgrimage, they used my album as preparation for the trip. I was touched by the sentiment.”

Her market is surprisingly international. Duduetsang has been bought by people living in Germany, Zimbabwe, Malawi and the UK.

It is available online at Amazon, iTunes, iHeart and GooglePlay.

When she’s not lecturing, travelling or working on her music, Molebogeng is engaged in various other Church-centred activities.

She also acts as a spiritual guide—”Not director, as I’m not trained to be such,” she stressed—to Catholic students at SefakoMakgato Medical University in particular.

Molebogeng is also a conductor and sings in the Christ the New Man parish choir. The title song of her latest album, “Duduetsang”, has been a part of the choir’s Christmas repertoire since it was released.