Fr Chris Chatteris: How Not to Crash the Homily 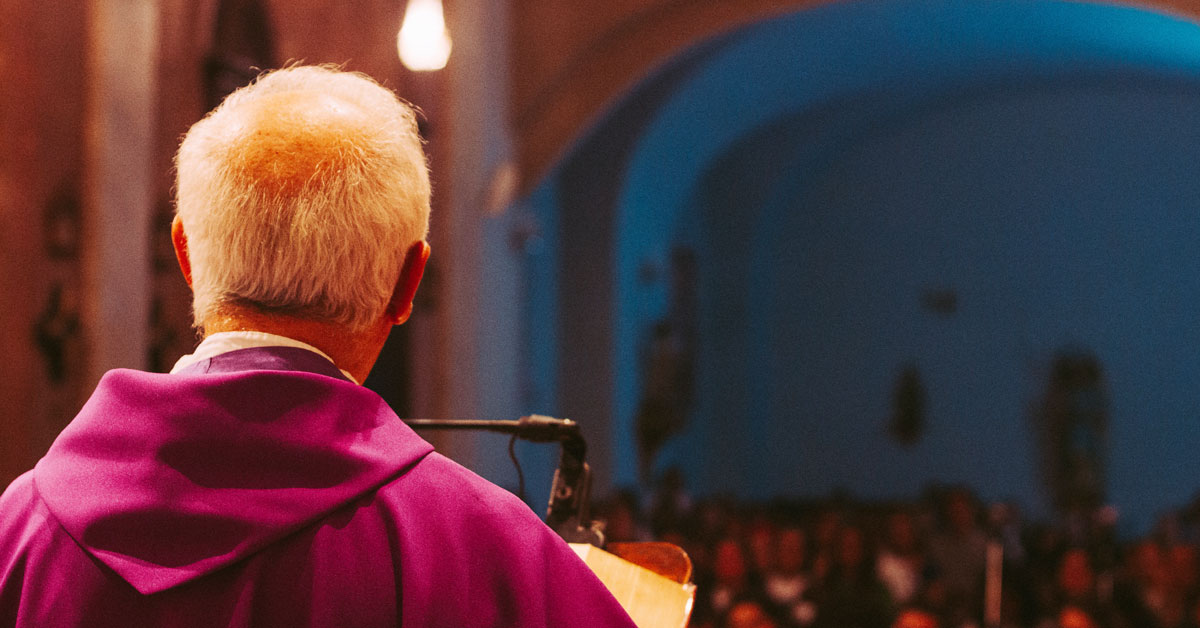 Has he prepared well, and is the congregation actually listening?

At a time when many are bemoaning the general quality of preaching, Fr Chris Chatteris SJ proposes to subject homilies to proper professional standards.

A preacher has just read a passage of sacred scripture, most likely the Gospel. Our good and worthy preacher (I’ll call him “him” because he usually is) proceeds to précis it.

No matter that the Gospel has just been read and is still ringing in the ears of the congregation. No matter that it is extremely familiar to the regular churchgoers—so familiar in fact that some of them know parts off by heart and others can quote chapter and verse.

Even so, our preacher insists on repeating, say, the story of the prodigal son, in his own words. What does he think he is doing? Does he imagine that he is reminding them of what they have just heard?

Or does he imagine that his own version of the tale will improve on Jesus’ own terse and dramatic telling? It’s difficult to know what, if anything, is going on in his mind.

He may not realise it, but he has crashed the plane on take-off. Some of the congregation want to stand up and say: “Please, Father, tell us something we don’t know!”

What they would effectively be saying is that he is failing in his duty to nourish them, which is why the homily is a “fail”, as they say in the tech world today.

Unfortunately, in the Catholic Church at least, the homily is the last unanswerable monologue. Without the possibility of giving some instant feedback, the congregation suffers in silence while the preacher ploughs on, pitifully paraphrasing the Word of God in a form vastly inferior to the original.

So the People of God go away angry, frustrated and unnourished. Thus does a homily induce spiritual diminishment—the exact opposite of what is hoped for from preaching. Such events are what a colleague and I call a “preaching plane crash”.

Why the choice of such a melodramatic image? It’s to highlight the issue of professionalism. I cannot speak for other denominations, but in my quite extensive experience of Catholic preaching, I find it frequently ranging from low quality to downright disastrous.

I hasten to add that at times I have contributed to these disasters, for preaching is, to some extent, an art—and art is not always successful. However, the fact is that there are clergy who “crash the homily” on a terrifyingly regular basis.

Some do it without fail every Sunday, several times. And here’s the question about professionalism: If a pilot crashed his plane regularly (assuming he survived), how long would it be before he lost his licence?

Even if he only dented his aircraft from time to time while taxiing, he would come under the professional microscope of his trade. In fact, he would almost certainly never have got his hands on the controls in the first place. The flight simulator would have eliminated him early on in training.

Yet ordained clergy, whose central task is to preach the Gospel of Jesus Christ, can perpetuate weekly disasters which alienate people from the Church and the Gospel. And despite this they retain their “licences”.

In the Catholic Church, bishops rarely suspend or withdraw a priest’s or deacon’s “faculties” to preach. The competency-checking that pilots have to undergo every six months has no equivalent among the clergy.

What happens in practice is that people in the congregation who are mobile drift off to other parishes or other denominations, or simply lapse from their Christian faith.

The preachers themselves are often mystified by this and complain about the poor attendance, sometimes blaming the victims.

People rarely tell them the truth. Nothing is done and the disasters simply continue, inflicted upon ever-dwindling numbers. Eventually the priest may be moved on to another parish, probably a poorer, less significant, less vocal one.

The question here is what did the congregation of the poorer parish do to deserve the foisting upon them of an incompetent preacher? Was it simply because they are poor and less likely to complain? I venture that it is because of the lack of professional accountability of the Roman Catholic priesthood.

Most professions have bodies which monitor the professional standards of their members. It’s not just airline pilots who are regularly checked for professional competence. Lawyers, doctors, journalists, auditors and other groups can all be called to account by their professional body or institute if their poor practice brings the profession into disrepute.

But this almost never happens to Catholic priests in the case of bad preaching.

Why is the bar set so low?

How can it be that we set the bar so low? After all, preaching is supposed to be a core competency?

We are not so negligent in other areas of Catholic pastoral practice. Catholic students for the priesthood have something called a “faculties” exam which they have to pass to get a “licence” to practise as a priest.

The focus of this exam is on the hearing of confessions, but in theory it includes the ability to preach competently. Students quite frequently fail it the first time because they are judged insufficiently prepared to hear confessions.

However, I have yet to hear of a seminarian who has failed to get his faculties because he was judged insufficiently competent to preach.

This probably says something about a Catholic sacramental theology which—despite the insistence of Vatican II on the proclamation of the Word in the Eucharist, and the sacramentality of the Word—persists in the idea that as long as people have received holy Communion, all is well. I think Catholic preaching is a victim of an unconscious theology of ex opere operato (“from the work performed” or automatically).

This is a bit of pastoral theology for the protection of overscrupulous clergy and congregants which states that the sacraments are valid despite the foibles or carelessness of the celebrant.

So if the priest is distracted during the Mass, the Eucharist is still valid, the Lord is still really present. Ex opere operato is all very well in the realm of the sacraments, but it can unconsciously foster an automatic and minimalistic mentality towards preaching.

Could this mentality be affecting Catholic preaching? There are certainly some who seem to think that a good homily simply happens automatically, ex opera operato, without any preparation.

One man I knew used to boast that he never knew what he was going to say when he went into the pulpit!

Needless to say, it wasn’t great. An ex opere operato view of the work of preaching is obviously a heaven-sent relief for the idle and the unimaginative.

Why spend the hours of study, prayer and laborious thought which are required to preach well when one can rely on a kind of theological automatic pilot? This would not be the first time in our history that ritualism became the refuge of clergy who cannot or will not rise to serious pastoral challenges but remain at the level of functionaries.

Those medieval massing priests who used to do nothing but say several Masses a day were, I would guess, not the greatest of preachers. Anyone who regularly watches television programmes on air crash investigations will know that there is an infinite number of ways to crash a plane.

Here the analogy holds good: there is a multiplicity of ways of causing one’s homily to fail. The method mentioned above—a summary of the readings in the preacher’s own words—is just one among many.

I propose, therefore, to conduct in a series of articles a kind of homiletical “Air Crash Investigation”. My approach has been criticised for being rather negative but I believe it’s necessary and I hope that the articles that follow over the next few months will be a helpful “examination of conscience” for the preacher or aspiring preacher who hopes to “fly” with greater safety and confidence for the sake of the People of God.

It’s a commonplace to say that preachers target themselves with their messages. The same is surely true of those who “preach” about preaching.

We feel we can say these things because, as a Jesuit confessor once said in an unguarded moment in the box in response to the confession of a fault: “Why, I often do that myself!”

This is the first of a series of articles by Fr Chatteris on preaching.