Why was Jesus crucified? What events led up to Christ’s Passion? In the second of five articles on Jesus’ last days, Günther Simmermacher follows Our Lord’s entry into Jerusalem. 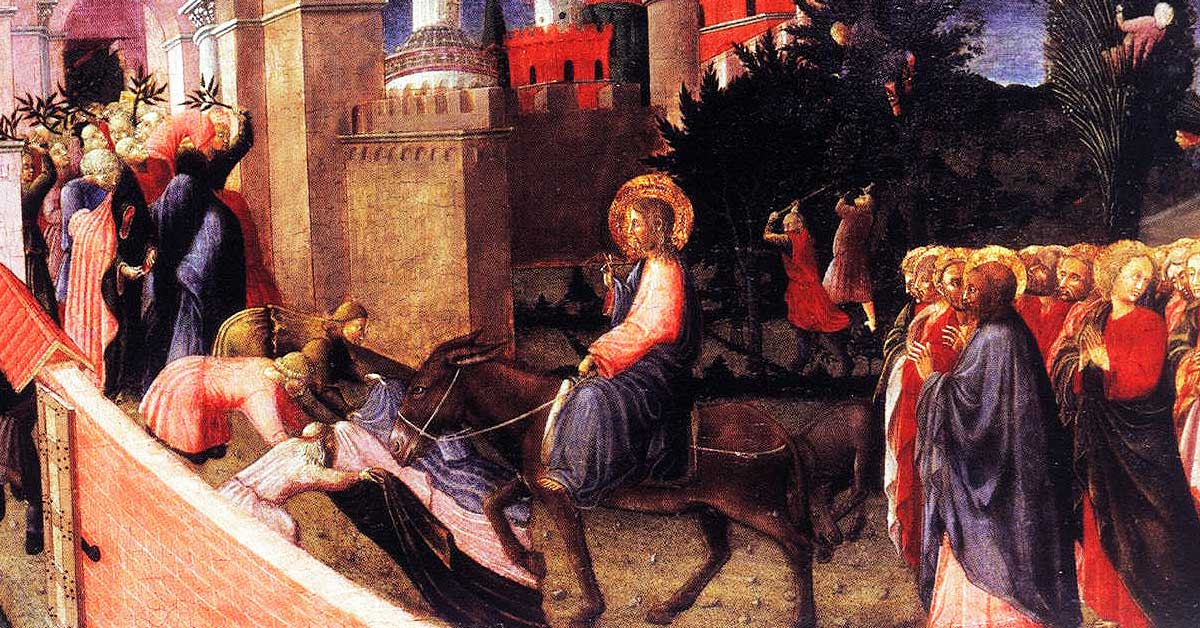 Yesterday we accompanied Jesus as he raised Lazarus from the dead in Bethany, went into hiding in Ephraim (today’s Taybeh), and then returned for six days to Bethany where, according to John’s Gospel, Lazarus’ sister Mary anointed him as the Messiah.

It’s now the day after the Sabbath, and Jesus is rising to make the short trip — a Sabbath day’s journey, or about a kilometre — to Bethpage on the Mount of Olives, the ridge that overlooks Jerusalem from the east. The focal point from there is the Temple.

Jesus has sent two of his disciples ahead to collect a donkey and a colt in Bethpage.

On collecting the animals, the disciples didn’t know which mode of transport Jesus would choose to sit on when he’d proceed to enter Jerusalem. To be on the safe side, they spread garments on both beasts of burden, to make Jesus’ ride more comfortable.

So at Bethpage Jesus catches up with his disciples. He says he will ride on the donkey — a decision that isn’t just a question of personal preference.

Riding into Jerusalem on a young male horse might look like the martial procession of a soldier. The donkey, however, has theological significance which the Jews, people well-versed in Scripture, will easily understand.

On the back of the donkey, Jesus enters Jerusalem in imitation of King Solomon, whose own entry into Jerusalem on the royal mule almost a millennium earlier was a declaration of his kingship (1 Kings 1:32-40). The message is clear: This man from Galilee, from the House of David, is claiming a kingship.

The choice of animals also fulfils the prophecy of Zechariah: “The Coming of Zion’s King — See, your king comes to you, righteous and victorious, lowly and riding on a donkey, on a colt, the foal of a donkey” (9:9).

To those who observe the scene and even participate in it, Jesus is claiming to be the heir of King David.

They shout: “Hosanna! Blessed is he who is coming in the name of the Lord! Blessed is the coming kingdom of David our father! Hosanna in the highest heavens!” (Mk 11:9-10; Mt 21:9).

And in honour of he who is coming in the name of the Lord, the people are covering the ground with their cloaks and palm branches.

The palm branches have meaning for both the Jews and the Romans. To the occupiers, it might look like this Galilean is staging a victory procession of one who has already conquered. But to them, this Galilean from Nazareth is hardly the first such rouser of the rabble, nor will he be the last… 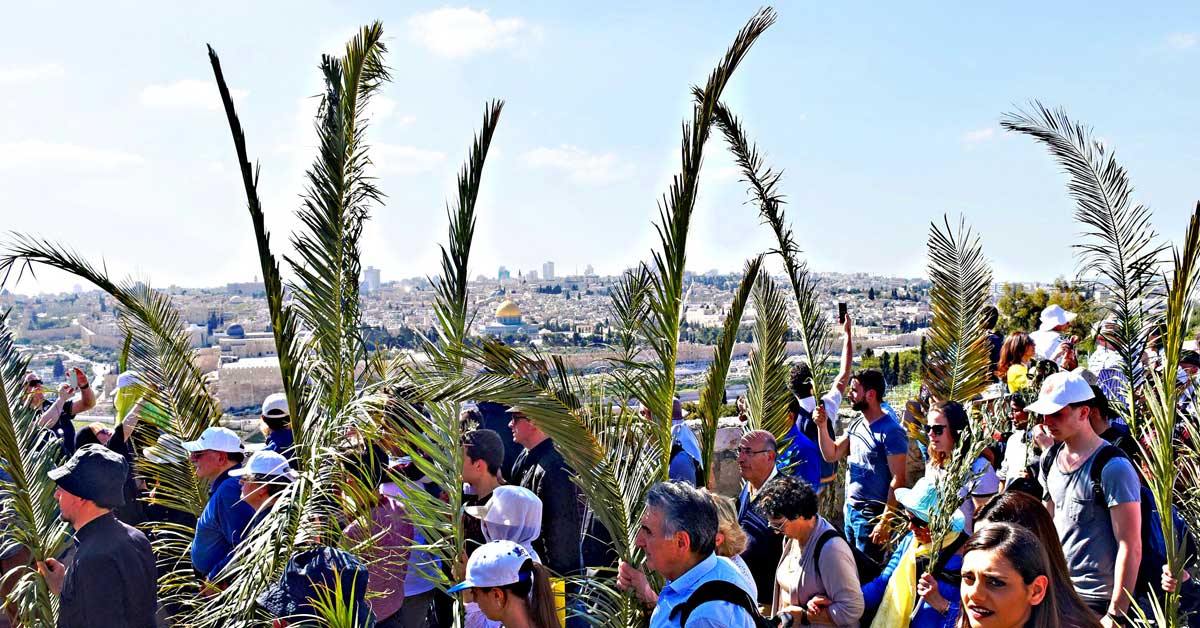 Christians carry palm branches while walking the traditional path that Jesus took on his last entry into Jerusalem during the Palm Sunday Procession on the Mount of Olives in Jerusalem. In the background is the golden Dome of the Rock, where in Jesus’ time the Temple stood. (Photo: Debbie Hill/CNS)

As the procession descends the Mount of Olives, Jesus stops. He surveys the city of Jerusalem, with the Temple dominating the view — and weeps for its future destruction.

The scene is recalled at the present-day church of Dominus Flevit (the Lord Wept), which is shaped like a teardrop. And it is here where Jesus addresses the Pharisees who have objected to all the Hosannas:

“Yes, a time is coming when your enemies will raise fortifications all round you, when they will encircle you and hem you in on every side; they will dash you and the children inside your walls to the ground; they will leave not one stone standing on another within you, because you did not recognise the moment of your visitation” (Lk 19:43-44).

His listeners don’t know it, but this is exactly what will happen when the Romans put down the Jewish rebellion of 66-70 AD, and raze the Temple.

Jesus’procession to Jerusalem has indeed been triumphant. The crowds see Jesus as the liberator from the yoke of Roman occupation, with its violence, excessive taxations and contempt for their religion. The promise is freedom.

And surely, a man who can bring rotting corpses back to life will conquer the hated Romans. A man who demonstrably has Yahweh on his side, this successor of David himself, cannot be defeated.

How will these people react when it turns out this man, in whom they have invested such high hopes, turns out to be subject to judgment by the Roman procurator who — Spoiler Alert — will condemn him to die in the most demeaning way possible.

But this lies in the future. For now, Jesus has entered Jerusalem in triumph.

He and the Twelve visit the Temple, but it’s getting late now, and they decide to go back to Bethany.

A challenge to the priests

It is now a day later, and the group is returning to the Temple where Jesus is about to do something dramatic.

This is the week of the Passover, so Jerusalem is packed with pilgrims, maybe up to 400000 of them. 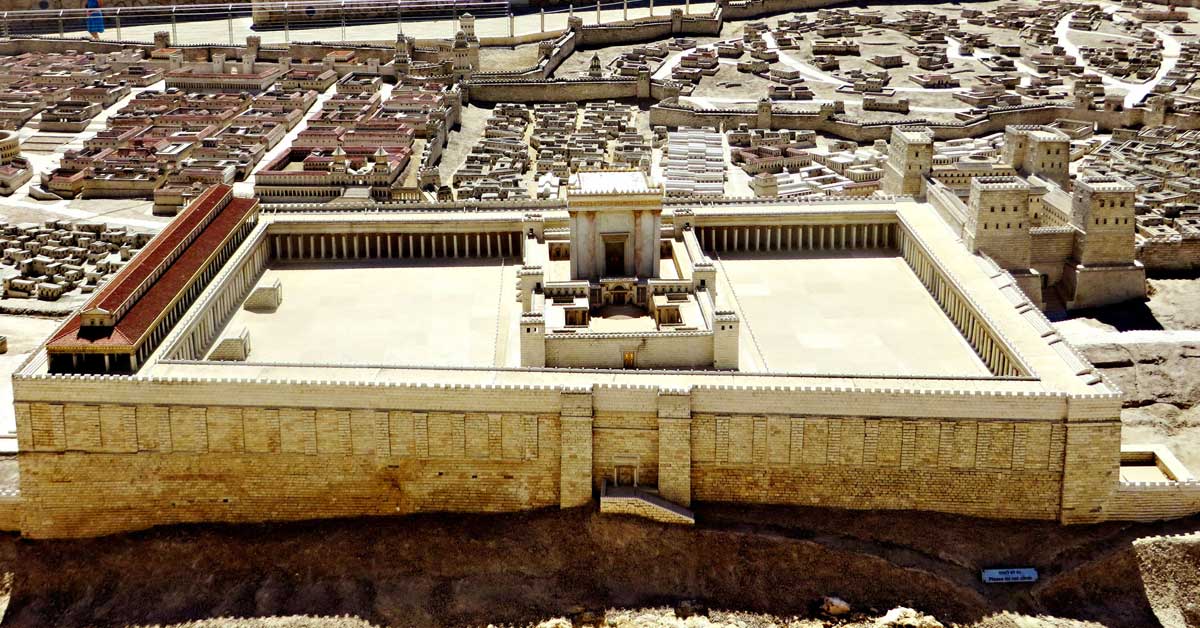 The Temple is recreated in a model of 1st-century Jerusalem at the Israel Museum. (Photo: Günther Simmermacher)

For the moneychangers, men with a reputation of dishonesty, this is high season. Their scheme is to exchange the currency the pilgrims bring with them into the Temple’s own currency, the half-shekel, with which the faithful must pay the Temple tax.

In short order, Jesus overturns the tables of the moneychangers and those of the dove sellers in what may be a show of calculated anger, rather than a spontaneous loss of temper.

He accuses the traders — and more importantly, the corrupt, venal Temple authorities — of having turned his Father’s house into a den of thieves.

With a whip of cords he drives these traders out and tells them not to come back.

This is not just a disruption of commerce. This is a direct challenge to the authority of the priests, whom Jesus accuses of corruption and exploitation, naming widows as particular victims.

It’s not the first time Jesus has criticised the religious oligarchs. For example, Jesus has already condemned the exploitative extraction of qorban, the templar sacrifice demanded of people regardless of their other financial obligations (Mark 7:6-13).

In John’s Gospel, the overturning of the tables appears on an earlier Passover pilgrimage. Some scholars believe that there were two such instances. Or maybe John’s reference points to a series of condemnations of the exploitation committed by the religious authorities.

Debates in the Temple

Surprisingly, today Jesus is not arrested, and he will continue to preach, debate and heal at the Temple over the next few days.

But if the authorities were reluctant to pull the trigger before, they now have decided to eliminate Jesus — though not just yet…

Over the next days in the Temple, the priestly classes confront and challenge Jesus in debate, setting rhetorical traps to elicit incriminating answers.

Perhaps among them is Joseph of Arimathea, a respected member of the Sanhedrin, the religious council.

Many of Jesus’ answers take the form of parables. And it is the Parable of the Bad Tenants — with it message of the new usurping the old — which the high priest will hold against Jesus.

The chief priests saw the acclaim with which the crowds had greeted Jesus a few days earlier, and the excitement with which the people have followed his debates with the Pharisees and the Sadducees and the Herodians and the scribes. So their caution in avoiding the disturbance which arresting the Nazarene may cause is judicious (cf Lk 22:2). But make no mistake, they are already plotting Jesus’ death.

And Judas’ offer to provide incriminating evidence will give them the opportunity to put their plot into action.

Jesus knows this and tells the disciples: “It will be Passover, as you know, in two days’ time, and the Son of Man will be handed over to be crucified.”

Tomorrow: The Last Supper and the betrayal in the Garden.