In the third of five articles on Jesus’ last days, Günther Simmermacher follows the Lord and the disciples at the Last Supper and into the Garden of Gethsemane. 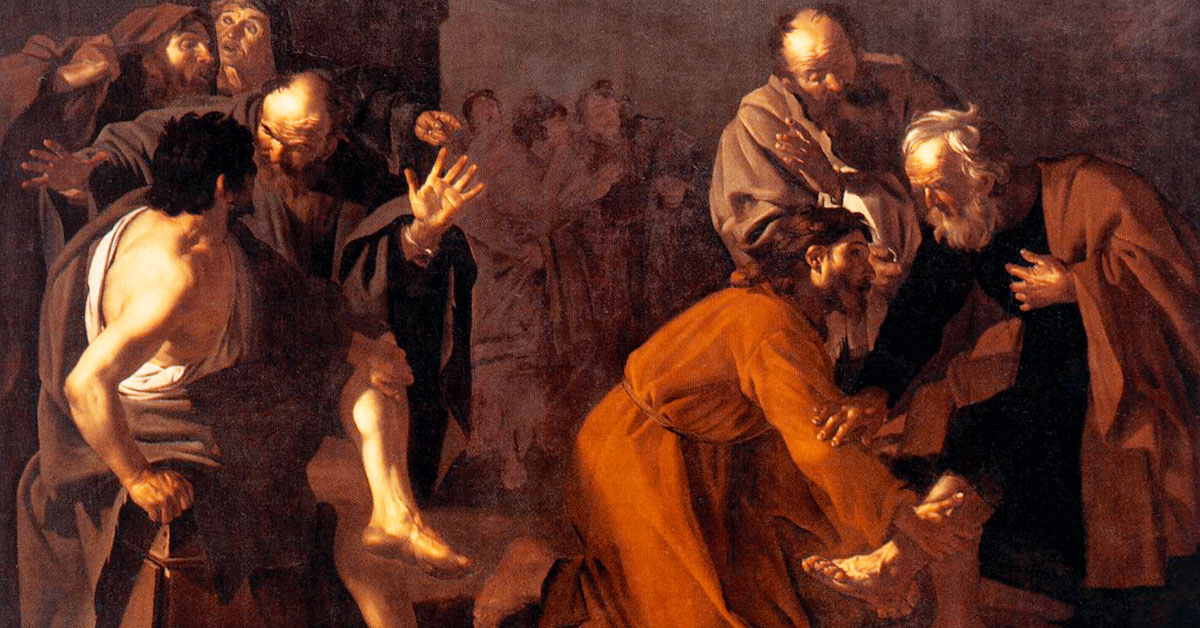 It is a busy day in Jerusalem. The city is packed with multitudes of pilgrims on their Passover pilgrimage to the Temple. People are rushing around to make their required preparations for the feast.

These preparations involve more than just planning a supper. They also require rituals such as the slaughter of the sacrificial lamb, taking the ritual bath, and clearing every nook and cranny of the home of crumbs of unleavened bread, in remembrance of the Exodus.

It is also a busy day for Jesus and the disciples (and scholars will argue over centuries exactly which day it is today). Tonight, they are having what will become the most famous and consequential supper in the history of mankind.

Jesus puts Peter and John in charge of setting things up in a location he has arranged.

We may note that he hasn’t appointed the treasurer of the group to be part of the organising team. Judas Iscariot stays behind in Bethany with the other nine disciples — so he will not be able to guide the high priest’s henchmen to the place where Jesus and his disciples will have their Seder supper.

So Peter and John set out to find a man carrying a jar of water, whom they easily identify, for carrying water is usually women’s work. Maybe he is a celibate Essene monk (as the scholar Fr Bargil Pixner OSB has suggested).

The Essenes are a Jewish sect which also has a monastic presence in the desert. There they produce and store what would become known as the Dead Sea Scrolls.

The water carrier leads the disciples to a man at whose inn an upper room has been booked for the Seder. It’s possibly an Essene establishment, on Mount Zion in the south of Jerusalem.

In our day, the Upper Room is a Crusader structure called the Cenacle. It stands on what might well have been the site of the original building.

Having set up everything, Peter and John return to Bethany, and join Jesus and the other disciples. The group sets off together, taking a detour so as to avoid passing by the house of the high priest.

Inside the Upper Room

The room is set out in the traditional manner, with a low, three-sided table and cushions, and the food presented in the centre. The diners are going to recline on the pillows, resting on their left elbow and eating with the right hand.

The group take their places. As the head of the dinner, Jesus reclines in the second position on the left-wing of the table. To his right is John (we know that, because he will lean against Jesus’ chest). Facing him on the opposite side is Peter. And to Jesus’ left is the position for the guest of honour.

Tonight’s “guest of honour” is Judas Iscariot, ideally positioned to receive bread dipped in a dish from Jesus.

Jesus knows what Judas is up to, and still, right to the end, he gives the man who will betray him the chance to abandon his wicked scheme. 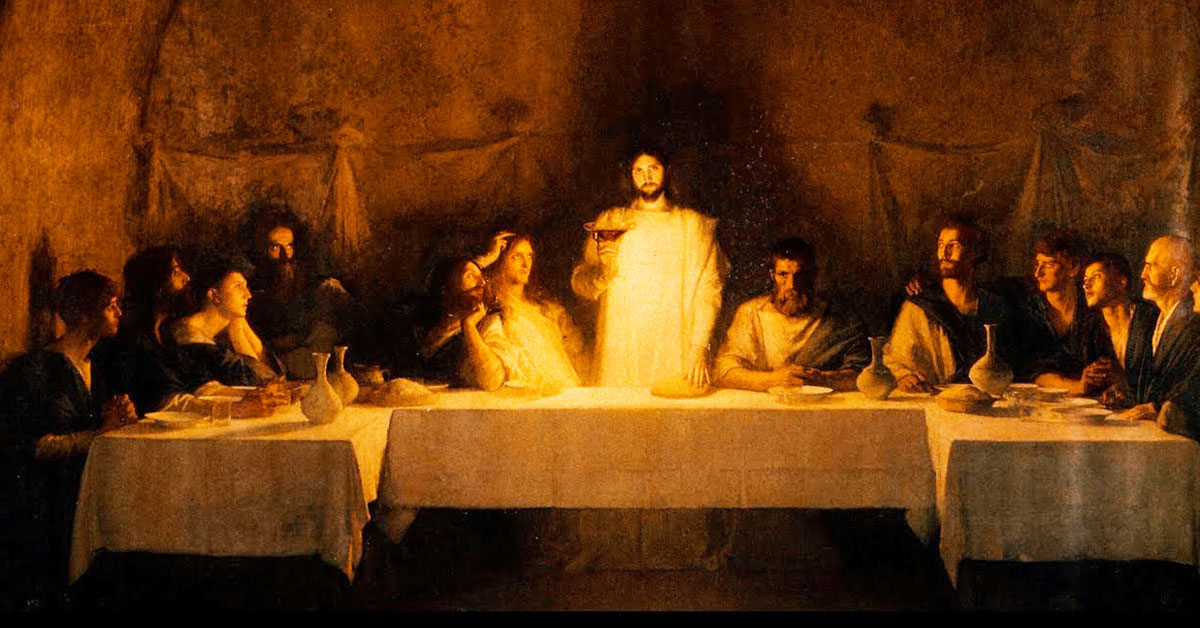 But before we continue, let’s have a look at what is being served.

The meal must include four glasses of wine; unleavened bread; bitter herbs (such as chicory, eryngo or radishes) dipped in salted water; haroset (a dip made of fruits, nuts, grains, possible wine); the paschal lamb (even just a walnut-sized portion of it, for its purpose is symbolic, not culinary); and a stew of maybe some meat with lentils and vegetables.

The diners have had their ritual bath, but Jesus decides that their feet — and only their feet — need a new ritual cleaning. In a show of humility, Jesus washes the feet of the disciples, one after another, finishing with a very reluctant and petulant Peter.

He then instructs them, by way of metaphor, to keep washing each other’s feet.

Feet washed, Jesus raises the first of the four glasses of wine, and recites the Kiddush blessing: “Blessed are you Lord, our God, King of the universe, who creates the fruit of the vine…” They all drink.

Suddenly, the mood changes. Jesus declares: “One of you is going to betray me.” This causes obvious consternation, and Simon Peter motions to John to ask Jesus who the traitor might be.

Jesus answers John’s question: “It is the one to whom I give the piece of bread that I dip in the dish.” And then he passes the dipped bread to Judas.

The moment Judas receives the bread, Jesus tells him: “What you are going to do, do quickly.”

The disciples are confused: did Jesus just call Judas a traitor, or did he send him out on an errand? (Jn 13:21-30). Their inaction points to the latter conclusion.

While Judas hotfoots unhindered to the high priest’s residence, the Seder in the Upper Room continues.

Now Jesus pours the second cup of wine, and says: “I have ardently longed to eat this Passover with you before I suffer; because, I tell you, I shall not eat it until it is fulfilled in the kingdom of God.”

Then, taking a cup, he gives thanks and says: “Take this and share it among you, because from now on, I tell you, I shall never again drink wine until the kingdom of God comes.”

Finally, they start to eat their meal.

Jesus then pours the third cup of wine, takes a matzah from the middle of the table, again gives thanks, and says: “This is my body given for you; do this in remembrance of me.”

After the supper has ended, Jesus pours the fourth cup, and says: “This cup is the new covenant in my blood poured out for you.”

The disciples don’t know it yet, but the Eucharist has been instituted.

The Seder meal is over, and Jesus’ party is leaving the Upper Room and Mount Zion. It’s too late to return to Bethany, so they make their way to a place they know at the foot of the Mount of Olives, going from the south to the east. 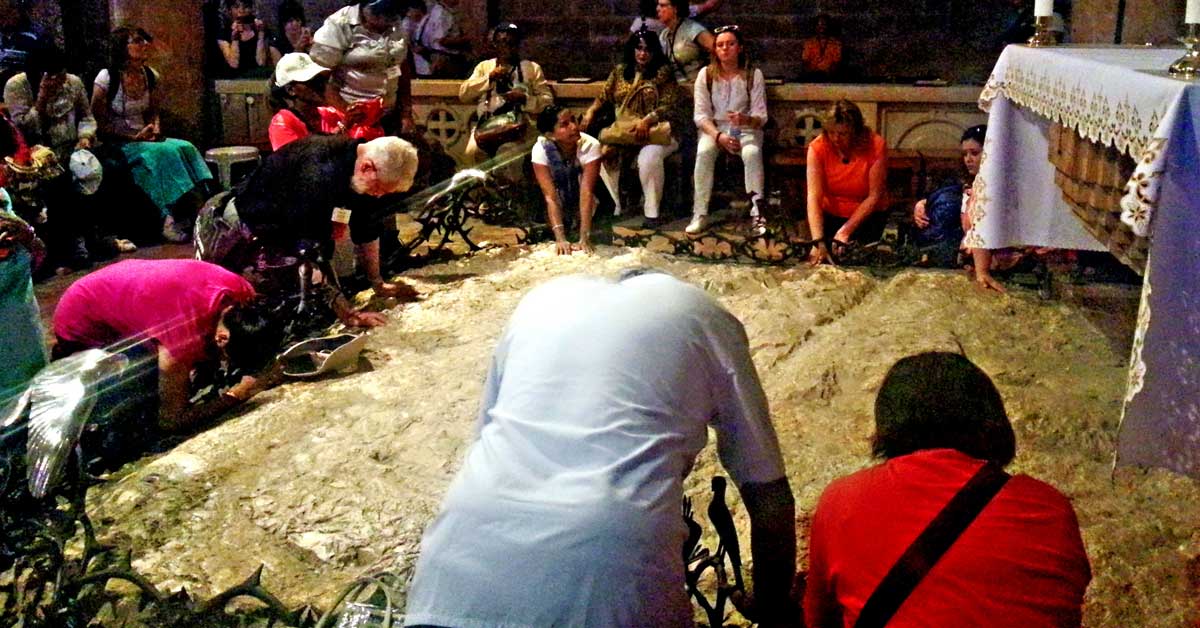 Pilgrims pray at the Rock of the Agony in the church of All Nations in the Garden of Gethsemane at the foot of the Mount of Olives.

The way to Gethsemane

As they did on the way to the Upper Room, they again take a detour, walking through the Valley of Gehenna (which means “Entrance to Hell”).

Here Jesus tells the disciples: “You will all fall away, for the scripture says: ‘I shall strike the shepherd and the sheep will be scattered.’ However, after my resurrection I shall go before you into Galilee.”

Peter focuses on the prediction of abandonment rather than the point of resurrection. “Even if all fall away, I will not.”

But Jesus knows better: “I tell you, this day, this very night, before the cock crows twice, you will have disowned me three times.’

Peter and the others pledge their unstinting loyalty, unaware of how soon their fidelity shall be tested.

Finally they arrive at the olive grove called Gat-Smane (the Aramaic word for oil press), a place we know better as Gethsemane, where there is a cave with an olive press in which the group can rest.

In our day, a small Franciscan chapel is in that cave, next to the place known as Mary’s Tomb and cut off from the rest of the Garden of Gethsemane by a busy road.

Jesus asks Peter and the brothers James and John to go with him, leaving the other eight at the cave. After a short walk, he tells the trio to stay awake while he goes off to pray.

Sitting on a rock, Jesus starts to pray and is overcome by dread for his impending fate. He experiences hematidrosis, a condition that can occur in situations of extreme stress when blood vessels that feed the sweat glands tear, causing the afflicted person to “sweat blood”.

The “Rock of Agony” on which Jesus prayed is now at the foot of the altar in the magnificent church of All Nations, a marvel of architecture located next to the remnants of the olive grove.

In our times, there are only a few trees left in the garden. Nobody knows how old they are, but, given that olive trees regenerate themselves when cut down, some of them are almost certainly descendants from those trees that witnessed Jesus’ arrest. 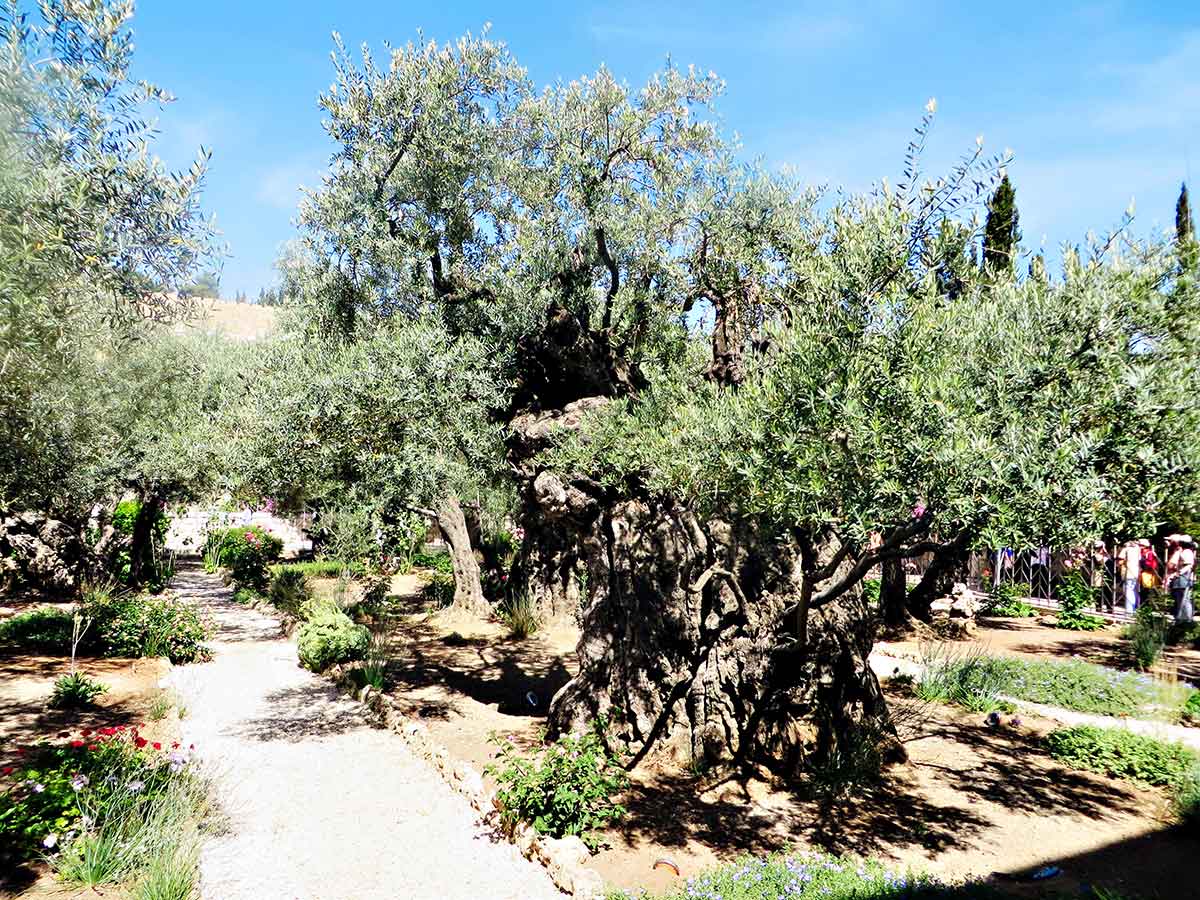 Olive trees in the Garden of Gethsemane, on the foot of the Mount of Olives.

Having asked the Father to release him from his dreadful fate but submitting to his will, Jesus returns to his three trusted followers—and finds them asleep. He reprimands them and then notes that his betrayer is on his way.

They are at the cave where the other eight had been left when the high priest’s arresting party, armed with swords and clubs, arrives.

In the torchlight, Judas steps forward, goes up to Jesus, and kisses him by way of a “greeting”.

As the soldiers move to arrest their target, Peter is ready to resist, but Jesus tells him to let it be. He then heals the ear of the high priest’s servant Malchus, which Peter had severed.

But Jesus also reminds the arresting party of their cowardice: “Am I a bandit, that you had to set out with swords and clubs? When I was among you in the Temple day after day you never made a move to lay hands on me. But this is your hour; this is the reign of darkness.”

Jesus is bound and led away while the disciples take flight. Other than Peter and John, we won’t see them again until Sunday evening.

Tomorrow: The trials of Jesus