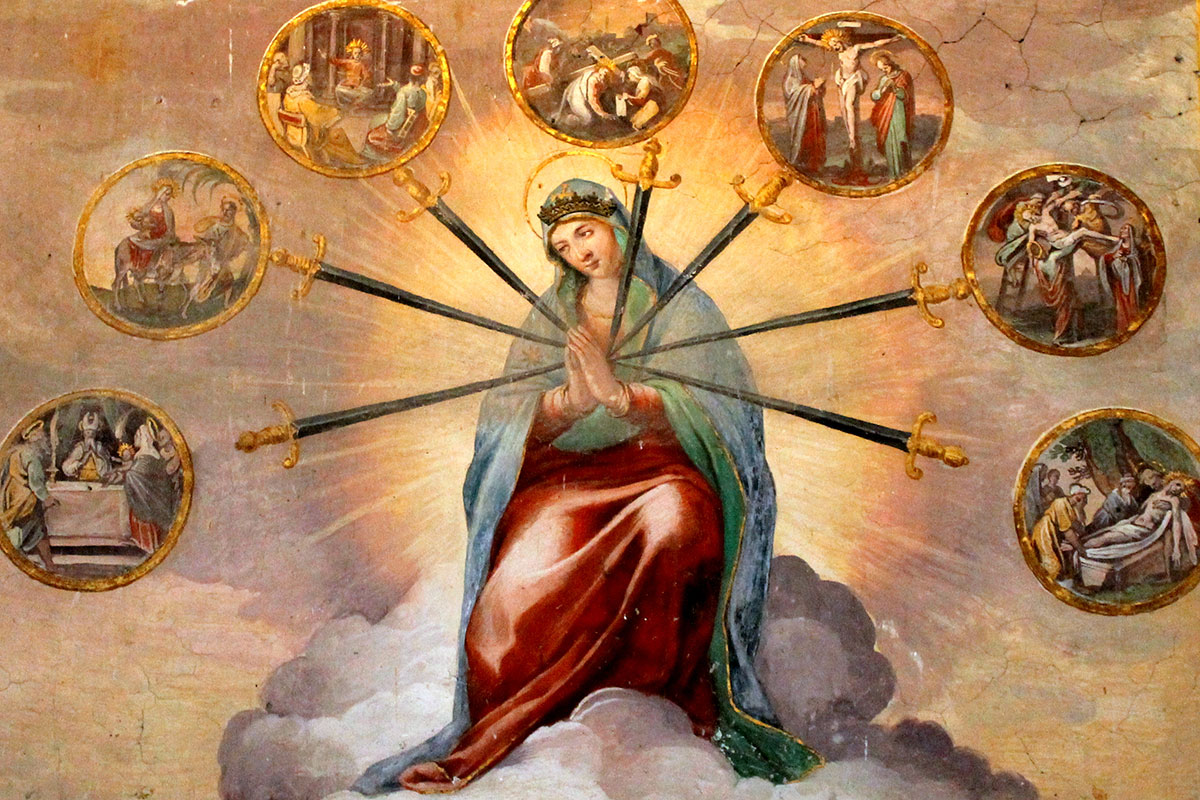 The Seven Sorrows of Mary, painted by Antonio Tempesta

By Cindy Wooden –  Pope Francis asked people to keep a long tradition of Catholic piety by focusing on “the suffering and sorrows of Our Lady.”

“Honor Our Lady and say, ‘This is my mother,’ because she is mother. This is the title that she received from Jesus precisely there, at the cross,” the pope said at Mass April 3. Jesus “did not make her prime minister or give her ‘functional’ titles. Only ‘mother.'”

Mary did not ask for any honour or special titles, the pope said. “She didn’t ask to be a quasi-redemptrix or a co-redemptrix, no. There is only one redeemer and this title cannot be duplicated.”

For decades, some Catholics have been petitioning the popes to recognise Mary as “co-redemptrix” to highlight the essential role she played in redemption.

“Just disciple and mother – and in that way, as mother, we must think about her, seek her out, pray to her,” Pope Francis said. “She is the mother in the church that is mother. In the maternity of Our Lady, we see the maternity of the church, which receives everyone, good and bad, everyone.”

Pope Francis asked Catholics to spend time considering the “seven sorrows” of Mary: Simeon’s prophecy that a sword would pierce her heart; the flight into Egypt; the worry when the child Jesus could not be found because he was in the temple; meeting Jesus on the way to Calvary; seeing Jesus on the cross; witnessing Jesus, lifeless, being taken down from the cross; and seeing Jesus being buried in the tomb.

Mary bore those sufferings “with strength, with tears — it wasn’t a fake cry, hers was truly a heart destroyed by pain,” the pope said.

Pope Francis said that late in the evening, when he prays the Angelus prayer, he contemplates the seven sorrows and recalls “how the mother of the church, with so much pain, gave birth to all of us.”

With the morning Masses from the chapel of the Domus Sanctae Marthae livestreamed during the coronavirus crisis, Pope Francis begins the liturgy with a special thought and prayer intention each day.

“There are people who already are thinking about the ‘after,’ what happens after the pandemic,” the pope said April 3. They already are strategizing ways to alleviate “all the problems that will come – problems of poverty, jobs, hunger. Let us pray for all the people who are helping today, but also thinking of tomorrow to help all of us.”

Why the Earth Trembled and All Went Dark
Share