Pope: Mystery Of God’s Love Is Revealed On The Cross 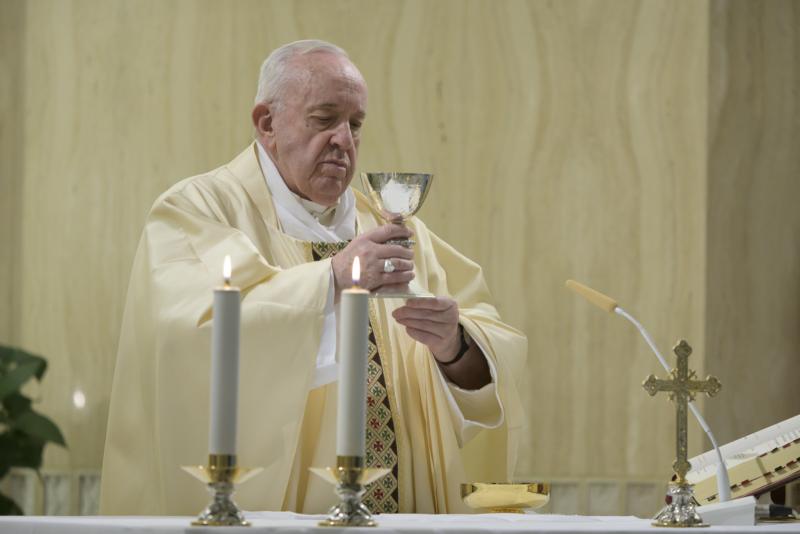 Pope Francis celebrates Mass in the chapel of his Vatican residence, the Domus Sanctae Marthae. The pope prayed for Europe as countries across the continent deal with the coronavirus pandemic and struggle to find a common plan for the post-pandemic recovery. (CNS photo/Vatican Media)

By Junno Arocho Esteves – The cross is more than just a reminder of Christ’s death; it is a symbol of humanity’s redemption and God’s love for all, Pope Francis said.

“How many people, how many Christians spend their time looking at the crucifix,” the pope said in his homily during the live broadcast of his daily morning Mass in the chapel of his residence, the Domus Sanctae Marthae.

“There they find everything because they have understood – the Holy Spirit has made them understand – that on the cross there is all the knowledge, all of God’s love, all the Christian wisdom,” he said.

The pope began his Mass with a prayer for Europe as countries across the continent deal with the coronavirus pandemic and struggle to find a common plan for the post-pandemic recovery.

“In this time, in which unity is necessary among us, among nations, let us pray for Europe,” he said, “so that Europe may be able to have this unity, this fraternal unity dreamed of by the founding fathers of the European Union.”

Pope Francis’ prayers for Europe came the morning after he spoke by phone with French President Emmanuel Macron about the European Union’s response to the pandemic.

Although the Vatican issued no statement regarding the conversation, Macron tweeted that he and the pope discussed “the ordeal that humanity is going through and what it requires of us: supporting Africa and helping the poorest countries; alleviating suffering by a universal cease fire in conflicts; showing a unified and united Europe.”

In his homily at the Mass, the pope reflected on the day’s Gospel reading from St. John, in which the apostle states that “God so loved the world that he gave his only-begotten son, so that everyone who believes in him might not perish but might have eternal life.”

A crucifix, the pope said, “is not an object to put here or there” but rather “the expression of God’s love.”

“God loves us and he loves us – as one saint said – with madness. God’s love seems like madness,” the pope said.

Although St. John also describes Jesus as the light of the world, he added, many people, including Christians, continue to live in darkness like “human bats.”

Pope Francis called on Christians to allow the light of God’s love to shine so that it may “help us to see things with the light of God, with the true light and not with the darkness that the lord of darkness gives us.”

“We too, when we are in sin, are in this state,” the pope said. “We do not tolerate the light. It is more comfortable for us to live in darkness; the light slaps us and makes us see what we do not want to see.”