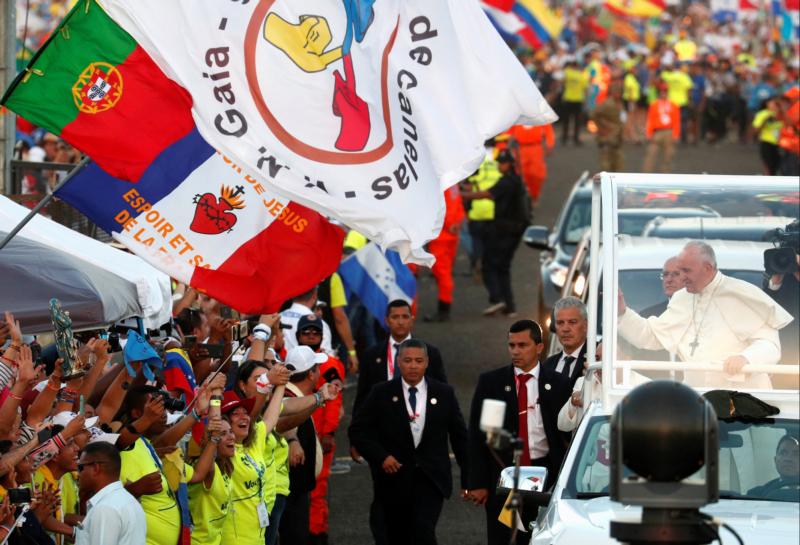 A Portuguese flag is seen near Pope Francis as he greets the crowd before celebrating Mass for World Youth Day pilgrims at St. John Paul II Field in Panama City Jan. 27, 2019. World Youth Day in Lisbon, Portugal, will be pushed back until August 2023, the Vatican announced. (CNS photo/Alessandro Bianchi, Reuters)

By Cindy Wooden – Pope Francis has agreed with a recommendation by the Dicastery for Laity, the Family and Life to postpone by one year the next gatherings of the World Meeting of Families and World Youth Day.

Cardinal Kevin Farrell, prefect of the dicastery, said that now is the time his office would be signing contracts with hotels and airlines if the World Meeting of Families were still to be held in 2021, “but no one knows what will happen”, so it seemed prudent to push the meeting back a year.

The dicastery also would not hold two large gatherings during the same summer, so that was one reason World Youth Day was pushed back too, he said.

The other reason, Cardinal Farrell explained, is that although people are talking about “returning to normal” and government leaders are making plans for phasing out lockdowns and reopening businesses, “we do not believe travel will be that extensive” anytime soon.

The handoff originally was scheduled for April 5, on Palm Sunday, but was postponed because of the lockdowns and travel bans in place to curb the spread of the coronavirus.

If the young representatives from Panama and Portugal are not able to travel to Rome in November, Cardinal Farrell said, Panamanians and Portuguese already living in Rome will participate in the event.—CNS