Case Closed: Vatican Says Bones are Not Those of Missing Teenager 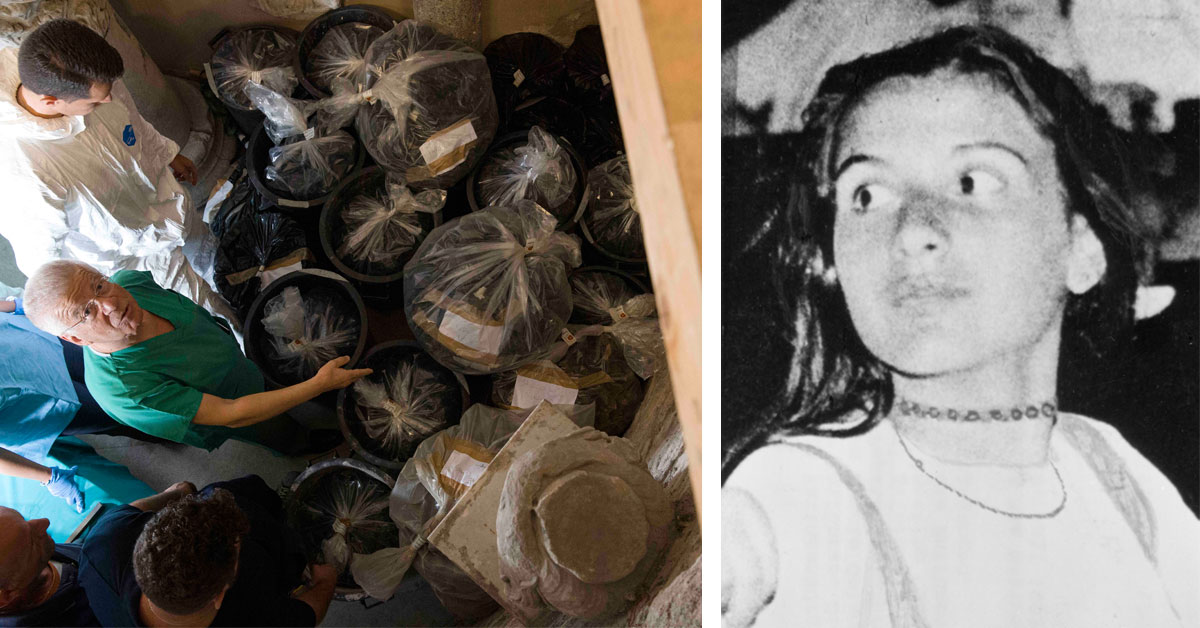 (Left) Workers survey bones taken from an ossuary at the Teutonic cemetery (Right) Emanuela Orlandi is pictured in a photo that was distributed after her disappearance in 1983. (Photos: CNS)

By Cindy Wooden –  Because all of the human bones found in a Vatican cemetery last summer were at least 100 years old, the Vatican City State court officially closed its investigation into the possibility that some of the remains belonged to a teenage woman missing for more than 30 years.

However, a statement from the Vatican press office April 30 said that the judge’s decision still would allow the family of the young woman, Emanuela Orlandi, “to proceed privately with possible additional tests on some of the fragments already found and preserved in sealed containers” at the Vatican police office.
Orlandi, a Vatican City resident and the daughter of a Vatican employee, disappeared in Rome June 22, 1983, when she was 15.

In March 2019, the family’s lawyer said the family had been sent a letter with a photo of an angel above a tomb in the Vatican’s Teutonic Cemetery, which is reserved mainly for German-speaking priests and members of religious orders.

The letter said, “Look where the angel is pointing,” according to Laura Sgro, the lawyer.

She filed a formal petition with the Vatican to investigate the matter and, following her request, the Vatican City State court ordered the opening of two tombs near the angel sculpture.

No human remains were found in either tomb during a search July 11, so the investigators moved to two ossuaries, which are vaults containing the bones of multiple people.

Giovanni Arcudi, a forensic anthropologist, led the scientific investigation of the bones found in the ossuaries, but said he “did not find any bone structure dating back to the period after the end of the 1800s,” the Vatican said.

The forensic team concluded its study of the bones July 28.

However, an expert representing the Orlandi family requested that about 70 bone fragments be catalogued and made available for further testing.