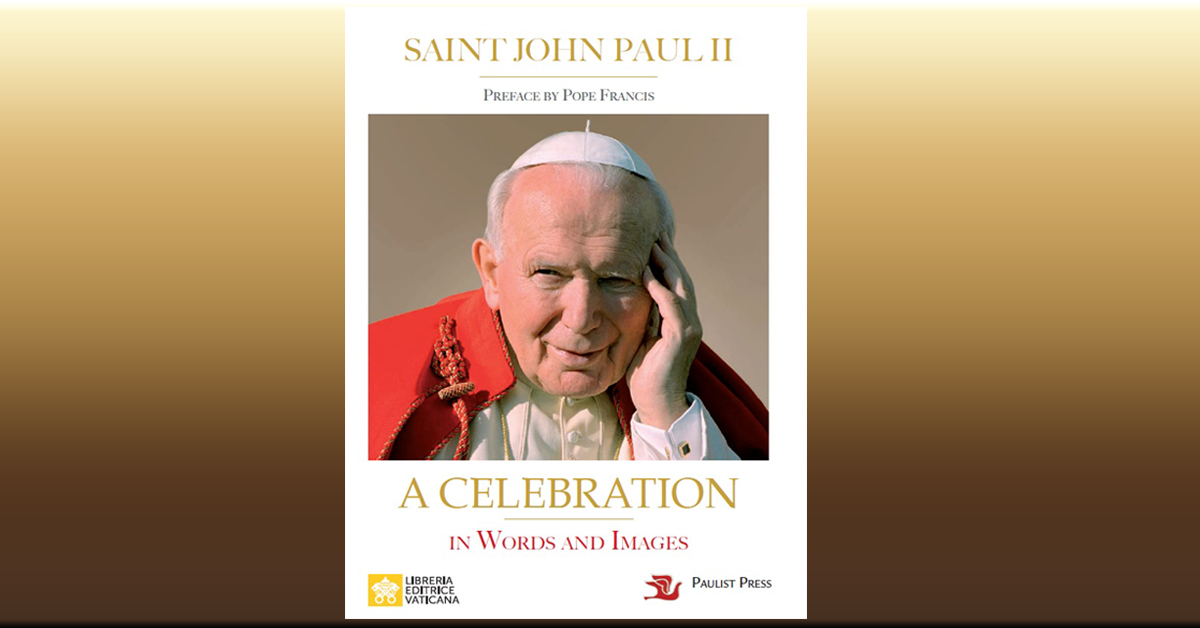 Pictured is the cover of a new volume released by the Vatican Publishing House, together with Paulist Press, commemorating the 100th anniversary of the birth of St. John Paul II. The preface of the book, titled “A Celebration: In Words and Images,” was written by Pope Francis, who called his predecessor “a great witness of faith, a great man of prayer” and a “trustworthy guide for the church at a time of great change.” (CNS photo/Vatican Media)

By Carol Glatz – Pandemic restrictions have upset plans for pilgrimages and major public Masses celebrating the 100th anniversary of the birth of St John Paul II.

But it hasn’t stopped book launches and an online film premiere about the life and legacy of Karol Wojtyla, who was born May 18, 1920, in Wadowice, Poland.

Spanish filmmakers were releasing a new documentary, “Wojtyla: The Investigation,” and Mario Enzler, a former Swiss Guard now living in New Hampshire, has a book out by Newman House Press titled, “I Served a Saint,” reflecting on his service at the Vatican from 1989 to 1993.

While many people will be able to look back and remember key events, iconic images and inspirational teachings from St. John Paul’s life and pontificate, the Vatican publishing house has released a book aimed specifically at the countless young people, “who still know very little or even nothing” about the saint, who died 15 years ago, said Alessandro Gisotti.

“We thought it would be wonderful with a very simple, very slick volume … to be a gift, especially for the younger generation,” Gisotti, the vice-editorial director of Vatican media, said in an online interview with the Catholic television station, Telepace, May 5.

Titled “A Celebration: In Words and Images” of St. John Paul, the 128-page book will also be published in English by Paulist Press.

Pope Francis, who wrote the book’s preface, called his predecessor “a great witness of faith, a great man of prayer” and a “trustworthy guide for the church at a time of great change.”

“So many times over the course of my life as a priest and bishop, I looked at him and prayed for the gift of being faithful to the Gospel as he himself gave witness to,” Pope Francis wrote.

His 84 years of life and 27-year-long pontificate left a “living legacy” to the church today, the pope wrote.

Gisotti said that Pope Francis wants people “to celebrate John Paul, but not in a self-referential way, that is, with just something commemorative, but to tap into the wellspring of this extraordinary man, priest, bishop and pope.”

What people risk forgetting, Pope Francis said, is how much St. John Paul suffered: losing his mother, father, sister and brother all by the time he was 21; living through the Nazi occupation then Stalinist persecution in his country; multiple assassination attempts; and the debilitating effects of Parkinson’s disease.

Despite all that pain, he showed the world his strength rooted in faith, “his smile, the joy, being happy along the road of life despite the difficulties,” Gisotti said.

St. John Paul trusted completely in God and, Pope Francis wrote, the hardships strengthened an already deep faith he received from his mother and father, whose sainthood cause was to begin May 7.

Pope Francis wrote that the message St. John Paul gave to young people during his lifetime needs to resound among young people today: “Do not be afraid. Open wide the doors for Christ.”

Everything he did by teaching and living the faith concretely and resolutely at every moment in life, “this is why it was right to remember on the 100th anniversary of his birth this great holy witness of faith that God gave his church and humanity,” the pope wrote.

Well before the outbreak of the coronavirus across the world, many cities, parishes and groups had planned major public events, pilgrimages and Masses to celebrate the Polish pope.

Poland’s bishops have now asked priests to celebrate a Mass of thanksgiving for the life and pontificate of St. John Paul May 17 – a Sunday – and May 18 – his birthday – in a way that respects public safety guidelines.

The Documentary to premiere online

Since theatres are still closed, Spanish filmmakers decided to hold the premiere of their newest documentary, “Wojtyla: The Investigation,” online to a global audience on May 8.

The film’s producers were committed to not postponing the release of the film because of the pandemic, said Alfredo Panadero, director of marketing and communications for the film’s distribution company, European Dreams Factory.

“We believe it is important to offer the possibility that this film about John Paul II reach every home in order to bring a true tsunami of hope. Many people are suffering, and I am convinced that this film will be of great comfort to them,” he told La Razon on April 27.

“Let us not forget that John Paul II is the pope of the family and hope,” he said.