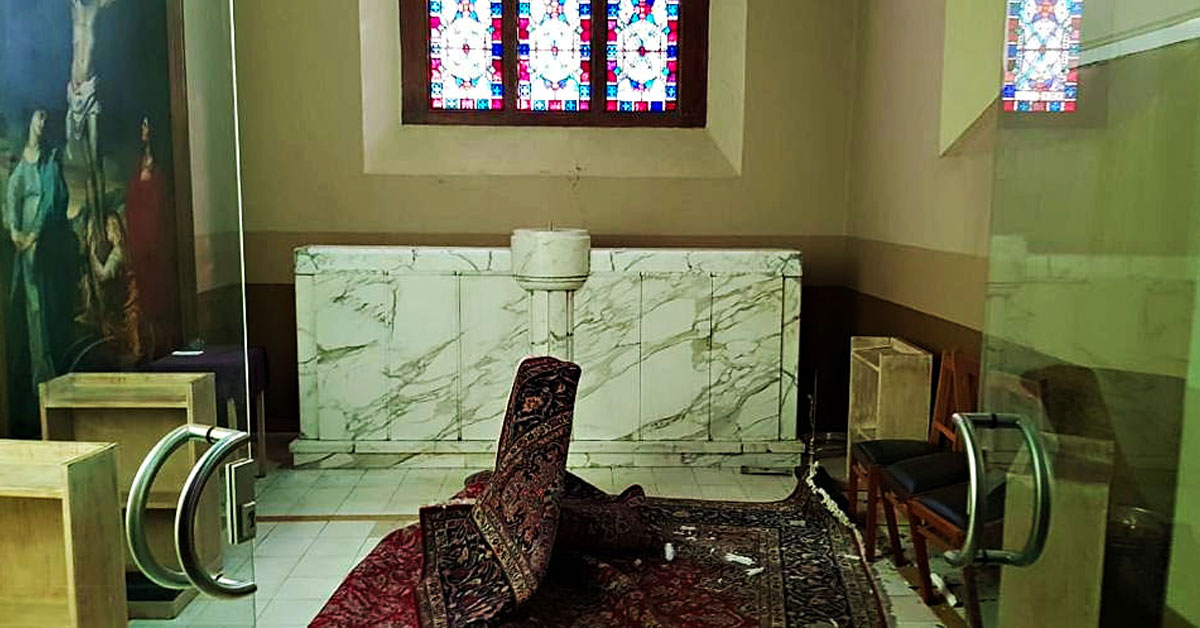 The tabernacle at St Mary’s cathedral in Cape Town after it was robbed.

Some of the items stolen from St Mary’s cathedral in Cape Town last month have been recovered after a young man tried to sell them to a Protestant minister in Khayelitsha.

The minister, who may not be named, was handing out food parcels when a man approached him with an offer to sell religious items.

When he took a closer look, he recognised that these were items stolen from the cathedral and told the young man so.

At that, the man abandoned his loot and ran away, leaving the minister with the items.

“The minister insisted that I come to Khayelitsha and collect these items since he did not want to have them in his house,” said Fr Rohan Smuts, administrator of St Mary’s cathedral.

“I indicated that since it was an active police case, the investigating officer would be contacting him to arrange for the collection of the stolen items and to take his statement,” said Fr Smuts.

But this turned out to be a taxing mission.

“The police contacted the minister but failed to show up at the agreed time and place. The next day, when the police still hadn’t met up with him and taken his statement, he drove into Cape Town and dropped off the items at the Central Police Station.”

The next morning, two detectives arrived at the presbytery in Vredehoek to inform Fr Smuts that “they were in possession of some items and wanted an inventory of all the items that were stolen” in the cathedral burglary, Fr Smuts said.

Frs Luigi Benigni and Smuts were asked to come to the police station to identify the items and take possession of them, but when they arrived, the station had been closed down for fumigation and cleaning due to a positive Covid-19 case.

The next day, one of the investigating officers called to apologise for the inconvenience caused and promised to call back next week to arrange a time. This did not materialise.

“When I had not heard anything back, I sent a WhatsApp message to the detective in charge of our case expressing our displeasure that nothing had materialised since some of the stolen items had been returned,” Fr Smuts said.

“I had as yet not completed the insurance claim form as I did not want to claim for anything that may have been found. Within a minute I got a response that my message had been forwarded to the commanding officer and that I should have a response to my query, “said Fr Smuts.

Eventually the two priests were able to access the evidence room.

Also recovered were a ciborium that was in the tabernacle, a chalice and paten set, a paten dish and the large sanctuary lamp.

All these items, including the tabernacle that was broken into various pieces, will need to be fixed and restored by various artisans.
The stolen microphones, as well as the pyx and lunette that were in the tabernacle, have not been recovered.

Frs Smuts and Benigni expressed their gratitude and appreciation to the countless individuals who reached out to them, offering their prayers and financial support.

“When news of the recovery of the stolen items were beginning to make the rounds, someone aptly said: ‘This is what happens when you have a praying community,’” Fr Smuts said.