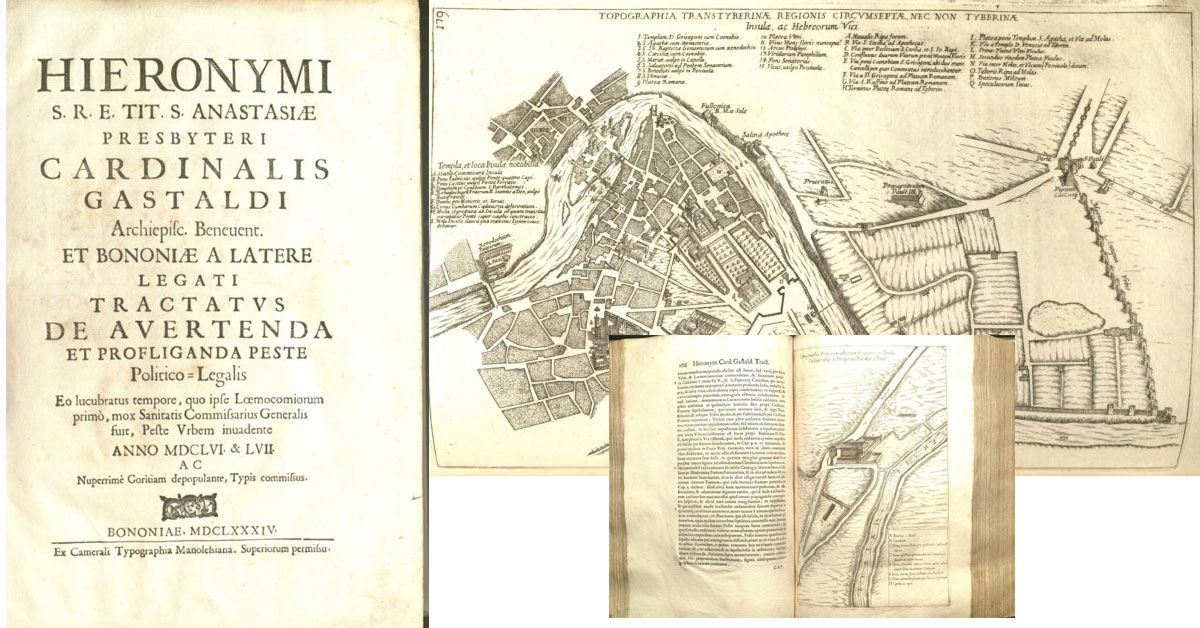 This is the cover of Cardinal Girolamo Gastaldi’s 1684 manual with guidelines for responding to a plague. The cardinal’s guidelines were based on his experience during the plague in 1656 when Pope Alexander VII put him in charge of running Rome’s lazarettos, where people were separated for isolation, quarantine and recovery. (CNS photo/courtesy Rare Book Collection, Lillian Goldman Law Library, Yale Law School)

By Carol Glatz – The Catholic Church’s acceptance of a ban on gathering for public worship and following other painful Covid-19 restrictions reflects its long-held understanding that faith, service and science are not at war with one another.

The church has had centuries of experience with the do’s and don’ts during a pandemic – and far from being antagonistic, it has often been at the forefront of endorsing public health measures considered to be the most effective at the time for containing contagion.

One of the most important early sets of public health guidelines for quarantine was published by Cardinal Girolamo Gastaldi in 1684.

The manual’s “counsel seems very familiar in today’s Rome: Protect the gates; maintain quarantine; keep watch over your people. Also, close sites of popular aggregation, from taverns to churches,” he wrote in  “A History of Disease, Faith and Recovery in Rome.”

The cardinal’s expertise was based on his experience during the plague of 1656 when Pope Alexander VII put him in charge of running Rome’s network of lazarettos, which were hospitals where people were separated for isolation, quarantine and recovery.

The strict system of forced containment was key to protocols endorsed by the pope’s Congregation of Health, which Pope Urban VIII established in 1630 to spring into action whenever an epidemic hit.

While issuing and enforcing regulations was easier in the Papal States, since church and state powers were one, “a relationship of mutual collaboration” between the church and public institutions was often the norm elsewhere, although the two sides were not always in sync or free of tension, said Marco Rapetti Arrigoni.

But whatever circumstances church leaders found themselves in during plagues and pandemics, many still found a way to minister with creativity, courage and care, prudently following practices believed to keep themselves and others safe from contagion, he told Catholic News Service.

To highlight how current restrictions on public worship and administering the sacraments have had numerous precedents throughout church history and should not be seen as conspiratorial attacks against religion, Rapetti Arrigoni published a number of detailed historical accounts online in Italian at breviarium.eu documenting the church’s response to outbreaks of disease over the centuries.

He told CNS how diocesan bishops were quick to introduce measures thought effective at the time to stop the spread of disease with restrictions on the assembly of the faithful and increased social distancing, hygiene, disinfection and ventilation.

The church had to come up with new ways to administer the sacraments and meet the needs of its faithful, he said in an email response to questions in early May.

In Milan during the plague of 1576-1577, St. Charles Borromeo had votive columns and altars built at crossroads so quarantined residents could venerate the cross atop the column and participate in eucharistic celebrations from their windows, he said.

The saint encouraged individuals and families to pray and had church bells signal seven moments throughout the day for common prayer, preferably recited aloud from an open window.

He assigned certain priests to go to particular neighbourhoods. When a resident signalled the desire for the sacrament of reconciliation, the priest would set up his portable leather stool outside the penitent’s closed door to hear confession.

Different utensils had long been used over history to administer the Eucharist while assuring social distancing, including long pincers or a flat spoon and a fistula or straw-like tube for consecrated wine or for administering the viaticum. Vinegar or a candle flame was used to disinfect the utensils and the minister’s fingers.

In Florence in 1630, Rapetti Arrigoni said, Archbishop Cosimo de’ Bardi mandated priests wear waxed clothing – in the belief it acted as a barrier to infection – use a piece of cloth draped in front of them when offering Communion and affix a curtain of parchment in the confessional between the confessor and penitent.

He said even one of his own ancestors, Archbishop Giulio Arrigoni of Lucca, Italy, enforced difficult norms proven helpful in the past when cholera hit in 1854, as well as visited the sick, distributed alms and provided spiritual comfort wherever possible.

The biggest mistakes communities made, he said, were minimising or miscalculating the seriousness of the disease when cases first emerged and the subsequent inaction or poor response by authorities.

There were also big risks in relaxing restrictions too quickly, he said, like in the Grand Duchy of Tuscany when it was hit by the plague in 1630.

Public officials had debated for so long that a plan for a “soft” quarantine wasn’t implemented until January 1631 – more than a year after the first signs of disease were seen in the fall of 1629.

In the plan, numerous people were exempt from quarantine, particularly merchants and other professionals, in order to prevent the powerful Florentine economy from collapsing, and many commercial venues, including hostels and taverns, were allowed to resume business after three months of closure, he said.

The “plan” resulted in the epidemic lasting another two years, Rapetti Arrigoni said.

Even today, the Catholic Church and other religions have a critical role in caring for those hit by disease and helping end epidemics, said Katherine Marshall, a senior fellow at Georgetown University’s Berkley Center for Religion, Peace and World Affairs, and executive director of the World Faiths Development Dialogue.

When trusted by their communities, religious leaders are vital for disseminating important health protocols, correcting false information, being role models and influencing people’s behaviour, she said during an April 29 webinar on the role of religion and the Covid-19 pandemic, sponsored by the International Partnership on Religion and Sustainable Development.

“Their roles can be falsely presented as ‘faith versus science,’ as ‘faith versus secular'” authority, she said. But religious leaders can forge partnerships with governments and health experts, and help build effective, coordinated efforts for relief and rebuilding.