What We Are Growing at St John Vianney 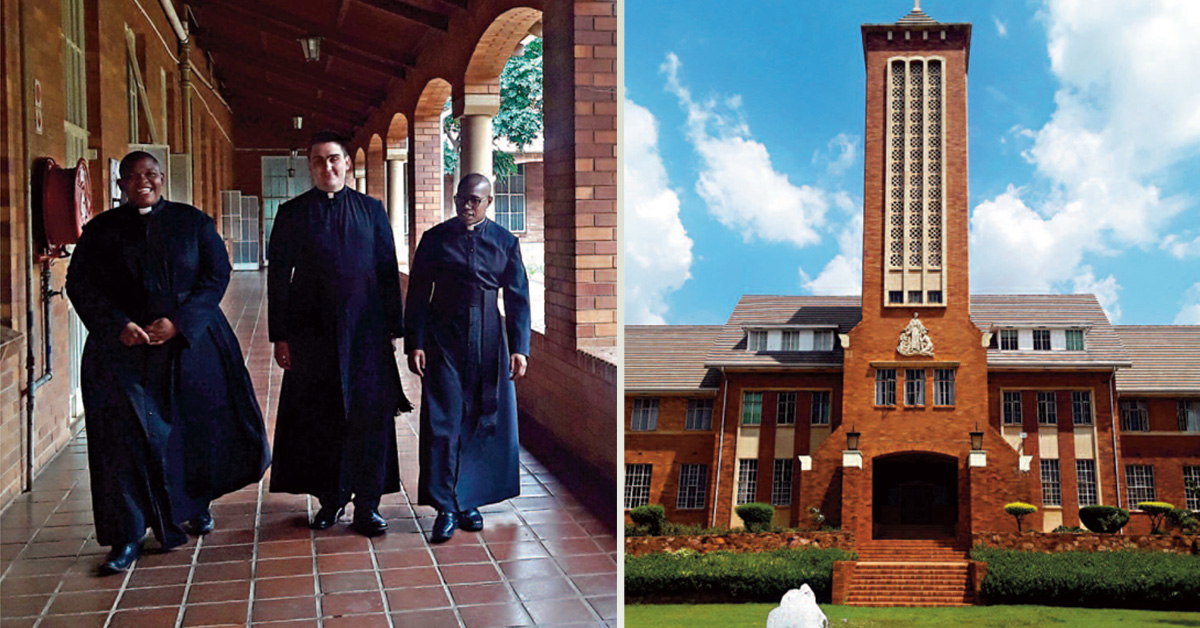 (Left) Three men on the threshold of becoming priests: Tshebang Dithipe, Jason Lottering and John Legodi. (Right) St John Vianney Seminary in Pretoria, one of the largest in Africa. (All photos: Lucy Rubin)

Saint John Vianney Seminary is probably one of the most beautiful centres of learning for priestly formation in Africa.

Located at the top of Main Street in Pretoria’s Waterkloof suburb, it is surrounded by many other Catholic institutions, most notably its new neighbours: the headquarters of the Southern African Catholic Bishops’ Conference, Khanya House. And just up the road is the apostolic nunciature, the Vatican’s embassy.

Established in 1951, St John Vianney Seminary currently has about 130 seminarians. The students do not pay fees and depend on Church initiatives and donations to continue.

They come from all over South Africa and from other parts of our continent—such as Namibia, Zimbabwe, Uganda and Nigeria—with the hope that after eight years of study and living in community, they will emerge as ordained ministers to and for the Catholic faithful.

Speaking to three seminary “veterans”—John Legodi, Jason Lottering and Tshebang Dithipe— it was clear that living with their brothers in Christ is as much a journey in forming their characters as is accomplishing a bachelor of philosophy and theology, learning Greek and Latin, and studying biblical archaeology.

All three say they did not have a Damascene experience that brought them to study for the priesthood. The call slowly but surely grew through their teenage years of attending Mass and catechism.

They felt there was a desire to serve God which they wanted to realise through becoming priests. Tshebang noted his grandmother as being the inspiration for this vocation. He is a well-known singer in the choir. It is said that when he sings, he holds the floor and lifts the roof, and nobody goes home! For John, the key to his vocation is humility. Being a priest, he said, is not about success but being faithful to God.

The day usually begins at 6:00 with morning prayer and meditation.

Mass is celebrated every day in the chapel. Within the community itself there are many duties, on top of attending classes and study groups. Dinner is at 18:30, followed by evening prayers.

The seminarians have a common room where current events are watched on TV, but they have a maximum of an hour and a half in the evenings for this. For recreation there is a gym and swimming pool. Most trips outside the seminary are training- or service-related.

As part of their Catholic formation they must attend a joint ecumenical forum at UNISA every year, giving them the opportunity to meet ministers of different faiths in the community. The seminarians have a student council, and a boardroom for fraternal correction. They have formators—spiritual counsellors—with whom they regularly pray.

The formators also scrutinise the attitudes of their charges, and when necessary challenge them.

During their eight years of study and preparations, and sometimes longer, the future priests have to do community service. For six months they are placed in a parish to assist with catechesis and various other duties in the life of the parish.

Jason was placed to assist the chaplain of Weskoppies psychiatric hospital in Pretoria. John went to St Benedict’s in Polokwane, and Tshebang to Sacred Heart cathedral in Pretoria. “I will go where I’m sent,” said John.

St John was just a simple parish priest in the village of Ars in France. And yet, immense numbers of people flocked to his church in this rural place in post-revolutionary France. They were attracted by this holy priest who spent 16-18 hours a day in the confessional as people from all over France queued outside to receive the sacrament from him. The Curé d’Ars, as he is known, was canonised in 1925.

Four years later he was declared the patron saint of priests. The seminarians value the boundaries and discipline of seminary life. John noticed that without it, he found that his prayer life suffered while on holiday. Tshebang noted that he must submit to his superior, and one day he, too, would expect the same respect to be given to him. Jason said authority is about servant leadership.

What this might mean is having to do the dirty work and praying that your brothers will follow suit.

And at the centre of their service is the Eucharist, not only in their daily lives but as the offering they bring to the towns or cities where they will go. Besides establishing a eucharistic community spirit, Tshebang hopes to make God relevant to people in their life situations. “If we move away from God, we lose hope. Look at Mother Teresa: she suffered, had doubts. I am inspired by that.” John wants to be a counsellor.

He wants to “be blessed and broken”, and to serve the needs of the community in whatever form that may take. Jason believes in the reevangelisation of the people, noting that the Mass is not just to be a Sunday practice but that people must fully assimilate the core Gospel values into their lives.

The seminarians noted that studying for the priesthood is a long road, and some fellow students have left that path to follow the vocation to marriage. In the end, they said, faithfulness to your heart is the key to whatever you choose.