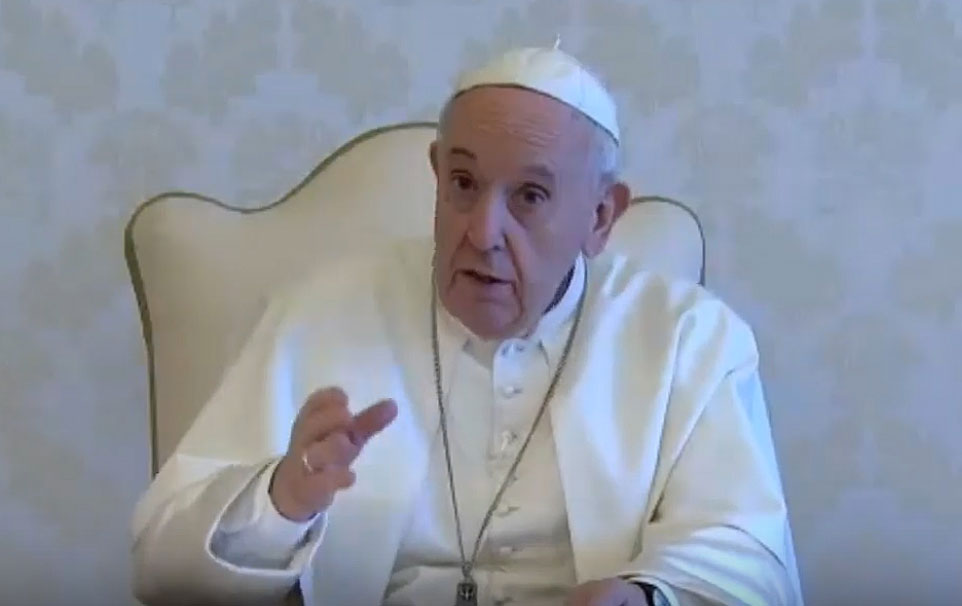 By Carol Glatz – People experiencing crises in their communities need to be accompanied so the experiences can be lived as an important opportunity to build something new, Pope Francis told teenagers, parents and teachers meeting online to celebrate World Environment Day.

Crises are part of life – much like a flower pot that breaks because the plant’s roots need more room to keep growing, he said in Spanish in a video message June 5.

“But that is life – it grows, it breaks,” and it would be a terrible thing not to have this kind of crisis. When everything seems “flawless, tidy, starched,” he said, it would mean humanity is “very, very sick” or asleep.

The original meaning of crisis, he added, was not just “rupture,” “opening” and “danger,” but also “opportunity.”

So if a crisis calls people to a new opening or opportunity, the danger lies in not being taught to connect with or how to relate to this new opening, he said.

“That is why crises are dangerous if we are not accompanied well, because we can become disoriented” and lose the way, he said. This applies to all types of situations, from personal crises to social or marital crises, he added.

The pope made his remarks in a prerecorded video to young people, teachers, parents and political leaders from different parts of the world taking part in a “cyber meeting” sponsored by the Scholas Occurrentes Foundation.

Scholas Occurrentes is active in 190 countries, bringing some 500,000 schools and educational networks of all denominations together to encourage social integration ‎and the culture of encounter among high school students through the arts, sports and technology.

Latin for “schools for encounter,” Scholas Occurrentes was launched by Pope Francis in Argentina in 2001, when he was archbishop of Buenos Aires. As pope, he made it a foundation in 2013.

The pope said in his video message that Scholas “was born out of crisis.”

However, its philosophy is not to use violence to fight the culture or to surrender and be resigned to how things are or to just complain about how bad things are.

Scholas emerged to go out and listen to the hearts and minds of young people and cultivate something new, he said.

“Scholas leans outward through the cracks of the world and not with its head, but with its whole body to see whether there is a new answer” behind that new opening.

This is what education is, the pope said.

Education must listen, create culture and teach people to celebrate life, otherwise it is not education, he said.

“That is why in this new crisis that humanity is facing today, in which culture has shown it has lost its vitality, I want to celebrate that Scholas, as a community that educates,” will now be opening up an initiative called “the University of Meaning,” because educating is teaching how and looking for the meaning of things.

He told young people to “keep on planting and harvesting with a smile, with risks, but all together and always hand in hand to overcome any crisis.”

Pope: Every Believer is a Precious Stone