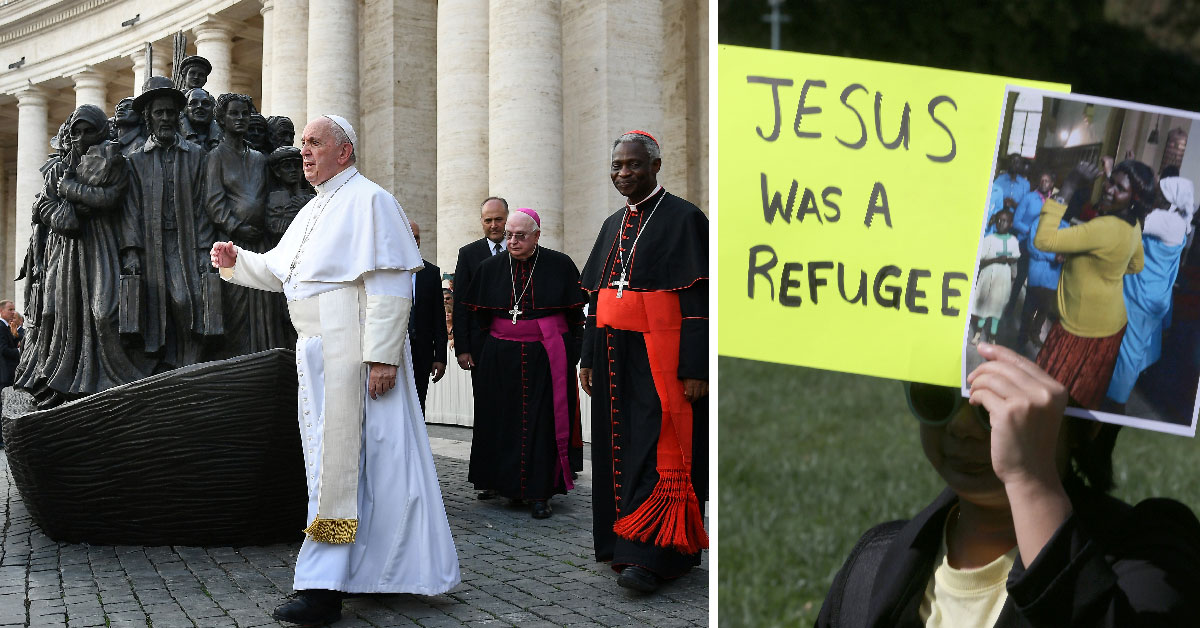 Pope Francis attends the unveiling of a sculpture depicting a group of migrants of various cultures and from different historic times, following a mass for World Day of Migrants and Refugees, at St. Peter’s Square at the Vatican. Also pictured is Cardinal Peter Turkson, prefect of the Dicastery for Promoting Integral Human Development. (CNS photo/Vincenzo Pinto, Reuters pool). A protester holds up a sign during a demonstration by faith leaders. (CNS photo/Bob Roller)

The bishops of Southern Africa have called on the faithful to avoid getting involved in a social media campaign under the banner #PutSouthAfricaFirst, which they say borders on hate speech in its call for “discrimination of non-South Africans in the economic and social sectors, among others”.

“Xenophobia, particularly in South Africa, has been a recurring problem and, as the bishops of the Catholic Church, we condemn any form of hostility towards a sister or a brother,” Archbishop Buti Tlhagale of Johannesburg said in a statement issued on behalf of the SACBC to mark World Refugee Day (WRD) on June 20.

The bishops called on Catholics and South Africans generally not to be involved in campaigns such as #PutSouthAfricaFirst as these go against the values of the Gospel and the Social Teaching of the Church.

Instead, they encouraged people to be fully involved in the theme of this year’s WRD celebration, “Everyone can make a difference. Every action counts”.

“It is in each one of us doing his or her bit to make a difference in the life of a refugee, that we can improve their protection and wellbeing,” said Archbishop Tlhagale, the SACBC’s liaison bishop for Migrants and Refugees.

The archbishop reiterated Pope Francis’ call for the protection and integration of refugees and forcibly displaced persons in host communities.

“As bishops of the Catholic Church in Botswana, South Africa and Eswatini, we are aware of the amount of work that has been done and continues in responding to the needs of the almost 80 million refugees and other forcibly displaced people, most of whom live in deplorable conditions,” said Archbishop Tlhagale.

“A lot, however, still needs to be done, not least on the protection and integration of refugees and other vulnerable people who have been forcibly displaced,” the archbishop added.

The statement further highlighted dismay at the exclusionary measures that have been used by many governments in their response to the socio-economic needs of the vulnerable and poor during the time of Covid-19.

“The 2020 WRD comes at a time when the whole world is faced with the Covid-19 pandemic that has ravaged many lives all over the world, exposed many inequalities, injustice and our broken humanity. We commemorate the lives of refugees, and are aware that the pandemic has added an extra burden and challenge on their lives,” Archbishop Tlhagale said.

“We would like to remind them that Covid-19 knows no borders. We are all faced with the same pandemic,” he added.

“Our humanity and our religious belief do not allow us not to share the little we have with our neighbour in need.

“As Catholic bishops, we are concerned about their wellbeing and implore host countries not to exclude them when responding to the socio-economic needs, especially of the vulnerable during this time,” Archbishop Tlhagale said.

“We particularly ask the human family to exercise the four verbs of Welcoming, Protecting, Promoting and Integrating them, as we have been encouraged by Pope Francis,” the statement said.

Fr Rampe Hlobo SJ of the Jesuit Refugee Service (JRS) in South Africa noted that according to a report released last week by the United Nations High Commissioner for refugees, more people than ever before have been forcibly displaced.

The report noted that the number of forcibly displaced persons has doubled in the past decade as a result of persecution, conflict, violence, human rights violations or events seriously disturbing public order. Almost 80 million people have now been forced to leave their homes.

“These include refugees, asylum-seekers who have left their countries, and internally displaced people who are still in their native countries,” said Fr Hlobo.

“Reacting to this unparalleled level of displacement, the UHCR’s Fillipo Grandi slated what he labelled the consequences of hypocrisy and indifference that play out tragically in the lives of the uprooted and traumatised,” he noted.

Mr Grandi, the priest noted, said that 1% of humanity now lives in forced exile because of this indifference.

“It is this culture of indifference that Pope Francis has on so many occasions criticised, that has led to the number of forced exiles to double in the last ten years,” Fr Hlobo said.

The SACBC statement noted the destructive nature of armed conflict in Africa.

“On this WRD we equally remind ourselves of the endless wars, persecutions and violations of human rights that have forced many to leave their homes and countries, in search of protection and safety,” the statement said.

The SACBC said that “the loud guns that have been reverberating all over the continent of Africa” and often robbing children of their youth have caused many of these ills.

The bishops’ conference joins and supports the African Union in its call to silence the guns in Africa.

“These guns have done enough damage to our continent, our people, and retarded their development,” Archbishop Tlhagale said.

“Unless there is stability and peace in Africa, where justice and respect for human rights prevail, we cannot have development and there will certainly be no prosperity,” he noted.

“Consequently, people will always be forced to leave their homes in pursuit of protection and a better life. We call on AU member-states and the international community to help in silencing the guns in Africa,” the archbishop said.