Cardinal Zen: I Am Prepared For Arrest Under Hong Kong Security Law 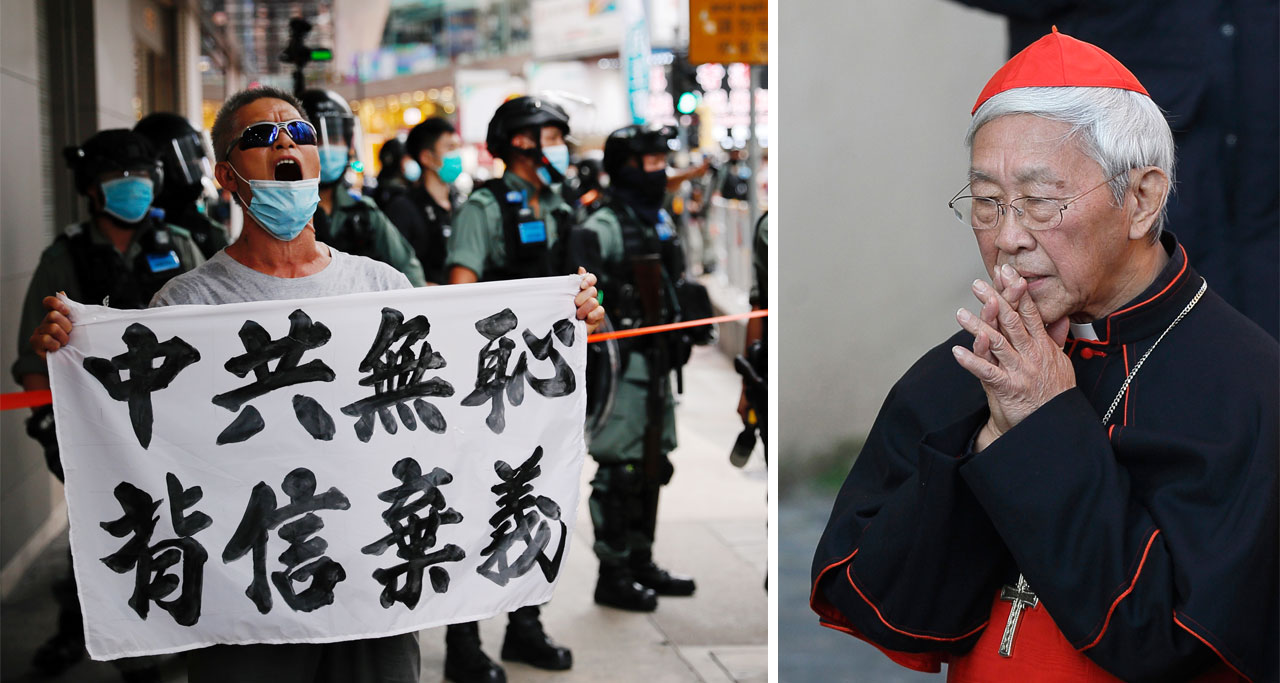 (Left) A man holding a banner reading “Chinese communist party is shameless, break the promises,” during a protest against the new national security law in Hong Kong July 1, 2020. (CNS photo/Tyrone Siu, Reuters) (Right) Cardinal Joseph Zen Ze-kiun, retired bishop of Hong Kong, says he will “endure all the suing, trials and arrests” if he is targeted by a new security law. (CNS/Paul Haring)

Cardinal Joseph Zen Ze-kiun has said that while he will remain prudent, he is prepared to suffer arrest and trials under Hong Kong’s sweeping new national security law.

“If right and proper words are considered against their law, I will endure all the suing, trials and arrests. Numerous predecessors have endured similarly,” the 88-year-old cardinal said in a video posted on his Facebook page. His remarks were reported by ucanews.com.

“Perhaps they are truly insane. Who knows? Let them be then. Isn’t there a saying, ‘Those whom God wishes to destroy, he first makes mad’?”

The controversial law was rushed through the Standing Committee of China’s National People’s Congress June 30, the eve of the 23rd anniversary of the handover of Hong Kong from Britain to Beijing.

Cardinal Zen’s fears that the new laws could affect religious freedom in the city contradict the view of Hong Kong’s apostolic administrator, Cardinal John Tong Hon, who in late June claimed the laws would have no effect on religious freedom.

But in a late-June statement, International Christian Concern said that under the new law, “vocal Hong Kong clergy who have been supportive of Hong Kong’s democracy movement, such as Cardinal Joseph Zen and Auxiliary Bishop Joseph Ha Chi-shing, could be extradited to mainland China to be tried, since Beijing considers them to be threats to the regime.”

Hong Kong Diocese’s Justice and Peace Commission also signed an open letter with 85 other social justice organizations, decrying the law ahead of its implementation, ucanews.com.

International Christian Concern warned that Beijing considers the mass protests that began last June as terrorist acts and any calls for Hong Kong’s independence from China as acts of sedition.

The group noted that China’s notorious legal system and its lack of transparency “can easily criminalize anybody and place them in jail,” adding that many Chinese pastors and Christians are now imprisoned on trumped-up charges such as subversion of state power, illegal border crossing and illegal business operation.

“Many fear with the passing of this legislation, Hong Kong will forever lose its ‘one country, two systems’ status and merely turn itself into an ordinary coastal city in China,” it added.

Joshua Rosenzweig, Amnesty International’s deputy regional director for East and Southeast Asia and the Pacific, said the passing of the national security law “is a painful moment for the people of Hong Kong and represents the greatest threat to human rights in the city’s recent history.”

He added: “From now on, China will have the power to impose its own laws on any criminal suspect it chooses. The speed and secrecy with which China has pushed through this legislation intensifies the fear that Beijing has calculatingly created a weapon of repression to be used against government critics, including people who are merely expressing their views or protesting peacefully.”

The new laws potentially target Catholic schools, charities and organizations through their focus on nongovernmental organizations. The Hong Kong church has scores of schools ranging from preschools through to high schools, educating mainly non-Catholics.

Ucanews.com reported the church also has a significant network of charities led by its umbrella charity organization, Caritas.

Article 9 of the legislation says the Hong Kong government will “take necessary measures to strengthen public communication, guidance, supervision and regulation” of schools, social organisations, the media and the internet.

The legislation, which took effect the evening of June 30, will apply to Hong Kong citizens and foreigners deemed to have broken laws both inside and outside the territory.

Even people transiting through Hong Kong are at risk of arrest.

Foreigners can be deported if authorities decide not to prosecute them to the full extent of the legislation, which has penalties as severe as life imprisonment.