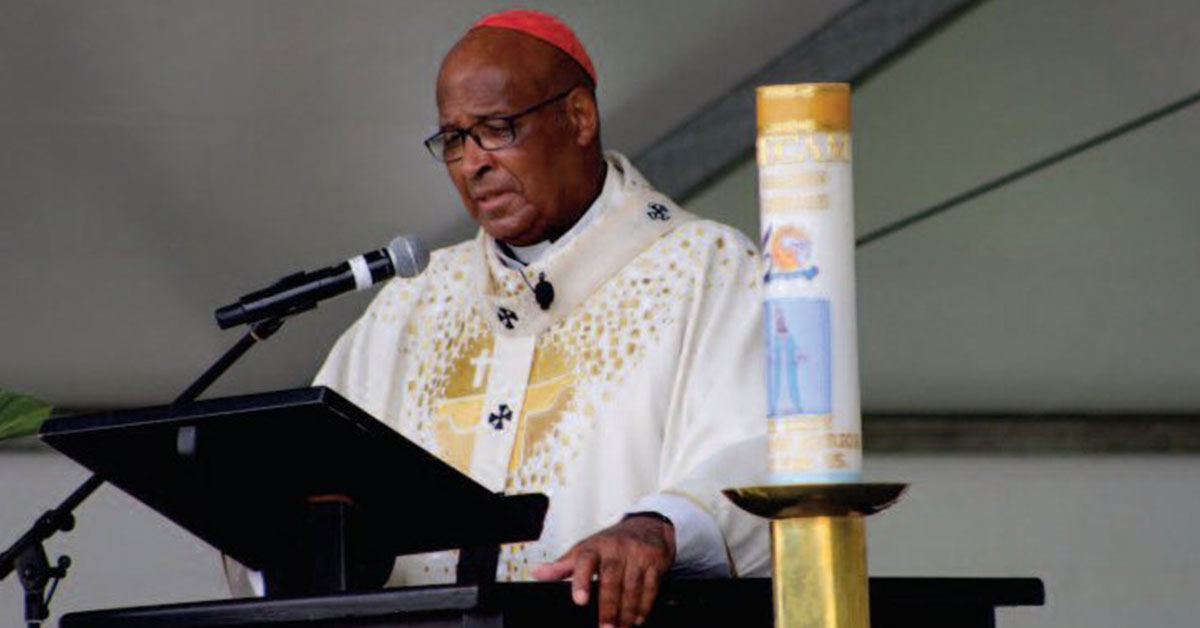 By Dawn Haynes – In July 26, 1970, Cardinal Wilfrid Napier of Durban celebrated his first Mass as a newly-ordained priest at his home parish our Lady of Lourdes parish, in Franklin, East Griqualand, and 2020 marks his 50th jubilee.

Having trained in Ireland and Louvain, Belgium, he was ordained by his fellow Franciscan, Bishop John Evangelist McBride of Kokstad.

Young Fr Napier immediately threw himself into learning isiXhosa, first at Hardenberg mission, then at Lumko in Queenstown diocese.

Wherever he was assigned he spent a great deal of time getting to know the area and the people.

Cardinal Napier said his focus has always been the importance of family life and this bears testimony to his own family, especially his father.

He remembers clearly the weekend of his first Mass: “At the end of June 1970 I returned to South Africa from a week’s retreat at the [Franciscan] friary at Rossnowlagh in the west of Ireland, and was met at Durban airport by my parents.

“Due to a delayed arrival of the plane from Heathrow, I arrived too late to connect with the scheduled flight from Johannesburg to Durban. This meant that the plan for me to baptise Sean and Seamus, the twin babies of my eldest brother Peter, at Franklin en route to my home on the farm became rather complicated,” the cardinal added.

“No problem to my dad, Tom. For him it was a simple matter. Whatever the hour of arrival at Franklin, the baptism would take place at once. So I found myself doing my first baptism back home at 19:30 the night I arrived from Europe after a long and tiring flight.

“For Tom Napier the matter was very simple: his twin grandsons were not going to spend another day in the state of Original Sin! Thus Sean and Seamus joined the Christian family at the earliest possible moment after my arrival home, he said.

“The lesson to be learned: even if he is to be ordained a priest, a son must always listen to his father!”

The cardinal said this is one of his guiding rules, and he has always tried to apply this to his ministry and listen to God the Father.

Having been ordained on the feast of St James is hugely significant to him. Lying between the feast days of Mary Magdalene and Martha, this means he entered the priesthood surrounded by three of Jesus’ good friends. He is thus constantly reminded that as a priest, he is also a friend of Jesus, Cardinal Napier said.

He sees his service as thus twofold, professional and homely, and bases this on Jesus’ family.

“At the wedding feast in Cana, his mother Mary came to him and told him that the wine had run out. He listened to her and performed his first miracle by changing the water into wine. Jesus respected and listened to his mother.”

The influence of St Joseph is not well recorded in the Bible, but he was obviously a good husband and a good father, the cardinal observed. He cared for Mary and kept her safe. He protected his baby son by moving from Bethlehem to Egypt and then to Nazareth.

He taught Jesus the skills of his carpenter’s trade as any father teaches his son. Although he was in the background, St Joseph was a positive influence on Jesus as he grew to manhood, Cardinal Napier said.

“St Joseph reminds me of my own father who was a very practical man. Nowadays, being a father is really challenging. With the problems of domestic abuse, loss of masculinity and confused roles, men need to turn more to St Joseph to get inspiration and guidance,” he said.

Cardinal Napier sees his 50-year jubilee as a new start.

“As all our lives are changing dramatically during 2020, we need to take a new look at what to do now. As a priest, I see the need to keep the example of St Joseph in my background and the servant/leadership example of Jesus in the foreground.”