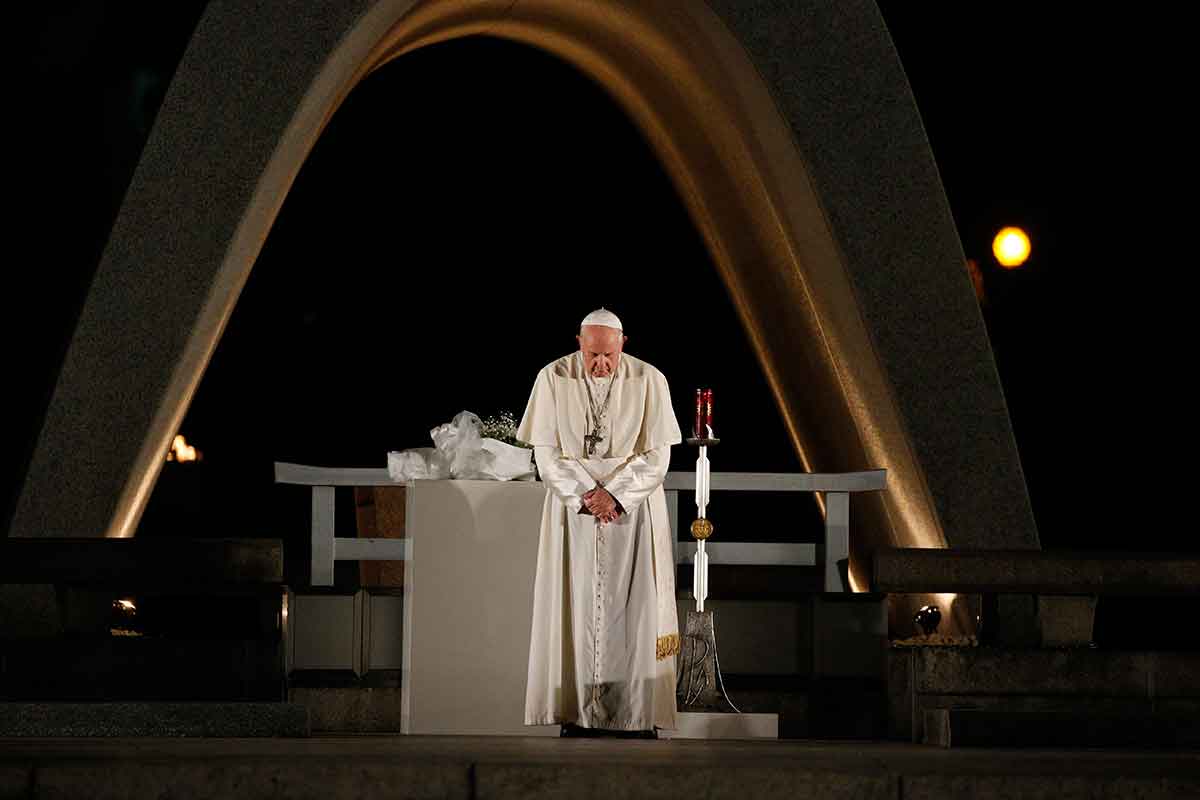 Pope Francis participates in a moment of silence during a 2019 meeting for peace at the Hiroshima Peace Memorial in Japan. August 6, 2020, marked the 75th anniversary of the world’s first nuclear attack. (CNS photo/Paul Haring)

By Tony Magliano – Wars have always caused needless suffering, destruction and death. But 75 years ago, the hell of war reached a new all time immoral low when on August 6, 1945 a United States Boeing B-29 bomber dropped an atomic bomb on the Japanese city of Hiroshima instantly killing over 70,000 – mostly civilian – children, women and men.

And again three days later, on August 9, 1945 the U.S. dropped a second atomic bomb, this time on the Japanese city of Nagasaki, killing at least 60,000 people – again mostly civilians.  Nagasaki was the centre of Japanese Catholicism.

When one considers the tensions between India and Pakistan, Israel and certain Middle East nations, the U.S. and China, the U.S. and North Korea and the U.S. and Russia, the chances of nuclear war are dangerously real.

Russia and the U.S. possess over 90 percent of the world’s nuclear arsenal. And each nation has several hundred nuclear weapons aimed at each other – programmed at “launch-ready alert” or otherwise known as “hair-trigger alert.”

Not only is there a real possibility of intentional nuclear war between both countries, but also due to sloppy communications and/or computer errors, Russia and the U.S. have come within minutes of accidental nuclear war more than once.

Furthermore, last year the U.S withdrew from the 1987 Intermediate-Range Nuclear Forces (INF) Treaty which had required Russia (then the Soviet Union) and the U.S. to eliminate all of their nuclear and conventional ground-launched ballistic and cruise missiles with ranges of 500 to 5,500 kilometres.

“Mutual assured destruction” – appropriately known as MAD – is the military doctrine which attempts to reason that since the undeniable massive devastation caused by a nuclear war between the U.S. and Russia – not to mention devastating the rest of the world – would be so great that neither nation would start such a war, is catastrophically foolish. It is nothing short of playing Russian roulette with the human race.

Add to these dangers the U.S. Nuclear Posture Review’s statement that the U.S. will continue its policy to be the first to initiate a nuclear attack if it decides that its “vital interests” and those of its “allies and partners” are at risk.

On Jan. 23, 2020 the Bulletin of the Atomic Scientists, moved their famous Doomsday Clock to 100 seconds before midnight – warning how extremely near humanity is to a global catastrophic midnight posed by the increasing threats of nuclear war and climate change.

“We are now expressing how close the world is to catastrophe in seconds – not hours, or even minutes. It is the closest to Doomsday we have ever been in the history of the Doomsday Clock. We now face a true emergency – an absolutely unacceptable state of world affairs that has eliminated any margin for error or further delay,” warned Rachel Bronson, Ph.D., president of the Bulletin of the Atomic Scientists (see: https://bit.ly/2T55YkP).

In his message given at Nagasaki’s Atomic Bomb Hypocenter Park last year, Pope Francis said, “One of the deepest longings of the human heart is for security, peace and stability. The possession of nuclear weapons and other weapons of mass destruction is not the answer to this desire; indeed they seem always to thwart it.”

And with prophetic warning Pope Francis declared: “The use of atomic energy for purposes of war is immoral, just as the possession of nuclear weapons is immoral, as I already said two years ago. We will be judged on this” (see: https://cutt.ly/Ne1emEG).