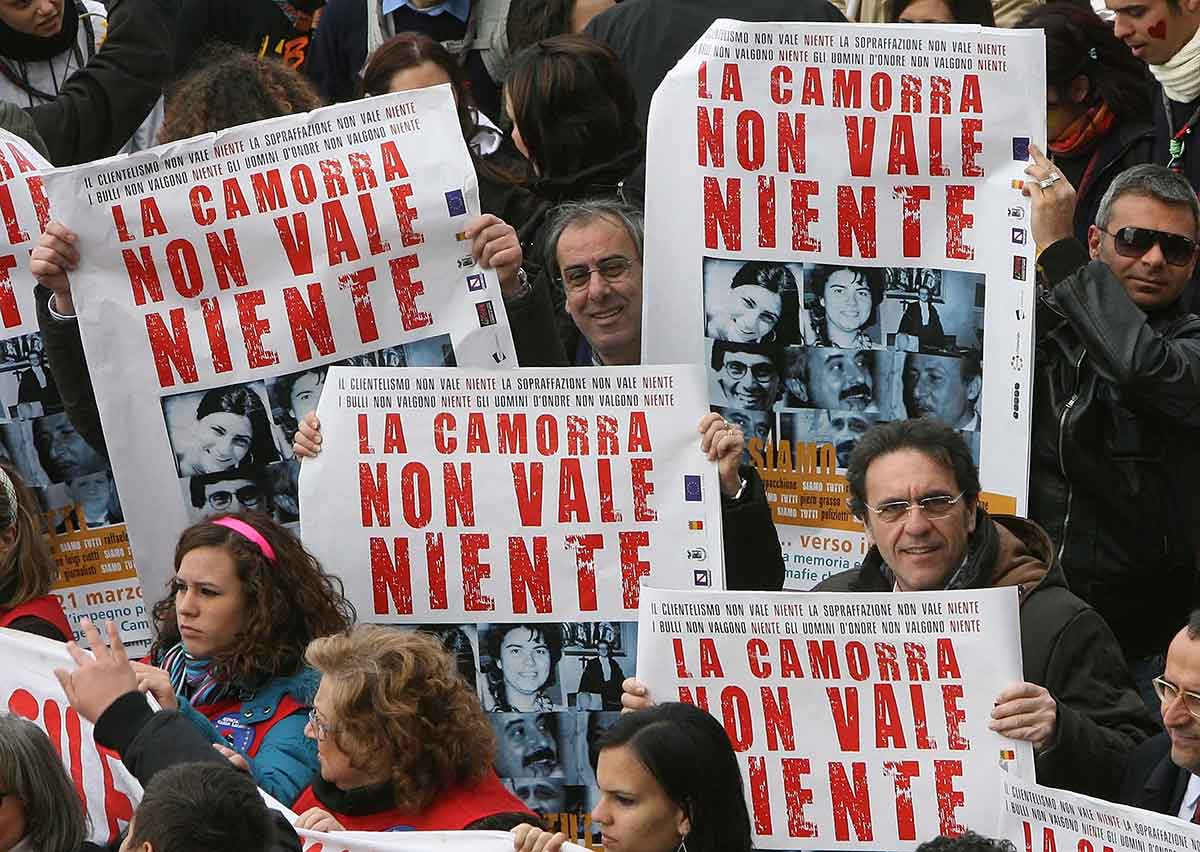 Demonstrators are pictured in a file photo holding banners during a  demonstration in Naples, Italy, to commemorate the victims of the mafia and demand an end to the stranglehold of organised crime on southern Italy. (CNS photo/Ciro De Luca, Reuters)

By Carol Glatz – Given the many criminal organisations and gangs worldwide that have distorted the true role and image of Mary, a pontifical academy has unveiled a new department dedicated to fighting “this deviant spirituality.”

The Pontifical Marian International Academy will be working with the Italian government and law enforcement on a number of initiatives through the department dedicated to the “analysis, study and monitoring of criminal and Mafia-related phenomena” and to promoting “a theology of liberation from the Mafia,” according to its website.

“Marian devotion is a religious-cultural heritage whose original purity needs safeguarding,” the pope wrote, according to an excerpt of the letter, published by Vatican News.

Protecting the heritage includes “liberating it from superfluous elements, powers or social conditioning that do not comply with the Gospel criteria of justice, liberty, honesty and solidarity,” the pope wrote.

In particular, the pope “noted with pleasure” the creation of the new department and a conference the academy will hold on September 18 with other church leaders and public entities for finding effective ways to raise awareness and begin a cultural shift toward a correct understanding of Mary, human dignity, civic duty and legality.

Father Cecchin told Vatican News that the figure of Mary is often distorted and exploited by criminal organisations as a way to make people more submissive and “turn them into slaves.”

They twist Mary’s image and acceptance of God’s will into a false role model of a woman who is God’s “slave,” compliant, submissive and passively resigned to the fate of her son, who dies at the hands of the powerful, he said.

They use religion to “enslave and not help people live an authentic religiosity,” he said.

Another problem, he said, is manipulating the Catholic faith to promote superstitions, magic and special powers to frighten and manipulate people, especially for making money off of them by promising they can be healed or have their problems solved, he added.

The main task of the pontifical academy is to offer “a healthy formation” in the study, understanding and theology of Mary, he said.

The academy seeks to keep up with and respond to new phenomena and difficulties, which is why it created the new department, which will include judges, criminologists, law enforcement, and state and church leaders “to work together for the good of the human person and society, the common home, as Pope Francis says,” Father Cecchin said.

Eradicating exploitative and unhealthy practices that cloak themselves in symbols of Catholicism will entail offering individuals and families a formation that is “truly Christian,” he said.

When asked about the practice in southern Italy of participants in Marian processions tilting the statue of Mary in a bow before the homes of presumed mafia bosses, Father Cecchin said the practice “is not religion; it is superstition.”

He said the practice suggests that Mary and even God submit to the bosses, “to teach the people that God is on their side” and it uses people’s religious inclinations “to lead them to be slaves, not free.”

Members of the new department hope to present their projects, initiatives and plans at the Sept. 18 conference, he said, with the hopes of holding a national conference every May 13 to discuss the outcomes of their efforts.

Father Cecchin said the academy is also working with Muslims and it has created a Muslim-Christian Marian commission, which will offer courses together with the mosque in Rome.

The effort is needed, he said, because experts of Islam, which recognises Mary’s divine grace, have noticed “bad interpretations of religion” and how religion is used to divide people and create problems.

“Instead, God is love, not fear or punishment,” he told Vatican News.